Over the last couple of years I have purchased a few gorgeous handmade items from AmandaAtAmersand on Etsy for giveaway prizes so when I was planning the festive giveaways this year I decided to buy one of her latest products, a Kindle Beanie. I have one myself and it's perfect for hands-free reading - I only need to move to swipe the page on my paperwhite.

This giveaway is going to work a little differently as Amanda is going to post the Beanie direct to the winner rather than sending to me to then post onto the winner. And we're going to leave it as a surprise which design the winner will receive, will it be one of these two Beanies which she has just made. 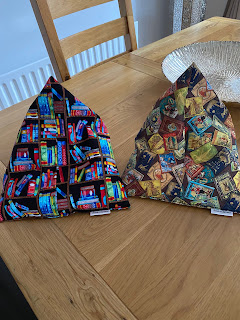 Emma's Review: We Fly Beneath the Stars by Suzanne Kelman

When the love of Tasha’s life, Luca, joins the air force to fight against the evil Nazi invaders, she knows she has to follow her heart—and him—into battle. Headstrong, impulsive and a daredevil, she’s the perfect recruit.

Tasha’s sensible older sister Nadia plans only to stop Tasha’s madness and bring her home. But a chance encounter puts her in a plane, soaring above the clouds, and she also finds her calling.

Underestimated by their superiors, Nadia and her sister find themselves in airplanes barely fit to fly, being sent on perilous missions with little hope of return. But before long their battalion is being nicknamed ‘the Night Witches’ by the Nazis, their ownership of the skies second to none.

But danger is up in the storm clouds with them, and when both sisters are shot down behind Nazi enemy lines, and taken to a brutal prison camp, they expect to never see their beloved homeland again.

Until Tasha’s eyes meet across the wire fence with someone she never expected to see again: the love of her life, Luca.

But with love comes peril… Will one sister have to sacrifice everything to save the other?

Book Links: Kindle or Paperback
Read more »
Posted by Sharon at 07:30 No comments:

How is it December already, where has the year gone? It's definitely been another surreal year for me as I'm still working from home full-time which has its advantages but I do miss the daily chats with my friends in the office. It's not quite the same virtually or by messaging.

As has become the tradition I have a few festive giveaways coming up in the next couple of weeks, the first of which is for a bundle of goodies from my box of treats. In fact, there ended up being a couple of bundles so there will be 2 winners selected, each winning one of the bundles below 😍

Paris, 1944: secret agent Juliette is on her most dangerous mission of the war so far. But then her children are kidnapped, and to get them back she may have to commit the ultimate betrayal – that of France itself…

Four years ago, when France fell to the Nazis, Juliette made the ultimate sacrifice, leaving behind her two precious children to join the Resistance and defend her country. Now a spy in Paris, she must work with Captain Daniel Diaz – an American agent she’s taken an instant dislike to – on a dangerous mission to uncover a deadly Nazi plot.

As the pair play their parts, Juliette begins to see another side to Daniel, and their feelings for each other start to grow. But just as love blossoms, Juliette receives a ransom note that changes everything. Someone in Paris knows who she is. And they’ve kidnapped her little son and daughter. The message is clear: betray your country, or you’ll never see your children alive again.

Juliette has sworn a sacred oath to save France at all costs, but she could never sacrifice her children. So, against all the odds, she decides to attempt the impossible: rescue her children and continue her dangerous work fighting the Nazi threat.

But as the mission forces Juliette and Daniel to the very brink, will they succeed on all fronts? And if not, will France pay the ultimate price, or will Juliette?

Book Links: Kindle or Paperback
Read more »
Posted by Sharon at 09:00 No comments:

Emma's Review: All the Courage We Have Found by Carly Schabowski

France, 1942: As Kasia creeps out of the farmhouse in the dead of night to transmit an urgent message, her heart pounds in her chest. Gripping her radio tightly in her hand, she feels a terrible sense of dread. She knows that this message could be the one that finally leads the Nazis to her…

Crouching in the shadows, with trembling fingers she turns the dial on her radio and hears the familiar crackle of static. Shaking, she quickly taps out her message and, holding her breath, she waits in the darkness.

Suddenly, she sees a quick flash of light out at sea. Her message has been received by the Allied boats; now they know it’s not safe to come ashore tonight.

As she looks back towards the little farmhouse, her heart catches in her throat. Inside, the two people she loves most in this world are sleeping soundly. Because while Kasia knows her messages might save thousands of soldiers, she also knows that her radio signal could bring the Germans terrifyingly close, perhaps even straight to Hugo and Elodie…

Book Links: Kindle or Paperback
Read more »
Posted by Sharon at 00:00 No comments: