Today I am proud to introduce a new feature that I'm adding to my blog which is Author Interview.  Hopefully this will turn out to be a regular feature, it all depends on the response to the emails I sent to publishers asking if any of their authors would like to take part.  I'm delighted to say that a few have agreed so there will definitely be at least 3 more! 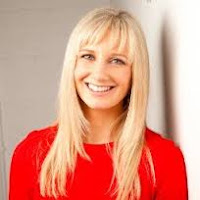 The first guinea pig, I mean interviewee, is Caroline Finnerty whose debut novel In a Moment has recently been published by Poolbeg Press.

How long did it take you to get your first book published?

I started writing IN A MOMENT while I was on maternity leave in 2009. Then I went back to work so it took me nearly a year to write 50,000 words between working full time and being a mum etc. When I heard about the Poolbeg/TV3 ‘Write a Bestseller’ competition, I wrote the other half in three months and sent it off. I was over the moon when Paula Campbell from Poolbeg called me saying I was a runner up in the competition and she wanted to offer me three-book deal!

Do you have a set daily writing routine?

At the moment, I am on maternity leave again after having twins last November, so with three small children, I definitely don’t have a set routine. My daughter is in playschool four mornings a week and this is my main opportunity to write if I can get to twins to have a nap. Some days they’ll co-operate, most days they don’t. I also try to write when everyone else has gone to bed in the evening. So it is in fits and starts that I write - if I have five minutes I run to the computer to write and close my eyes to the messy kitchen and the table covered in Play-Doh.
.
Have any of your characters in your books been based on people you know?  If so, did they recognise themselves?

Definitely not – I’d be too afraid of what they’d do to me! Sometimes I might use certain mannerisms like someone flaring their nostrils or I might rob someone’s details like their job but I always use fictional characters.

If you could write another style of genre, what would it be and why?

Popular history. I have so much admiration for the authors who write in this genre but I’m too lazy to do the research it would require.

If you could give one piece of advice to an aspiring author, what would it be?

Every writer whether they are published or not believe what they write is rubbish – it’s normal. Don’t get disheartened by your first drafts and don’t compare your work to other authors that you admire. Just keep coming back and edit, edit, edit until it is the best that you can possibly make it.

Are you able to give us a hint about what your next novel is about?  And when is it likely to be published?

It is about a girl called Lily who is facing a divorce before she is even 30 years of age and the fall-out that goes with it. It also had a sub-storyline dealing with the difficult relationship between her and her older sister Clara.

Do you have much spare time to read books?  If so, what was the last book you read or what are you currently reading?

I have to read every night or else I can’t sleep. Even if I get into bed late, I still have to read which drives my husband mad.
I’m currently just about to jump on the ‘Hunger Games’ bandwagon. It isn’t a genre I usually go for so we’ll see… and I also have Caitlin Moran’s ‘How to be a Woman’ in my to-be-read pile.

If you were going to be stuck on a desert island and could only take 3 books with you, which ones would you choose?

This is a toughie…..
‘Tom’s Midnight Garden’ by Phillipa Pearce – I LOVED this book as a child. It made me fall in love with the magic of fiction.
Marian Keyes – ‘Anybody out there’. I read this on honeymoon and I cried so much. I’ll never forget sipping a strawberry daiquiri in tropical paradise and I was lying there on my sun-lounger bawling my eyes out.
‘Starter for Ten’ by David Nicholls – because it is one of the funniest books I’ve ever read.

Can you describe 'In a Moment' in 20 words or less?

This is harder than it looks but excluding hyphens:
Couple on brink of splitting-up, single mother living in terror - in just one moment their lives cross and change forever.

Thank you Caroline for answering these and I have to say that I'm in awe of you managing to find time to write when you've got your hands full with three young children.  I seem to lose track of time when planning to do things and I've not even got children as a distraction!