One of the things I've loved since setting up this blog is discovering new authors, in particular authors who are publishing their debut books, so I've decided to launch this new feature to spotlight new authors.  First up is Alexandra Brown whose debut book, Cupcakes at Carringtons, is due to be published on 17th January. 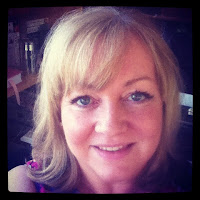 Alexandra grew up in Brighton and left school at sixteen to run away to London with dreams of being a writer. On realising that she needed a proper job too, she went to work in an office.

Throughout her twenty year corporate career, she survived many dull meetings by writing a scene or two, until she could bear it no longer and collapsed in a heap and begged her husband to support her while she lounged on a chaise and waited for the muse to arrive. He’s now living in hope that she’ll become rich and famous so he can retire to sun himself by an infinity pool somewhere exotic.

After escaping office life, Alexandra won a competition run by The London Paper to write the weekly City Girl column, an expose of working life in the City of London. She wrote the column for two years before giving it up to concentrate on her first novel.

Alexandra lives in a rural village near Brighton with her husband, daughter and two very shiny black Labradors.


Georgie Hart loves her job--running the luxury handbag concession at Carrington's Department store in the pretty seaside town of Mulberry Bay, and treating herself (once too often!) to a red velvet cupcake with buttercream icing in Carrington's café.

But Georgie is thrown into disarray when Carrington's is plunged into a recession-busting makeover, cueing the arrival of femme fatale Maxine, who wields the axe in her immaculately-manicured hands.

It spells a recipe for disaster for Georgie and soon she is fighting not only for her job, but also for the attentions of her gorgeous boss, James. And when hot newcomer Tom arrives, who may or may not be the best thing since sliced bread, Georgie must decide where her loyalties really lie...

To find out more about Alexandra and her books, her contact details are: