Today I'm delighted to welcome to the blog author Hazel Gaynor, who last night won the RNA Historical Romance award for her debut novel The Girl Who Came Home, to talk about her latest novel A Memory of Violets.

Can you tell us a little bit about your second book A Memory of Violets?
Inspired by true events, A MEMORY OF VIOLETS is a novel about the forgotten lives of London’s flower sellers in Victorian London. It tells the story of Tilly Harper, a young woman who finds the diary of an orphaned flower seller who was separated from her sister forty years earlier. As Tilly learns the fate of the long lost sisters, she begins to make sense of her own past.

It is a novel about family bonds, especially the unique relationship between sisters, and about hope and redemption. With a touch of the paranormal and an intriguing mystery at its core, I hope there is something for many readers to enjoy.

Where did the inspiration come from to write about Victorian flower sellers?
The novel was first inspired by my love of Pygmalion/My Fair Lady (I played the role of Eliza Doolittle in the school musical when I was seventeen). I wanted to understand more about the real Elizas – the young women - and children - who sold flowers and watercress on the streets of Victorian and Edwardian-era London. I also read Henry Mayhew’s, London Labour & The London Poor, in which he recorded detailed interviews with London’s street sellers in the 1800s. His interview with two orphaned watercress sellers especially resonated with me and I knew I had the basis of my story.

How much research did you have to do to enable you to write A Memory of Violets?
Loads! I love research – it really is like finding buried treasure sometimes. During the early phase of my research, I discovered the work of a Victorian philanthropist, John Groom, who took many of the orphaned, blind and physically disabled flower sellers off the streets and taught them how to make artificial flowers in a workroom of his chapel. Their work became widely known in London and eventually reached the attention of Queen Alexandra. I was fascinated by this story.

I visited the London Metropolitan Archives, where all the information about John Groom’s Flower Homes in London and his ‘Flower Village’ orphanage in Clacton are held. From newspaper reports, photographs, business ledgers, personal letters and other fascinating items, I developed a real sense of the young girls and women he had helped.

What I am always very conscious of is to not let the novel become an opportunity for me to highlight all the fascinating things I have discovered. While it is important to be authentic, I try to remind myself not to be stifled by the history, but to allow myself the creative freedom to write an intriguing novel which happens to be in a historical setting

We've had a novel about Titanic, and now Victorian flower sellers, what can we expect from you next?
We are moving to the 1920s darling! My next novel is set in post-war London and is about the rise of a young woman from chambermaid at a glamorous hotel to renowned stage star. With the current resurgence of interest in the Great War, during these centenary years, I’ve been fascinated to learn how the event affected women, both during the war and in the years following. It is a challenging project, but I’m excited to see the book and my characters coming together.

I’m also very excited to be contributing to an anthology with a group of other female authors in the US. Our nine novellas will all focus on the events surrounding Armistice Day in 1918.

How did your writing journey start?
Following redundancy in 2009. Finding myself at home with my young children I wanted to do something to earn a little money, whilst being mum. I started to freelance and wrote a parenting blog and in 2011 I wrote THE GIRL WHO CAME HOME (the second novel I’d written) which I self-published as a Kindle book in 2012. A year later, after receiving a dozen rejections for my next novel, A MEMORY OF VIOLETS, an agent in New York read THE GIRL WHO CAME HOME, contacted me and within a few months I had a publishing contract with HarperCollins for both books. I drank a lot of champagne that day!

What is the best writing advice you have ever received?
Write the book you would love to read. Don’t worry about trends and bestsellers and what the critics will think. Just write from the heart.

Do you set yourself a daily/weekly writing target?
During first draft stage I aim for 2000 words a day. I have to juggle my writing around my children and family life so I try to be flexible as to when those words might get written. I try not to write over weekends. As much as I need to protect my writing time, I also feel that I need to protect my family time.

What would you say is the hardest thing about writing?
The uncertainty. Will you find a publisher? Will anyone like the book? It keeps me awake at night!

What writers inspire you?
In a sense all other writers inspire me because I know how tough it can be to sit at that desk and write! I especially love Philippa Gregory’s take on historical fiction. I adore Rose Tremain’s characters and settings. I am in awe of Jessie Burton and I recently discovered Eva Rice, whose books are beautiful.

If you could write another style of genre, what genre would it be and why?
I’d love to write children’s books. My kids keep asking when I’m going to write a book for them. I’m working on a few ideas!

When you’ve finished writing/publish a book, do you treat yourself to a reward?
When I’ve finished the final FINAL proof read of a book and sent my notes back to my editor, I really just want a very long sleep! On publication day for the first two books, the four of us have gone to our favourite local pub for tea. I think that might become a bit of a tradition. I don’t buy myself anything as such. Just coffee with my friends and the excitement of publication day is reward enough.

If you love the sound of A Memory of Violets then you're in luck as Hazel has generously offered to send a signed copy to a lucky follower along with a floral bookmark.  Enter via the Rafflecopter form below. 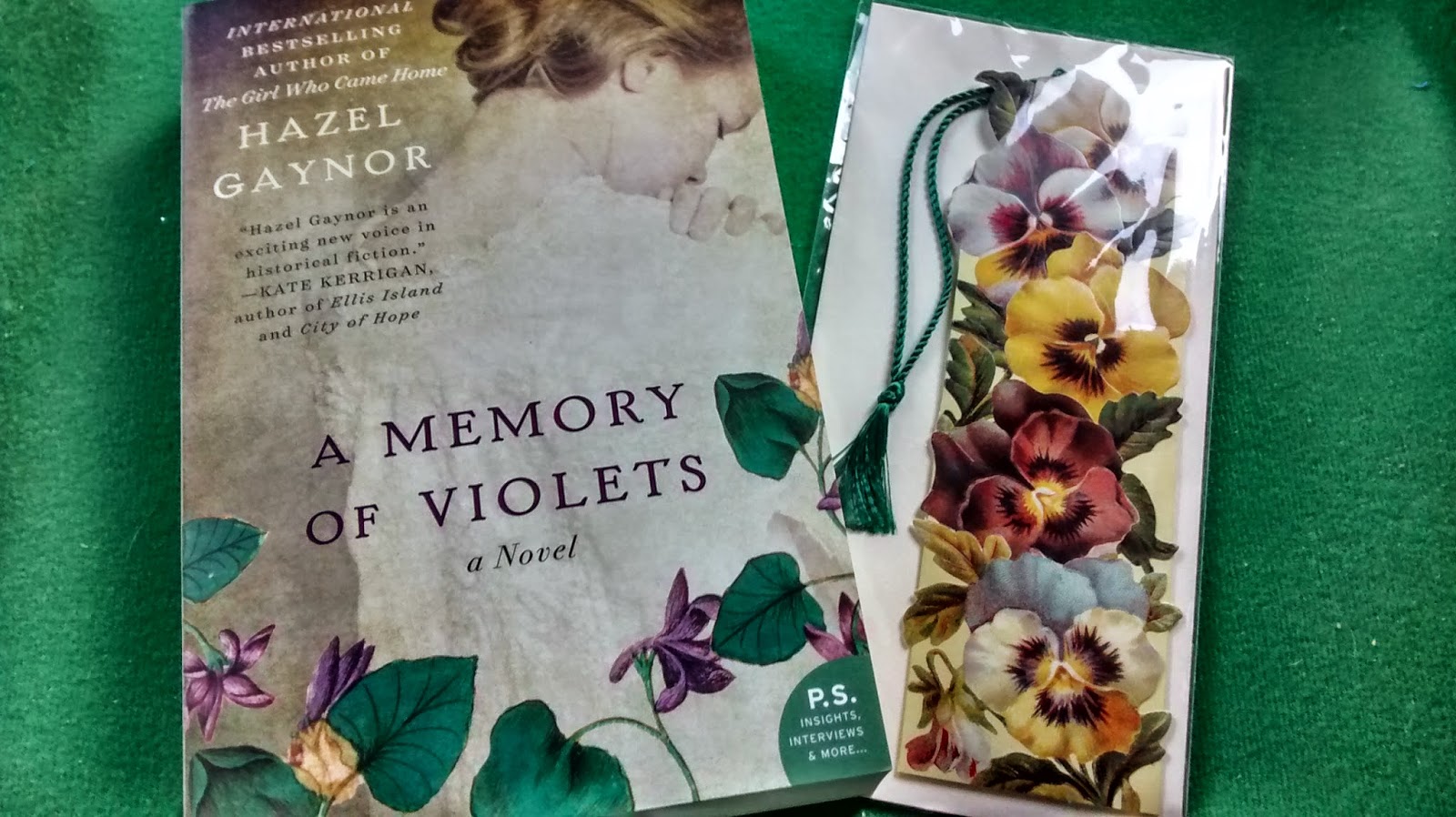 In 1912, twenty-year-old Tilly Harper leaves the peace and beauty of her native Lake District for London, to become assistant housemother at Mr. Shaw’s Home for Watercress and Flower Girls. For years, the home has cared for London’s flower girls—orphaned and crippled children living on the grimy streets and selling posies of violets and watercress to survive.

Soon after she arrives, Tilly discovers a diary written by an orphan named Florrie—a young Irish flower girl who died of a broken heart after she and her sister, Rosie, were separated. Moved by Florrie’s pain and all she endured in her brief life, Tilly sets out to discover what happened to Rosie. But the search will not be easy. Full of twists and surprises, it leads the caring and determined young woman into unexpected places, including the depths of her own heart.

a Rafflecopter giveaway
Posted by Sharon at 08:30