Today it's my pleasure to be kicking off the blog tour for Kat Gordon's debut novel The Artificial Anatomy of Parks which is published tomorrow. 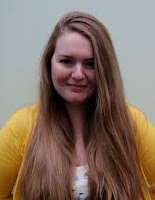 Kat Gordon was born in London in 1984. She attended Camden School for Girls, read English at Somerville College, Oxford, and received a distinction in her creative writing masters from Royal Holloway.

In between, Kat has been a gymnastics coach, a theatre usher, a piano accompanist, a nanny, a researcher and worked at Time Out. She has spent a lot of time travelling, primarily in Africa. Kat lives in London with her boyfriend and their terrifying cat, Maggie.

At twenty-one, Tallulah Park lives alone in a grimy bedsit. There s a sink in her bedroom and a strange damp smell that means she wakes up wheezing. Then she gets the call that her father has had a heart attack. Years before, she was being tossed around her difficult family; a world of sniping aunts, precocious cousins, emigrant pianists and lots of gin, all presided over by an unconventional grandmother. But no one was answering Tallie s questions: why did Aunt Vivienne loathe Tallie s mother? Who was Uncle Jack and why would no one talk about him? And why was everyone making excuses for her absent father? As Tallie grows up, she learns the hard way about damage and betrayal, that in the end, the worst betrayals are those we inflict on ourselves. This is her story about the journey from love to loss and back again.

Can you tell us a little bit about your debut novel The Artificial Anatomy of Parks?
The Artificial Anatomy of Parks is a coming-of-age-narrative about family secrets and the damage they cause, told through two interweaving storylines in the past and the present day. The Parks are a larger-than-life, eccentric family, and Tallie – the headstrong protagonist – starts off estranged from them in the present, but is gradually drawn back into their world after she hears that her father has had a heart attack and goes to see him in the hospital. There she runs into her aunts Gillian and Vivienne, and though her interactions with them, and the memories they trigger, we learn the reason behind her estrangement, and reason she’s moving towards reconciliation.

Tallulah is estranged from her family at the time of her father's heart attack, what inspired you to write about her gradual reintroduction to the family and the exploration of their past and deeply hidden secrets?
Family relationships have always fascinated me, and families in which the adults are trying to hide something from the children are even better for creating tension and momentum in a novel. Tallie’s reintroduction to her family was necessary as a catalyst for her facing up to the past, but also meant I could end the novel on a hopeful note, which was important to me.

Did you know where the story was going to go before you started writing or did it take on a life of its own?
I knew where I wanted it to end up, and I knew all of the major events in the book, but I hadn’t planned it down to the last detail – by the final draft some parts of the storyline had been beefed up a lot more, some of my characters had been taken out and some had come back from the dead (!). For my second book, which I’m currently writing, I drew up a plan in which every scene was accounted for, so there wouldn’t be so many surprises this time around.

Can you describe The Artificial Anatomy of Parks in one sentence?
News of a medical crisis concerning her estranged father prompts Tallulah Park to re-examine the events that led to their separation in a story that covers family secrets, inter-generational friendships, love, damage and medicine.

What can we expect from you next?
I’m currently working on my second novel which is set in Africa in the 1920s-1940s. It’s a fictional re-telling of real-life events, with an unreliable narrator and plenty more eccentric characters and secrets.

How did your publishing deal come about?
When I finished the final edit with my agent she sent it off to some editors and I tried to put it all out of my mind and make a start on the second novel. I had my hopes raised and disappointed a few times when an editor would try to buy The Artificial Anatomy of Parks, but the marketing teams weren’t convinced it fit in with the rest of their list. Eventually I decided to move to Reykjavik with my boyfriend (putting some real distance between me and what was going on with the book!), and a month or so after we got there, I had an email from my agent saying Call me as soon as you get this, and when I did she told me Legend Press wanted to buy it. I’m so glad now it happened the way it did, because I love my editor and the Legend Press team. So if nothing is happening with your novel, my advice is to move abroad!

Do you set yourself a daily/weekly writing target?
The target is more to write/edit for four or five hours each day (generally between 10am and 2/3pm). The word count can be anything from 400 to 2000 in that time period, so I’ve stopped trying for consistency!

Now that your dreams are about to come true, what advice would you give to anyone else who would like to write?
I think there’s a fine line you have to tread: you have to really believe in your story, and your writing, but I also think you can’t allow yourself to get too precious about it. Sometimes an agent or an editor, or your writing class, or your partner, or whoever you show your writing to, won’t like a particular aspect of the novel and you’ll disagree with them, because you know in your head what you’re trying to get across, but it generally means you haven’t quite managed it. If you go away and think about how else you might put it, it’ll probably be better for the change. But it should always be your solution, because you’re the one that knows your story inside out.

Are you going to treat yourself to anything nice for publishing your debut novel?
A holiday with my boyfriend in Italy! A week of great pasta, great wine, the sea and no editing – I can’t wait!

Have you anything exciting planned for publication day?

Maybe a glass of something sparkling with my family... I’m having a launch party the next day, so I’ll be able to celebrate with all my friends then. They’ve been so supportive of my writing that I really want to treat them to lots of wine and a big thank you.
Posted by Sharon at 06:45