This morning it's my pleasure to welcome author Liz Harris back to the blog, Liz has been a regular supporter of the blog over the last 3.5 years and it's always a pleasure to chat to her about her latest book Evie Undercover, leading men and her writing process. 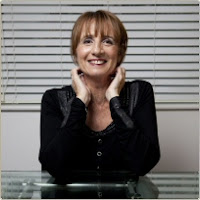 Your eBook Evie Undercover has just been published in paperback format.  Can you tell us a little bit about it?
I think most of my friends on twitter know that I love Italy. And who wouldn’t?  It’s the land of romance, music, fabulous food, wine and song. Oh, yes, and dishy men with dark brooding eyes.

I have one of those in Evie Undercover, but he’s not the hero. The hero is hunky Libel lawyer, Tom Hadleigh, from London. On a whim, Tom bought a 14th century farmhouse in Italy, which has been restored, and now needs furniture.

Enter Evie Shaw, the newest reporter on the gossip magazine Pure Dirt.  Evie, half-Italian, has been sent by her manipulative editor to do an exposé on Tom. It she fails, she’ll lose the only magazine job she’d been able to find after months of searching. But failure’s not in Evie’s vocabulary, and she’s determined to get her story.

Alas, though, the path of the investigative journalist is seldom smooth, as Evie is about to find out.

Evie Undercover is completely different to your previous historical novels, how did writing this come about?
I love reading rom coms so I’d long had it in the back of my mind that it’d be fun to write one, especially as I think a sense of humour is the sexiest characteristic for a man and writing a rom com would allow me to create such a man.

I was in Italy, having just finished writing one of my historical novels, spending the day by the pool, walking through olive groves or strolling through one of the little medieval towns that stand atop the hills, eating in the evening in one of the little local restaurants, when it suddenly hit me that there could be no better location for a rom com, and no better time to write it.

Had you visited Umbria before you started writing or how did you go about researching the area?
Once our sons were too old to want to come away with us, my husband and I started going to Umbria. It’s absolutely beautiful, and because it wasn’t easily accessible by air, it wasn’t – and still isn’t, despite the advent of economy flights to Perugia - overrun by tourists.

What three words would you use to describe Evie?
Enterprising; resourceful; fun.

What can we expect from you next?
Golden Tiger, an historical romantic novel, is being published by Choc Lit this October.  It’s set in Wyoming – yes, I’ve gone back to the American West again as I love the period. It tells the story of Charity, a Chinese girl who was found by a river when she was one-day old. The American boy who found her, Joe, aged seven, persuades his mining family to take her in. At that time, there were no Chinese in the area; in the following years, the situation was to change.

Unlike A Bargain Struck, which was set on a homestead, and A Western Heart, which was set in ranching land, Golden Tiger is set in a mining town in the south west of what was then called Wyoming Territory.

What does a typical writing day like for you?
I begin the day with a visit to twitter and Facebook. I love joining in with a conversation with friends while I have my breakfast. My husband’s not a great conversationalist in the morning, but I’m ready to start talking as soon as I get up!

On my ideal writing day, I’d sit in my study and write all day, breaking up the day with a visit to the kitchen every hour on the hour to make myself a cup of coffee. Yes, I know, that’s far too much coffee to drink. In my defence, I make it weak for that reason. I also pop into twitter and FB on occasions throughout the day.

My writing day ends when the TV News comes on at 6pm. Even though I might want to carry on writing, I stop. The day has been my time, but my husband likes us to watch the News together, talk about it and other things, and spend the evening together. So that’s what I do.

What is the best writing advice you have ever received?
Be prepared to be ruthless. If something doesn’t work in your novel, no matter how terrific you think your writing of that piece, how insightful your character presentation, how acute your description, delete it!

You will almost certainly, at some point when writing every novel, have to kill a little darling if you’re going to produce the best novel of which you’re capable.

What three essentials do you need to have to hand when writing?
Knowing where you’re going when you start your novel – not every little detail, but the arc of the story. The opening chapters introduce the story and set it in motion, so how can you do this if you don’t have any idea of your destination?

Making sure that your words, both when you’re narrating and when you’re giving your characters dialogue, are appropriate for the period in which the novel is set. You don’t want to jar the reader out of the story by making a character say something that wouldn’t have been said at that time.

For example: ‘Will you eat John?’ does not mean the same as ‘Will you eat, John?’ One comma makes the difference between John surviving for another day or ending up, garnished with parsley, on someone’s plate.

If you could write in a collaboration with another author, who would you like it to be and why?
I wouldn’t like to collaborate – not with anyone. I love writing my novels, and I love writing them alone. I create my own characters, and I live with them for the duration of the novel in the world which I’ve created. I can’t imagine enjoying a process that involved give and take in writing, which collaboration would be.

Do you get much spare time for reading yourself?  If so, what book is currently sat on your bedside table?
I read every evening when I go to bed.  During the day, I tend to read only research books that relate to the period of my wip. The exception is when I’m on holiday. Then I read everything except books for research. At present, I’m reading – and very much enjoying – You Think You Know Me, by Clare Chase.

When you’ve finished writing a book, do you treat yourself to a reward?
My reward to myself is sitting in the armchair for the best part of the following day, reading a novel that isn’t being read for research, something I normally only do on holiday or when I go to bed.

When that’s finished, I tidy my study. It always gets into a mess during the course of writing a novel, and it’s very cathartic to clear it up, ready for the start of the next book.

No other place would allow me to write surrounded by all of my dictionaries and reference books; would give me an internet that didn’t keep on disappearing just when it’s needed; wouldn’t involve wasting at least one day of travelling at each end of the stay; wouldn’t make me have to battle inwardly between a longing to lie in the sun and my desire to get on with my book.

With the money I’ve saved by not going anywhere exotic, I could pay for meals out every evening, or order in takeaways, so that I wasn’t unencumbered by knowing that domestic chores faced me at the end of my day in my idyllic retreat.

Many thanks for inviting me talk to you again, Shaz. As always, I’ve really enjoyed answering your questions.

When libel lawyer, Tom Hadleigh acquires a perfect holiday home - a 14th century house that needs restoring, there's a slight problem. The house is located in the beautiful Umbria countryside and Tom can't speak a word of Italian. Enter Evie Shaw, masquerading as an agency temp but in reality the newest reporter for gossip magazine Pure Dirt. Unbeknown to Tom, Italian speaking Evie has been sent by her manipulative editor to write an exposé on him. And the stakes are high Evie's job rests on her success.

But the path for the investigative journalist is seldom smooth, and it certainly never is when the subject in hand is drop-dead gorgeous.
Posted by Sharon at 09:30