Around the World Blog Tour: Irish Leg with Caroline James 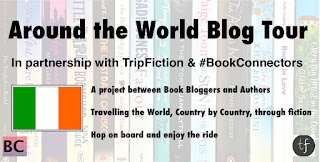 The Around The World Blog Tour is a partnership between TripFiction and #BookConnectors ~ bloggers and authors, travelling the world, through fiction.

TripFiction was created to make it easy to match a location with a book and help you select good literature that is most pertinent and relevant to your trip. A resource for armchair and actual travellers, it is a unique way of exploring a place through the eyes of an author. We blog, and chat books and travel across Social Media, and love to meet authors and bloggers as we take our literary journey.
http://www.tripfiction.com

Book Connectors  was created as a place on Facebook for Bloggers, Authors and small Publishers to share their news. We encourage book promotions; information about competitions and giveaways; news of events, including launch events, signings, talks or courses. Talk about new signings, about film deals .... anything really. Book Connectors is  a friendly group, there are no rules or guidelines - just be polite and respectful to each other.
https://www.facebook.com/groups/1466353170351020

Today it's my pleasure to welcome Caroline James to the blog as we're taking part in the Irish Leg of the Around the World Blog Tour.

So, You Think You're a Celebrity… Chef? is set partly in Ireland, what inspired you to set the story there as opposed to one of the culinary capitals around the world?
The town of Kinsale lies a short drive away from Cork on the southern coast of Ireland and plays host to the annual Kinsale Gourmet Food Festival - a renowned culinary event. My background is from the world of hospitality and I have worked with many chefs over the years. A hero of mine was the infamous Keith Floyd.

Floyd was invited to the Kinsale Gourmet Food Festival in the 90s and the residents of Kinsale took him to their hearts; he was so taken with Kinsale that he bought a property there and spent many glorious years in the delightful foodie town. I wanted to follow his footsteps and find out why he was so entranced. My first visit to the festival convinced me that the riotous goings on over the course of the festival weekend would provide the perfect setting for a novel.

Kinsale is unique - like no other foodie capital, a place where you will find Irish hospitality at its best.

Is your fictional town of Kindale , where the food festival is being held, based on an actual town or village in Ireland?
Kindale is of course Kinsale - the beautiful little port where part of the book is set. Kinsale has a thriving restaurant scene with a plethora of fine dining establishments as well as some gorgeous pubs and eateries - perfect for the make-believe world of the chefs in So, You Think You're A Celebrity… Chef?

How much research did you need to do about Southern Ireland before you started writing SYTYACC?  Had you visited Ireland in the past?
I had never been to Southern Ireland and I spent some time trawling the internet to be sure that all my facts and figures were correct before putting pen to paper. I combined this with a trip to the Gourmet Food Festival in Kinsale; which is a story waiting to be written as every hour unfolds over the course of the weekend.

The festival has many events, including The Mad Hatters Food Trail, where large groups of guests, wearing an entertaining display of headgear, are escorted by Alice in Wonderland characters, around the town to venues hosting a plethora of local delicacies and drinks. The weekend is an incredible amount of fun and having survived the mayhem and madness, I felt that the festival deserved to be included in the book as a tribute to the wonderful people of Kinsale.

SYTYACC features a gourmet food festival; do you have a favourite Irish dish that you'd like to share with readers?
My favourite dish from the festival will always be chowder. Kinsale seems to celebrate chowder and holds chowder cook offs and competitions. Wherever you go, there is always a heartwarming bowl of this delicious comfort food and it is something I anticipate with joy on return visits. My own recipe for chowder can be found here: http://www.carolinejamesauthor.co.uk/recipes/savoury-recipes

If SYTYACC was to be made into a TV series or a film, who would your dream cast be?
Mickey -  Ian McShane
Hilary -  Christina Hendricks
Long Tom - Jeff Bridges
Bob -  James Dreyfus
Kenny - James Corden

If you had to describe SYTYACC in one sentence, what would it be?
I love this quote from a reviewer:  "AbFab does MasterChef in a Soap!"

Finally tell us a little bit about yourself.
My books reflect my love of the hospitality industry, an environment I have always worked in. From college onwards I progressed through the trade and there isn’t a job I haven't done, from pot washing to cooking. I have owned a pub, country house hotel and several different businesses and always knew that there was a wealth of information just waiting to be turned into stories. It is a great business. Dealing with the public on all levels creates many incidences and often chaotic events - perfect scaffolding to weave a story around.

I have always wanted to write but never had the courage and am hugely thankful that I made a decision to get on with it and not go to my grave wondering. My debut novel Coffee, Tea, The Gypsy & Me shot straight to #3 on Amazon and was Ebook of the Week in The Sun and my next book, Coffee, Tea, The Caribbean & Me will be published in 2016 as part of a continuing series.

I love anything to do with food and am never happier than when in the kitchen, cooking for friends and family.  Cooking is like writing - it nurtures the soul and the end result can be enjoyed and shared for the pleasure of all.

Thank you so much for hosting me on your lovely blog and as they say in Ireland - I hope you enjoy the craic!

Mix together…
A tough-cookie media agent who's clawed her way to the top, and a con-man who wants to open a cookery school. Add in a washed-up celebrity chef whose career needs re-building…

Flavour with…
An aging rock star fresh from rehab, and a Sloane Ranger food writer who gets her own TV show…

Bring to the boil…
At a Gourmet Food Festival, in Ireland, where anything goes!

When media agent Hilary Hargreaves travels to Ireland to look at a campaign for a new cookery school, she meets a blast from her past - the romantic but feckless chef Mickey Lloyd, who is hell-bent on resurrecting his flagging career. Her tough demeanour is rocked as it becomes apparent Mickey's intentions involve more than a stint behind a stove in his quest to pursue her. But as plans for the school gain momentum, she realises that she's developing more than a passing interest in reformed alcoholic Long Tom Hendry, who owns the crumbling old mansion where the school will be homed. Hilary has many ingredients to juggle with her demanding client list - which looks set to boil over if she doesn't keep control. From London's bustling Soho, to Southern Ireland and the sunny shores of the Caribbean, has Hilary got too much on her plate and is she really prepared to risk it all for love?

Amazon UK: So, You Think You're A Celebrity... Chef?