Today it's my pleasure to introduce to you GJ Minett whose debut novel The Hidden Legacy was published as an eBook yesterday and will be released as a paperback in 2016 by Twenty7. 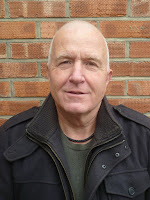 G.J Minett studied Languages at Churchill College, Cambridge before teaching in Gloucestershire and West Sussex. In 2008 he finished a part-time MA in Creative Writing at the University of Chichester. He wrote the first chapter of The Hidden Legacy as part of his course and the piece subsequently won both the inaugural Segora Short Story Competition in 2008 and the Chapter One Competition in 2010. The prize for the latter involved a chance to work editor Baden Prince Jr to finish the novel. Graham is currently working on his second novel, The Goose Drank Wine.

He lives with his wife and children and still works at Angmering School in West Sussex. @GJMinett

An MA in Creative Writing is no guarantee of success and may not suit everyone but I have no hesitation in saying it was the right decision for me. I started the course at the University of Chichester because, after years of submitting short stories and novels to agents and publishers without making a breakthrough, I knew it was time I tried something different. It wasn’t an easy decision – for one thing even a part-time MA over two years isn’t a cheap option and I was also having to combine it with a full-time job which made significant demands on my time out of hours. There didn’t seem much point though in treading the same weary path as before. I wasn’t beating down any doors. To be honest, I wasn’t sure I was even leaving a scratch.

If I had to name three things that the MA taught me that made the crucial difference, I’d go for the following:


The submission which won the Chapter One competition were produced on the MA course and now form the prologue and opening section of my debut novel, The Hidden Legacy.

Coincidence? I don’t think so.

1966. A horrifying crime at a secondary school, with devastating consequences for all involved.

Recently divorced and with two young children, Ellen Sutherland is up to her elbows in professional and personal stress. When she's invited to travel all the way to Cheltenham to hear the content of an old woman's will, she's far from convinced the journey will be worthwhile.

But when she arrives, the news is astounding. Eudora Nash has left Ellen a beautiful cottage worth an amount of money that could turn her life around. There's just one problem - Ellen has never even heard of Eudora Nash.

Her curiosity piqued, Ellen and her friend Kate travel to the West Country in search of answers. But they are not the only ones interested in the cottage, and Ellen little imagines how much she has to learn about her past...
Posted by Sharon at 06:45