Today it's our stop on the Fever City blog tour and it's my pleasure to welcome Tim Baker to the blog to tell us about his debut fiction novel. 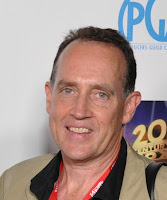 Born into a showbiz milieu in Sydney, Tim Baker left Australia to travel in his early 20s and lived in Rome and Madrid before moving to Paris, where he wrote about music and worked in film. He later ran consular operations in France and North Africa for the Australian embassy, liaising with international authorities on cases involving murder, kidnap, terrorism and disappearances.

His fiction includes the collection of short stories, OUT FROM THE PAST, and his film work includes writing the feature film SAMSARA. He currently lives in the South of France with his wife, their son and two rescue animals, a dog and a cat. He is working on several novels, including a sequel to FEVER CITY.

Nick Alston, a Los Angeles private investigator, is hired to find the kidnapped son of America's richest and most hated man.

Hastings, a mob hitman in search of redemption, is also on the trail. But both men soon become ensnared by a sinister cabal that spreads from the White House all the way to Dealey Plaza.

Decades later in Dallas, Alston's son stumbles across evidence from JFK conspiracy buffs that just might link his father to the shot heard round the world.

Can you tell us a little bit about your debut novel FEVER CITY?
I’d be glad to, but first thanks for having me on your blog!

Fever City is a complex yet fast-paced noir thriller set in Los Angeles in the early 1960s, with an important contemporary component set in Dallas in 2014.

At the heart of the novel are three great mysteries. The first involves the sensational kidnapping of the only son of America’s richest and most hated man. The second concerns a plot to assassinate JFK, and the third – the contemporary component – portray’s a son’s efforts to unravel the secrets behind his late father’s involvement in both cases.

It’s the kind of book that would appeal to people who like sophisticated, richly-imagined noir thrillers like The Big Sleep, Chinatown and LA Confidential – but with a contemporary spin.

Describe FEVER CITY in one sentence.
A frantic search for a kidnapped child collides with a plot to assassinate JFK.

How did your writing journey start?
I’ve always been an avid reader, and started writing my own stories when I was a kid, and really got serious about it in my late twenties when I wrote a lot of short stories and tried to find my own voice and style.

After I was lucky enough to publish a collection of short stories in my late twenties with William Collins, I decided to write a novel. Half way through, I suddenly saw how the story led to a second, related novel, and began writing that one as well, in case I lost the thread.

Fast forward fifteen years and I had eight novels all going simultaneously and all still unfinished!

To make matters worse, I was co-writing screenplays with partners all over the world, running consular operations for France and North Africa for the Australian embassy in Paris, and trying to spend as much time as possible with my son who was in primary school. And I wasn’t getting any younger!

At a certain point I realized that I had to initiate a dramatic change in my life if I were ever going to re-focus my attention on fiction.

So without any regrets, my wife and I decided to quit our jobs. We sold up and moved to a small town in the South of France, where I’ve been able to start applying myself to finishing everything I started.

Of course old habits die hard and I’ve begun a few more new books, but have finally finished the first one, FEVER CITY, and have several more novels in very advanced stages.

I wouldn’t recommend this approach to other writers, but on the other hand, everyone is different and has their own way of dealing with their work…

Describe a typical writing day.
A typical day for me would be summer, because it’s my favourite season. I love the festive atmosphere and the long, lingering days, when you feel as though you could accomplish anything you set out to do.

So it’s summer, and I start writing around 5am, which of course is the best time of day.  I work for a couple of hours, walk the dog, eat breakfast, return to writing and then break around 10:30 and go for a swim.

Swimming for me is part stretching exercise, part meditation, and I often unconsciously solve writing problems while swimming.

I write for a couple more hours after lunch, then late in the afternoon I’ll either go for another swim, or a sail, or take out a paddleboard.  A glass of rosé, followed by dinner at home or a picnic with friends. A good day will usually end with a walk down to the port for an ice-cream or a bike ride to a neighbouring village to see a film in the open-air cinema.

What can we expect from you next?
A thriller about two women’s efforts to combat political corruption and narco terrorism in Mexico, and a first contact book based on a true story, about an Anglo-French joint expeditionary force’s encounter with an indigenous community in northwest Australia. I’m co-writing that one with an old friend – indigenous activist, musician and film-maker, Wayne Jowandi Barker. It promises to be sensational.

What advice would you give to other aspiring writers?
Considering my odd journey, I’m not really in a position to offer any advice. I do believe however that you need three things to break into publishing today: talent, tenacity and timing. By timing I mean getting your manuscript into the right hands at the right moment.

It’s a balancing act and to some extent out of your hands. So the only thing you can ever really do is keep trying and keep writing until that magic moment arrives.

Are you going to treat yourself to something nice to celebrate publishing your debut novel?
Yes, the completed manuscript of my next book! And I have a funny feeling that a lunch with my wife and son on a terrace overlooking the sea is a distinct possibility…