Today it's my stop on the Wicked Game blog tour and it's my absolute pleasure to be able to introduce you to author Matt Johnson in this debut spotlight feature.

Matt Johnson served as a soldier and Metropolitan Police officer for twenty-five years. Blown off his feet at the London Baltic Exchange bombing in 1992, and one of the first police officers on the scene of the 1982 Regent’s Park bombing, Matt was also at the Libyan People’s Bureau shooting in 1984 where he escorted his mortally wounded friend and colleague, Yvonne Fletcher, to hospital. Hidden wounds took their toll. 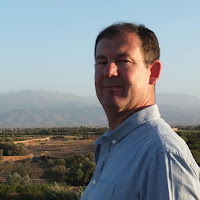 In 1999, Matt was discharged from the police with Post Traumatic Stress Disorder. While undergoing treatment, he was encouraged by his counsellor to write about his career and his experience of murders, shootings and terrorism. One evening, Matt sat at his computer and started to weave these notes into a work of fiction that he described as having a tremendously cathartic effect on his own condition. He has used his detailed knowledge and memory to create a fast paced, exciting and authentic tale of modern day policing. Wicked Game was the result. Matt is currently working on a sequel Deadly Game.

Can you tell us a little bit about your debut novel Wicked Game?
Someone asked me recently what genre the book is. I struggled to answer the question. Although Wicked Game is a story of modern-day policing, it’s also a tale of secrets, betrayal, loyalty and comradeship. It is a crime thriller, but the crime is terrorism and the book has also been described as part police procedural and part spy thriller.  What it is definitely not is a ‘lads only’ book.

The main protagonist is Robert Finlay, a veteran cop who has recently married and has a young family. Just as he seems to be getting his life on track, his past catches up with him when several former military colleagues are murdered and he is, clearly, a target to meet a similar fate. How he reacts to the threat and how he tackles it forms the basis for the story.


I've read that you were encouraged to write about your own experiences to combat PTSD, had you ever considered writing beforehand?  How hard was it to put pen to paper and let the memories appear?
I used to write a little as a police officer, but only speeches and retirement-do odes. The prospect of penning 90K words or more for a novel didn’t occur to me. When I first started, it was very challenging. But I found that by sticking at it, the discomfort eased and, before too long, I started to enjoy the experience. The appearance of memories was often very difficult, and I escaped to the countryside outside my home to clear my head. Sometimes it was days before I could go back and face it all again.


How did your writing journey progress from writing for therapy to deciding to write a novel?
During counselling, I became too emotional to effectively communicate. It was suggested that, in between sessions, I could write down descriptions of my experiences, reactions, emotions, etc. and then bring my notes in for the counsellor to read. One day, she commented on how much she enjoyed my writing and said, ‘Have you ever considered writing a book?’ The idea was firmly implanted. After that, it was something I felt I had to do. I bought a couple of ‘how to’ books on creative writing and then sat down at the PC to try and weave my counselling notes into a novel.


If you had to describe Robert Finlay in three words, what would they be?
That’s quite a tough one. Let’s just say that he is resourceful, determined and loyal.

Like you, your main character suffers from PTSD. To what extent is Robert Finlay you, and how much creative licence have you used?
Wicked Game isn’t auto-biographical and, fortunately for me, I have never faced the dangers that Finlay faces. But, there is a lot of me invested in him. The symptoms he suffers, I am familiar with, the way he reacts to challenges is based on my solutions. He isn’t me, but he does reflect many aspects of my personality.


There are some beautiful descriptions of the Welsh countryside, as well as some gritty and incredibly accurate images of London. Were these harder to write than the action-packed parts of the book?
Although I worked in London for many years, I have lived in the countryside for at least as long. It is my home and the place where I am most comfortable. Writing about it, describing it and the challenge of finding words to portray its qualities are a challenge I enjoy. I’m very flattered that you use the word ‘beautiful’ as that is how I view the countryside and what I have tried to describe.


You originally self-published Wicked Game, how did the publishing deal with Orenda Books come about?  And did you treat yourself something special to celebrate your book deal?
I used the KDP self-publishing system after having had a few knock-backs from literary agents. The book did surprisingly well. Then I had a stroke of luck. A writer called Antony Loveless was in Afghanistan working on a book about a Chinook helicopter pilot when he spotted a crewman reading a kindle. He asked the lad what he was reading and the response was to tell Antony about this ‘great book’ he’d found. It was my book. Antony downloaded it himself and read it. He liked it so much he recommended me to his agent and they got in touch with me. Then came the hunt for a suitable publisher. After a few false starts, I was introduced to Karen Sullivan from Orenda. I was hugely impressed my Karen’s energy, drive and enthusiasm. And did I celebrate? Well, yes. In Wales we have a very special whisky called Penderyn. It’s my favourite, by far, and I treated myself to a wee dram.


Describe your writing process, are you a plotter or see where the story takes you writer?
Very much the latter. I had an idea of how the story would start, but this changed, and changed again. I enjoyed the ride that the characters and the plot took me on. Sometimes I headed off down a blind alley, a development didn’t work and I had to cut it. But I never throw anything away. One day, that material may appear in another story!


What’s your favourite scene from the book? And how did it make you feel writing it?
Goodness, that’s a tough one.  There are so many I enjoyed creating. One favourite would have to be the scene where the main protagonist, Finlay, is describing the birth of his daughter. As I wrote the words I knew that, one day, my daughter would read them and realise I had been writing about her birth. It was an emotional experience at the time and writing about it brought back much of that emotion. I just hope she likes it.


The dialogue drives your book, and its authenticity is obvious. Did you find it easy to write these parts of the book?
Yes, and no. With so many years service behind me, I know how both cops and soldiers speak, how we converse. But that style of conversation doesn’t always translate well to a novel. For example, service language can be stilted and full of slang and acronyms. Creating authentic dialogue that is easily understood by all proved a challenge. I had a great deal of help in this from the editing team at Orenda who taught me several approaches to writing dialogue and helped me to vastly improve my self-published original. The words may still be mine, but bringing them to the page is very much a result of what I was shown.


What books do you like to read in your spare time, and can you recommend a good one?
I don’t read many and, I confess, I’m a slow reader and easily distracted. I also have very eclectic taste. I like thrillers, science fiction and historical novels and I read more reference books that I do fiction. What is most important to me is the ‘story’ in the book. So long as that engages me, I will keep reading. I love a book that I cannot wait to get back to. Two books did that for me last year. The first was a book I read on holiday. It was The Bees by Laline Paull. This really appealed to me as I keep bees and enjoy looking after them. I now find myself referring to them using the names from Laline’s book. The second was How To Be Brave by Louise Beech. This book particularly appealed to me as a parent with a daughter as I asked myself how I might have coped with the challenges faced by the characters in this story. Louise’s writing flows and really engaged me. At this very moment I’m just on to the second chapter of Stasi Child by David Young. I’m hooked already and can’t wait to sit down this evening with this book and a glass of my favourite whisky!


What’s next?
I want to continue to improve my writing. I’ve learned a lot in the last year from the editing team at Orenda. I now have plans for two follow-on books to continue with Finlay’s story. Having seen him survive Wicked Game, I’ve grown quite attached to him!

2001. Age is catching up with Robert Finlay, a police officer on the Royalty Protection team based in London. He s looking forward to returning to uniform policing and a less stressful life with his new family. But fate has other plans. Finlay’s deeply traumatic, carefully concealed past is about to return to haunt him. A policeman is killed by a bomb blast, and a second is gunned down in his own driveway. Both of the murdered men were former Army colleagues from Finlay’s own SAS regiment, and in a series of explosive events, it becomes clear that he is not the ordinary man that his colleagues, friends and new family think he is. And so begins a game of cat and mouse a wicked game in which Finlay is the target, forced to test his long-buried skills in a fight against a determined and unidentified enemy.


Wicked Game is a taut, action packed, emotive thriller about a man who might be your neighbour, a man who is forced to confront his past in order to face a threat that may wipe out his future, a man who is willing to do anything to protect the people he loves. But is it too late?
Posted by Sharon at 10:00