Today it's my pleasure to be shining the spotlight on author Rachael Featherstone ahead of the publication of her debut novel Puzzle Girl next month which I'll be reviewing for Rachael's blog tour. 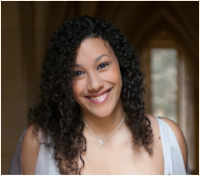 Rachael Featherstone was born and raised in Woodford. After reading Mathematics at New College, Oxford university, Rachael went to work in research. When Rachael's mother was diagnosed with terminal cancer in 2012, Rachael decided to take a chance, quit her job, and fulfil a life time ambition to write a novel. She went back to university and completed a Masters in English Literature and had several short stories published. Rachael now lives in Hampshire with her Husband, Tim. Puzzle Girl is Rachael's debut novel.

If you had to give an elevator pitch for your debut novel Puzzle Girl, what would it be?
When clued-up career girl, Cassy, finds herself stuck in a doctors’ surgery, a cryptic message left in a crossword magazine sends her on a search to find the mysterious Puzzle-man behind it.

I love the idea of Cassy searching for her 'Puzzle Man', where did the inspiration come from for this storyline?
There are some incredible stories out there about love at first sight. But I was intrigued by the idea of finding love without that initial visual spark – love without sight. Is that even possible? To fall for someone before you’ve even seen a picture of them? The idea really built over time. I spent a lot of hours in hospital waiting-rooms with my mum and I think that’s where the initial thought came to me, as I sat, staring at the stack of old magazines.

Did Puzzle Girl turn out the way you had planned or did Cassy's search take you on a few twists that were not initially planned?
Not at all! In fact, in the first draft, Puzzle-man turned out to be a different person to who it is now! Puzzle Girl is full of twists and turns and several took even me by surprise.

Describe Cassy in three words.
Intelligent, perfectionist, hopeless-romantic. (Is that last one cheating?)


How did your writing journey start?
When my mum was diagnosed with terminal cancer, I quit my job and took six months off to spend time with her. I also set myself the goal of writing a first draft of a novel and Puzzle Girl was born.

Did you treat yourself to something special to celebrate your publishing deal?
My husband took me out for a lovely meal at our favourite restaurant in the New Forest. He also made me a card on Moonpig that I absolutely love.

Have you anything exciting planned for publication day?
I am ridiculously excited about 16 March. I’ve made my husband take the day off work. There is definitely going to be a celebratory lunch but even more exciting is that there is going to be lots happening on social media. Cassy and Puzzle-man have their own twitter accounts (@_Puzzle_Girl and @Puzzle_Man_) and there will be lots of prizes to win and a twitter party at 7.30pm host by The Writing Garnet’s Kaisha (@kaishajayneh).

Finally what can we expect from you next?
Lots! I’ve been working on two romantic comedies simultaneously. I’m reaching the final stages of editing and hoping to find them a home soon.

Love is a riddle waiting to be solved…

Clued-up career girl Cassy Brookes has life under control until one disastrous morning changes everything.

When she finds herself stuck in a doctor’s surgery, a cryptic message left in a crossword magazine sends her on a search to find the mysterious ‘puzzle-man’ behind it.

Cassy is soon torn between tracking down her elusive dream guy, and outwitting her nightmare workmate, the devious Martin.

Facing a puzzling love-life, will she ever be able to fit the pieces together and discover the truth behind this enigmatic man?