Today it's my pleasure to welcome Louise Walters back to the blog so that we can find out about her new book A Life Between Us which is published next week. 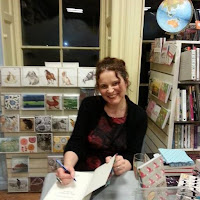 Can you tell us a little bit about yourself and your writing journey?
I’m a mother and wife, a “homemaker”, and my passions in life are reading and writing.  My first novel Mrs Sinclair’s Suitcase was published in 2014 by Hodder. I’m now bringing out my second novel A Life Between Us, as an indie, or hybrid, author.

If you had to give an elevator pitch for A Life Between Us, what would it be?
Middle-aged woman seeks the truth about the death of her twin sister forty years before, and uncovers some dark family secrets.

Where did the inspiration come from to write a story about twins?
I started off with a single character, Tina, and the twin sister came to me later on. At first Meg was Tina’s friend. But I felt the bond needed to be stronger, so she became Tina’s twin sister.

Did you do much research into twin relationships and the impact of a sole survivor?
To be honest, I didn’t research that topic much. I researched more on the social history side of things, in the 50s, 60s and 70s. Tina is just Tina, and I feel I got to know her inside out, so I didn’t feel I needed to research her situation. I did look into bereavement counselling and how that tends to work.

I love the cover for A Life Between Us with its shadow of one twin facing the surviving twin, did you have much creative input into its design?
I knew I wanted a strong cover image, and when I hired the super-talented Jennie Rawlings to design it, I sent her a few stock photos I had been looking at. I told her a bit about who I thought my readers are, and we took it from there. This was the first concept Jennie came up with and I was, and always will be, thrilled with it.

You have decided to self-publish A Life Between Us, what was your reasoning behind this?
I’ve spoken about this on my blog and elsewhere, but the bottom line is I didn’t get a deal for A Life Between Us (my second novel). I was attracted to the idea of self-publishing (I’m a bit of a control freak!) and the idea of over-seeing everything and making my own decisions, and hiring the professionals of my choice to work with, was very appealing. I have to say, despite the stresses and the hours and hours of work, self-publishing has been a wonderful experience. It’s boosted my self-confidence and unlocked some creative abilities I didn’t know I possessed.

If you get a block during the initial writing phase, how do you work your way through it?
I am fortunate in that I haven’t yet experienced writers’ block. It isn’t easy to write a first draft, in fact for me it’s the most difficult part of the whole process, but I’ve not been blocked… yet!

What essentials do you need to have close to hand when you are in writing mode?
I can write anywhere, anytime, but I like to type straight onto my laptop. I have notebooks but they are for ideas, research and lists!

As someone who has published books both traditionally and self-published, have you any advice for anyone who is thinking of writing a novel?
Well, the best advice I think is to not think about publishing at all while you are writing. Write the novel you want to read. Edit, edit, edit, let somebody else read it… get it critiqued if you can… and then think about whether you would like to get it published. Then you have options: agent/ trade publishing, or self-publishing. Both routes are really exciting!

Finally what can we expect from you next?
I’m working on a third novel, which is actually the very first I wrote. It wasn’t very good, and many writers have that unpublished “apprenticeship” novel. I’m working on it again and actually I think it might make the grade. So that’s my current project. I would love these characters and this story to see the light of day… we’ll see.

Tina Thornton's twin sister Meg died in a childhood accident, but for almost forty years Tina has secretly blamed herself for her sister's death. During a visit to her aging Uncle Edward and his sister Lucia, who both harbour dark secrets of their own, Tina makes a discovery that forces her to finally question her memories of the day her sister died. Who, if anyone, did kill Meg?

As Tina finds the courage to face the past, she unravels the tangled family mysteries of her estranged parents, her beautiful French Aunt Simone, the fading, compassionate Uncle Edward, and above all, the cold, bitter Aunt Lucia, whose spectral presence casts a long shadow over them all.
Posted by Sharon at 06:30