As much as I love reading books by my favourite authors I also love discovering new authors, who will hopefully join my list of favourite authors, and 2017 is certainly looking like it's going to be a bumper year for discovering authors to add to this list.  Today it's my pleasure to be featuring Alice Feeney whose debut thriller Sometimes I Lie is published on 23rd March. 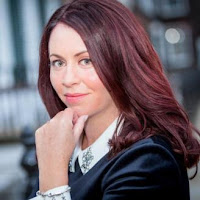 Alice Feeney is a writer and journalist. She has spent 15 years with BBC News where she worked as a Reporter, News Editor, Arts and Entertainment Producer and One O'Clock News Producer. Alice is a recent graduate of the Faber Academy Writing a Novel course. Alice has lived in London and Sydney and has now settled in the Surrey countryside, where she lives with her husband and dog.

This time last year, I was busy scribbling my first draft of Sometimes I Lie. I wrote this novel while working full time as a producer on the BBC’s One O’clock News, so some parts were written in my garden shed at home, but others were written on the train to work or in my lunch breaks.

If you told me back then that it would be a real book less than a year later, I wouldn’t have believed you!

The last few months, being approached by agents and publishers, has been the most wonderful whirlwind! An amazing agent called Jonny Geller took a chance on me and my novel, and has since sold it around the world. I’m now able to write full time, which has always been my dream, and I feel incredibly lucky.

Sometimes I Lie is a dark and twisty psychological thriller. The story begins with a short note from the protagonist…

My name is Amber Reynolds. There are three things you should know about me:

Amber is in a coma, but this is a story about a woman who needs to wake up in more ways than one.

It’s a story about the lies we routinely tell ourselves as well as those we tell others. It’s about how we become different versions of ourselves to suit the people around us. And how, when you spend too long pretending to be someone you’re not, you can forget who you really are. It’s a very dark, twisty story about whether we can ever really know a person, including ourselves.

Thank you SO much for reading Sometimes I Lie. 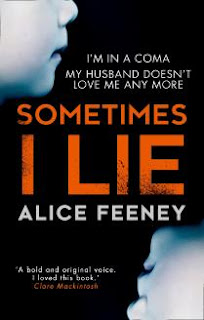 I don't know about you but I can't wait to read Sometimes I Lie which is calling me from my TBR pile and thanks to Lucy at HQ, I have 3 proof copies to give away.

a Rafflecopter giveaway As with all giveaways on the blog, this one is open to existing followers of the blog as a thank you for your support.  The winners will be selected at random when giveaway ends and contacted for their postal addresses so that I can pass the details onto Lucy to post the books to them. NB. Please do not add details of this giveaway to other sites without my permission.
Posted by Sharon at 09:15