Today it's my pleasure to welcome Amanda James back to the blog for a chat about her new book Behind The Lie which was published last week.

Can you tell us a little bit about yourself and your writing journey?
Hi Sharon, it’s great to be here today and thanks for inviting me. 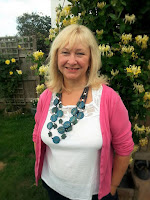 I have always written since I was a child. Sometimes it would be poems, songs and often short stories. I never thought that one day I’d be published though.  But about fifteen years ago I started writing seriously – novels mostly. They got nowhere because I didn’t really know how to write! I had great ideas and plots, but the telling left much to the imagination. I read about writing, read lots of novels and practised, and I eventually got a short story published in 2010. That was for Gentle Footprints, an anthology to raise awareness for Born Free. Because of this I found myself on stage at the hay Festival next to Virginia McKenna. I read an extract of the story to a thousand people and decided I quite liked this writing malarkey! Then in 2011 I had my first novel published and Behind the Lie will be my seventh. I have other unpublished ones (some are a bit quirky!) - So altogether I have written a total of twelve so far.

If you had to give an elevator pitch for Behind the Lie, what would it be?
A young woman loses one of her twins near to the end of her pregnancy, but is this terrible tragedy really down to 'just one of those things’, or is there something more sinister behind her son’s death?

The birth of a child should be a happy occasion, what inspired you to write about a woman pregnant with twins and the subsequent trauma /grief of having to deal with the death of one of her babies?
I have no idea. Often ideas just come to me, mostly when I‘m out walking on the beach. The day I had the idea for this book I was on the beach, which I now know as Holly’s beach, my main character. I looked up at a gorgeous house overlooking the ocean and imagined who lived in it and what their story was. The bare bones of Holly’s story appeared and I filled in the gaps over the next week or so.

Did you do much research about stillbirths and grief before you started writing Behind the Lie?
Yes. I think it’s important to try to get things right. Over the years I have known people that have lost a child too, sadly. And while writing the story I had to deal with illness and diagnosis of a terminal disease of someone I’m close to. As a writer, all experiences affect your writing, good or bad.

The cover is very dramatic, did you have much creative input into its design?
Yes, I was asked for the kind of cover I envisaged, and I think HQ has done a really great job!

What does a typical writing day look like for you?
I don’t really have one. I’d like to say that I write every day, but tend to fit writing around family commitments and sometimes I don’t write for a few weeks. Then sometimes I binge- write for days at a time.

If you get a block during the initial writing phase, how do you work your way through it?
I don’t really get a block, luckily. But I do have tricky problems to overcome sometimes. Then I normally take a step back for a while and get out of the house. Often a solution comes when I least expect it.

What essentials do you need to have close to hand when you are in writing mode?
Lots of wine and savoury snacks. No, seriously, I need access to a kettle and quiet. I write at home, mostly in bed. I used to write at a desk looking out towards the ocean in the far, far distance, but I found I was gazing more than writing.

Finally what can we expect from you next?
Another suspense called The Other Mother, also set in Cornwall. It’s about a young woman’s search for her birth mother, but when she finds her, she begins to wish that she hadn’t.

Who can you trust, when you can’t trust yourself?

Holly West has turned her life around. She’s found a successful and loving husband in Simon and is expecting twins. She is definitely a woman who has taken back control of her future.

Until she gives birth, only for one twin to survive. Holly can’t let it go.

Holly’s world is in a tailspin and suddenly she can’t trust herself or anyone else. No one believes her, not her husband or her best friend. Because she thinks she knows the truth…her son is still alive and she won’t stop until she finds him.
Posted by Sharon at 06:45