The Write Stuff with... Tarn Richardson

Today it's my pleasure to be handing over the blog to local author Tarn Richardson to talk about why he wrote, or anyone should consider writing, a trilogy.

Writing a novel is not easy. Look at the number of people who have tried to write one and failed. It takes persistence, determination, belief, motivation, ideas (lots and lots of ideas!), faith and courage, a good year of your life and a steely skin to handle all the rejection, criticism and ridicule from readers, critics and family alike.

So, considering how hard it is to write a single novel, why would anyone in their right mind want to try their hand at writing a trilogy, three interlinked books dragging the reader through a lavish set up, an intriguing middle and a jaw-dropping, heart-pounding finale?!

Well, quite simply because it’s great fun! Yes, it’s a demanding and, at times, depressing undertaking that takes up years of your life (for me it was four and a half years of my life given over to The Darkest Hand trilogy). It also probably helps if you’re lacking a little in the sanity stakes (don’t worry if not, you will be by the end!).

But there’s nothing like that sense of achievement when you’ve produced, made or done something HUGE - and writing a trilogy is huge. Not much comes bigger, in a literary sense, at least.

Writing a trilogy opens up a whole new side to yourself, things about you that you never realised; your ability to manage thousands of facts, juggle timelines, organise teams of bit part actors, ‘become’ your main characters in thought and voice, and, perhaps, most importantly of all, discover that you do have the talent, the patience and the strength to stay the course and finish your epic work.

You learn so much about yourself when you write a trilogy and, if you do manage to finish it, you’ll admire yourself more than you ever did before (the hating yourself and your workload phase will pass over time) and find you walk just a little taller amongst your peers.

Remember: many try to write a single standalone novel and fail. Even fewer consider a trilogy and of those who do take on the task, only a tiny percentage of those finish it.

Write a trilogy, and you’re part of an elite exclusive group of writers within the whole of the world.

In a standard novel, you have anything between 80,000 and 120,000 words to tell your tale. It’s enough to tell a very good story, but there’s only so much you can say within that number of words. The pages, paragraphs and lines have to focus on the characters, the predicaments within which they find themselves and what they do to get themselves out of them.

Now, give yourself 500,000 words and suddenly you have the scope and opportunity to go big, bigger than anything you can fit in a single slim volume, big enough to explore every aspect your world, the places, the cities, the climate, the ecosystems, the different people, races, trade agreements, wars, fragile peace treaties, past atrocities and bitter crimes against whole countries, heaven or even hell. The world, quite literally, is your oyster.

Take, for example, The Hobbit. It is a magnificent story, but very focused on a single adventure. ‘There and back again’ it was co-named (along with the title The Hobbit), and that’s because that’s exactly what it told the reader. A story about going to one place, and coming back again from it.

But The Lord of the Rings, that is an entirely different proposition. “N (for Necromancer) is not child’s play,” as Tolkien himself said when it was done. The trilogy gave the timespan, the words and the pages to allow him to bring his entire world to life in the minds of his readers, a world that was as huge and as rich our own real world. As a result, LOTR is something far richer, far deeper, darker, more terrifying and wondrous than The Hobbit, far more epic than a single novel could ever be.

This ‘space’ to write, this opportunity to reach beyond the confines of a precise story, is a huge honour and privilege that only a few writers choose to take on. It’s not easy. It might well be the hardest thing you’ll ever attempt to do (it was for me), but once done, when you sit back with your cup of tea (or something stronger) and toast your achievement, that feeling is quite unlike anything else.

Of course, it goes without saying that if you’re going to tackle writing a trilogy you need that BIG idea, something that holds up across all three books. It needs to be big enough to warrant three books dedicated to it and have enough wow and wonder to sustain the reader’s interest.

And make no bones about it, writing a trilogy is hard work. It tests a writer in their plotting, characterisation, language, patience, determination and belief, not to mention energy and use of English like nothing else. Writing a trilogy is all consuming. It never gives you a moment’s peace for all the times you’re writing it and it’ll compromise your friendships, your health and sanity. But, for all that, it’ll also be the greatest thing you’ll ever achieve!

If you’re considering writing a trilogy, I am delighted. Best of luck, and may the words flow easily across all your pages!

If interested in reading my work, my trilogy is called The Darkest Hand, published by Duckworth Overlook (in the UK and Australia) and Overlook Press (in the US and Canada). The Damned (book 1) and The Fallen (book 2) are available now in the UK from all the usual places and all good bookshops, whilst the third final part, The Risen is released on 18th May. 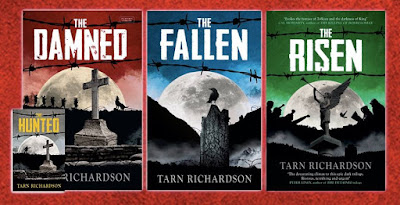 You can also download the free novella prequel to the trilogy, The Hunted from Amazon and iBooks.

Email ThisBlogThis!Share to TwitterShare to FacebookShare to Pinterest
Labels: Books, Tarn Richardson, The Write Stuff with...