The Write Stuff with... Zygmunt Miloszewski

Today it's my stop on the #PolishBooks blog tour with a post 'Things you should know about translated Polish crime books' from author Zygmunt Miloszewski. 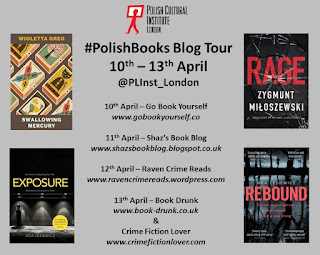 1. The beginning is always innocent. You find out that your book is going to be translated into a foreign language. You start to radiate euphoria. You put down the deposit for a two-seater sports car, invite your friends for dinner, and brag about your international career. You know that there’s someone out there who’s going to be your translator, but you don't worry about that yet. You’re glad you’re going to have another fan of your work, who will be down on her knees before you and your talent. A few months later she gives you a call. She's not a fan. She isn't down on her knees. She has a long list of mistakes you made in your novel. Holes in the plot, dates that are wrong, misspelled names. And another list, of your favourite stylized passages that need to be edited or deleted because no one’s ever going to understand all this Polish blah.

2. What matters in a crime story is its rhythm – it has to have a flow that the readers can follow. There’s a risk that during the translation process  some passages might turn into rocks, sticking out of the stream. Things like social or political comments, for instance, that can only be understood in the author's homeland. Or intertextual references to local culture. Or names that are too similar, or too unpronounceable. These elements have to be identified, but can’t just be deleted, because the novel should be comprehensible, while also remaining exotic and noticeably Polish to encourage investigation.

3. Comedy in crime fiction should be compulsory. After Rage was published in Polish, one of the journalists commented: ‘It put me in an awkward situation. I had just read a passage about domestic abuse that was so dark and intense that I could hardly bear it, and then few pages later I was laughing out loud as I read a different bit. And I felt guilty. Isn’t it rather inappropriate to write crime novels that are also funny?’ I replied that not only is it appropriate, but it ought to be compulsory. Firstly, even in a crime story people take breaks from the killings. They investigate, talk, drink cups of coffee, have sex, and live a normal life ‒ and normal life is funny.

4. I wouldn’t call crime fiction an emerging genre. As everywhere, it’s one of the most popular and eagerly read forms of literature, and it always has been. However, for many years after the fall of the wall, the Poles wanted to read translated crime fiction, even of the lowest quality, because it was Western, and Western was better, Western is how we have always wanted to be described. But time passed, we started to catch up, and developed an appetite for our local literature, including local crime fiction set within the world as we knew and experienced it. Now Polish crime writing is flourishing and includes some excellent writers, so I truly hope the wave of Slavic corpses will wash away the Nordic ones.

Zygmunt Miloszewski is an award-winning Polish novelist and screenwriter.

His first two mysteries featuring prosecutor Teodor Szacki, Entanglement and A Grain of Truth, have received international recognition making him the #1 bestselling author in Poland and one of the world's best-known contemporary Polish writers.

All eyes are on famous prosecutor Teodor Szacki when he investigates a skeleton discovered at a construction site in the idyllic Polish city of Olsztyn. Old bones come as no shock to anyone in this part of Poland, but it turns out these remains are fresh, the flesh chemically removed.

Szacki questions the dead man’s wife, only to be left with a suspicion she’s hiding something. Then another victim surfaces—a violent husband, alive but maimed—giving rise to a theory: someone’s targeting domestic abusers. And as new clues bring the murderer closer to those Szacki holds dear, he begins to understand the terrible rage that drives people to murder.

Thanks to Olivia at Midas PR I have a copy of Rage to give away to a follower of the blog. Enter via the Rafflecopter form below, giveaway is open to UK or Ireland residents only.  The winner will be selected at random when giveaway ends and contacted for their postal address to pass onto Olivia to post the book to you.

a Rafflecopter giveaway
Posted by Sharon at 06:20