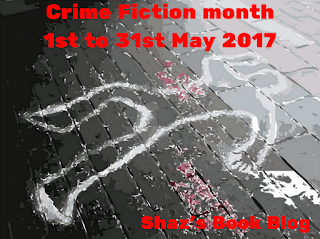 Today is the start of a new feature month on the blog, during May I'll be bringing you a combination of guest features, reviews and giveaways but although the month will predominantly feature a mixture of all things crime, there will also be a few non crime-related posts for blog tours I'd already agreed to host.

So to kick off Crime Fiction month I've bought a trio of Cosy Crime books to give away, I've not read any of these myself but they came highly recommended in the shop. 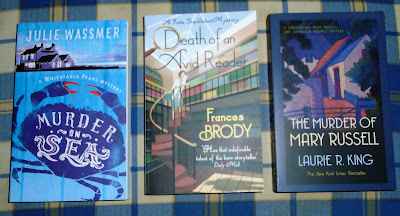 Murder on Sea by Julie Wassmer (I didn't realise when I bought this that it was book 2 in a series but hopefully it will still read OK as a standalone.)

It's not the season of good will to all men...

The festive month is kicking off in style and Pearl is rushed off her feet with her restaurant, The Whitstable Pearl. She's also busy planning her own family Christmas and providing mulled wine for a charity church fundraiser when Christmas cards begin arriving all over town - filled with spiteful messages from an anonymous writer.

Pearl's curiosity is piqued but having pledged not to take on a case at her detective agency before Christmas, she reluctantly agrees that Canterbury's DCI Mike McGuire should take over; poisoned pen cards are after all a matter for the police. And with only the church fundraiser now between Pearl and Christmas, she invites McGuire along as her guest. The event appears to be a great success; St Alfred's church hall is packed and Pearl happily finds herself standing close to McGuire beneath some mistletoe . . . but then a guest suddenly collapses. Too much of Pearl's delicious mulled wine - or could it be something more sinister?

The last thing Pearl expects for Christmas is murder but soon the bodies are piling up. Can Pearl possibly solve the mystery in time to make 25th December an unforgettable day - or will the murderer contrive to ensure her goose is well and truly cooked before then?

Death of an Avid Reader by Frances Brody (how could I resist this one when it features a library!)

A lady with a secret
Kate Shackleton's sterling reputation for courageous sleuthing attracts the attention of the venerable Lady Coulton. Hidden in her past is a daughter, born out of wedlock and given up to a different family. Now, Lady Coulton is determined to find her and puts Kate on the case.

A mysterious killing in the library's basement
But as Kate delves deeper into Lady Coulton's past, she soon finds herself thrust into a scandal much closer to home. When the body of the respected Horatio Potter is found in the Leeds Library basement, the quiet literary community is suddenly turned upside down with suspicions, accusations and - much to Kate's surprise - the appearance of a particularly intelligent Capuchin monkey!

The most puzzling case in Kate's sleuthing history yet
Convinced an innocent man has been blamed, Kate sets out to discover the truth. Who would want Dr Potter dead? Does Lady Coulton's missing daughter hold a vital clue? As the stories start to emerge in the seemingly quiet Leeds Library, Kate is learning fast that in this case, she can't judge a book by its cover . . .

The Murder of Mary Russell by Laurie R. King

Mary Russell is used to dark secrets - her own, and those of her famous partner and husband, Sherlock Holmes. But what about the secrets of the third member of the Holmes household: Mrs. Hudson? Russell’s faith and affection are suddenly shattered when a man arrives on the doorstep claiming to be Mrs. Hudson’s son.

What Samuel Hudson tells Russell cannot possibly be true, yet she believes him - as surely as she believes the threat of the gun in his hand. And when the scene is discovered - a pool of blood on the floor, the smell of gunpowder in the air - the most shocking revelation of all is that the grim clues point directly to Clara Hudson.

To uncover the truth, a frantic Sherlock Holmes must put aside his anguish and push deep into his housekeeper’s secrets - to a time before her disguise was assumed, before her crimes were buried away.

There is death here, and murder, and trust betrayed. And nothing will ever be the same.

So if you fancy reading this trio of Cosy Crime reads enter via the Rafflecopter form below.  As with all giveaways on the blog, this one is open to existing followers of the blog as a thank you for your support.  The winner will be selected at random when giveaway ends and contacted for their postal address to enable me to post the books to them. NB. Please do not add details of this giveaway to other sites without my permission.