Today it'st my absolute pleasure to be shining the debut spotlight on author Audrey Davis whose debut novel A Clean Sweep was published earlier this Summer. 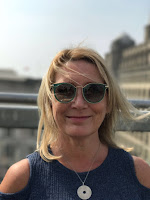 Audrey Davis is a Scottish-born former journalist and mother of two grown-up boys. She spent many years living in Singapore, Australia and Buckinghamshire before settling in Switzerland in 2002.

Her hobbies and interests include reading, watching scary movies and going to the gym, although the latter is more of a necessity. Chiefly because her main pleasure – after writing – is cooking and eating.

Recent years have seen Audrey involved in major house renovations. These have proved extremely challenging, not least because of her appalling French. However, she does provide endless amusement for the local workforce.

It was always a dream to write a novel and, after many false starts, Audrey published her debut novel – a romantic comedy entitled A Clean Sweep – in early June 2017 on Amazon. This was closely followed by a short prequel – A Clean Break – which examines the crumbling lives of two of the characters in the main book.

Audrey is now working on what she hopes will be a series of books. Still with a strong romantic comedy element but also with a hint of the supernatural …

Where did you get the inspiration for your book?
The seeds of my story were sown many years ago when not one but two incredibly handsome chimney sweeps turned up on my doorstep. It’s the law in Switzerland that chimneys are swept once a year. Those seeds took a long time to grow but – having done an online Writing Fiction course – they began to form into a narrative about a younger man and an older woman. The title came first, the rest followed but certainly not in an organised fashion! It required a lot of rewriting and editing at the end. I aim to be more structured in the future!

What advice would you give to aspiring writers?
Just write! I know everyone says that, but it’s so true. Don’t agonise over what you’re writing or if it’s grammatically perfect etc. Keep building up the word count (but try to have a story arc otherwise you’ll end up tied in knots with plot inconsistencies and sequence boo-boos). Create something, ideally get it professionally critiqued and proof read and feel very proud.

What’s the best bit about being a writer?
I guess it’s the freedom to work anywhere, at any time and on any device. I usually write at my desk – strewn with toast crumbs and scraps of paper – but I can also write sitting at an airport, outside on the terrace or on the sofa when my husband is watching something boring. And it’s been the biggest thrill next to having my gorgeous boys (OK, that wasn’t so much a thrill as pure agony, but the result was worth it) to see my book published.

What’s the hardest part about being self-published?
Undoubtedly the marketing side. I have had to teach myself everything about promoting my book, using social media and persuading people to post reviews. I spend hours looking at sites, both free and paid, that offer advice. Some of it is helpful, a lot is completely mind-boggling for a novice like me. There are days when I wonder how anyone ever writes another book, as keeping up to date with a blog, Facebook page, Twitter feed and all the other stuff is so time-consuming. 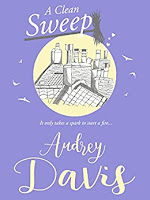 Fifty-something widow Emily is reasonably content with life, until a chance encounter with a much younger chimney sweep turns her world upside down. Is the age gap too big an obstacle or will love conquer all?

Daughter Tabitha is living with Tom, but feels there’s something missing. Meanwhile, her Abba-obsessed boss Meryl thinks she’s found her Prince Charming after a lifetime of frogs. Are they both right, or dating Mr Wrong?

Emily’s sister, Celeste, has it all. The perfect marriage, home and wardrobe. But there are skeletons in her immaculate closet and a fitness band could derail her life.

Susan is the go-to woman for gossip. She knows everything but people don’t know her. Lonely, overweight and pining for a lost love, she can’t imagine a happy ending.
A Clean Sweep is a laugh-out-loud tale of love, lies and second chances.
Posted by Sharon at 06:40