Today it's my pleasure to welcome author Julia Thum, one half of the writing duo that makes up Ginger Black, to the blog to talk about their debut novel Riverside Lane. 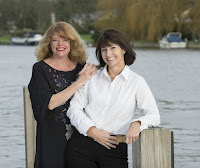 I am really thrilled to be a guest on your lovely blog.  Thank you so much for having me.

I have been writing in some form or other for my whole life.  With a librarian for a mother and a father who died young it seemed only natural to commit my thoughts and feelings to paper and I have never really looked back.  I have always been a keen diary writer and written children’s stories for over twenty years.

I left Somerset for London at 16, founded & ran my own consumer P R agency representing a range of international brands including many years with my favourite - Ladybird Books.  I sold the business and trained as a psychotherapist specializing in eating disorders & hosted a phone-in show on Radio Luxembourg.

A husband, five children and a few years later the Thum family moved from London to Bray and I took up writing fiction seriously.   As well as writing with Gaynor I now write and review children's books and am a regular guest on BBC Radio Berkshire’s Book Club programme.

Can you tell us a little bit about yourself and your writing journey?
I have been writing children’s fiction for over twenty years (a novel for each of my five kids) but had not submitted anything for publication until I met Gaynor and we wrote the cozy mystery Riverside Lane together.  Working with Gaynor, and the success of our first novel, has given me the confidence to submit some of my other work and The Witches Punchbowl, magical realism targeted at middle grade readers, will be published in 2018.

Gaynor and I, writing under the pen name Ginger Black, are mid-way through our second adult novel together – more of that later – and I have embraced the middle grade fiction market by launching a children’s book website featuring story telling blogs and book reviews (Julia Thum).

Beyond writing and reading, I keep myself busy caring for my family, working for a fabulous charity that takes disabled children out on the Thames, kayaking, yoga and walking my English Bulldog Rumpole who is the unofficial third member of the Ginger Black writing partnership. 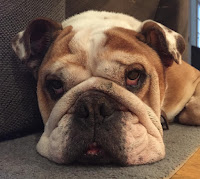 How did your writing collaboration come about?
Gaynor and I met a few years ago through our kids.  We found we had a shared interest in writing fiction though she was a busy newspaper journalist at the time and I had just finished  twenty years in consumer PR.  It transpired that our early careers had been a series of sliding doors with us moving in the same professional circles but never meeting along the way. I’m glad we missed each other though, because when our paths finally did cross it was at a time we both felt ready to jump in at the deep end and give novel writing a go.  Riverside Lane is the result.

If you had to give an elevator pitch for Riverside Lane, what would it be?
A wry, affectionate look at what would happen if you parachuted a mysterious international spy into a quintessentially English village.

Which character did you have the most fun creating?
Ooh that’s difficult.  I think probably Bianca because she is funny and irreverend and oblivious to the social protocols that secretly matter so much in English villages.

Did you treat yourself to something special to celebrate your publishing deal?
Absolutely.  In true ‘cozy mystery’ style we spoilt ourselves with a huge pot of tea and two massive slices of carrot cake in the fabulous café at our local library!

Finally what can we expect from you next?
We are working on a sequel to Riverside Lane and hoping that the next ‘Ginger Black’ novel will be finished by spring.  Riverside Lane is set in the culinary village of Bray-on-Thames (where we both live) and our next story takes us upstream to Cookham, a village best known as the setting for Wind In The Willows and the Stanley Spencer gallery.  Whereas Riverside Lane has ‘foodie’ undertones to reflect Bray’s famous restaurants (The Fat Duck and The Waterside Inn) our next novel, also based on a house swap, will be arty - in keeping with Cookham’s creative heritage - and have a plot link to the Hammer House of Horror studios (on the banks of the Thames just outside Cookham.)

Luca Tempesta, a handsome American with a secret, gets off a plane at Heathrow and heads for a quiet village by the Thames, taking time out, it would appear, for a holiday in the tranquil English backwater.

The local pub, a fine restaurant, church and boat house are where the locals gather, and here Luca discovers an odd assortment of characters: the seemingly wealthy and polished set, others trying hard to make their way into higher society, and curious villagers with surprising stories to be revealed.

As Luca tries to find anonymity, he soon realises that The Village is not such an easy place to hide.

A former spy, a gameshow host, a model, a journalist, the vicar and a biker all play a part in making up the village scene, with secrets lurking at every twist and turn of the river and when Luca’s mysterious past, along with those of other villagers, is finally revealed and he prepares to leave the village, he takes with him much more than he bargained for.

Set against the cinematic backdrop of a gastronomic village by the Thames, Riverside Lane is a thrilling, vivid page-turner that seeks to understand human behaviour hard-wired for desire, power, love and possession in a traditional society threatened by extraordinary challenges.

Beneath a taut, fast-moving plot, the upstanding residents of Riverside Lane watch and whisper behind a mask of English hauteur whilst their own bipolar lives start to unravel.
Posted by Sharon at 06:30