Today it's my pleasure to be shining the spotlight on indie author Patricia M Osborne and her debut novel House of Grace which was published earlier this year. 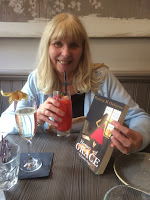 Patricia M Osborne was born in Liverpool and spent time in Bolton as a child. She now lives in West Sussex. Apart from novel writing, Patricia writes poetry and short fiction. Her poetry and short stories have been published in various literary magazines and anthologies. She is studying for an MA in Creative Writing with University of Brighton. Patricia has recently become Poet in Residence at a local Victorian park.

House of Grace is her first novel.

Can you tell us a little about yourself and your writing journey?
Hi Sharon,

Thank you for inviting me on your Spotlight Feature. In answer to your question, I’ve been writing poetry since I was five years old, in fact I won my first competition when I was about six. It was called Clothes but I can’t remember anything else about it. In 2011 when I was studying for my BA degree with the Open University, I decided to take up the creative writing module. It was a shock when I first started because learning the technical details stifled my creativity. However, after spending the summer working on prompts for fun, I found my creativity returned but better because I could use new skills that I’d learned through the course.

In 2013 for my dissertation I decided to write a screenplay. When writing the script, I discovered that there was a was a lot more story to be developed so for the first time in my life I attempted to write a novel. And I managed it. I wrote House of Grace, A Family Saga, my debut novel.

In the autumn of 2014, after losing my mum, I decided to return to study to help give me some focus and signed up for a Masters in Creative Writing with Brighton University. I’m still studying for that now at a snail’s pace and plan to do my dissertation 2017/18 to complete my degree.

As well as writing novels, I also write short stories and poetry. I am Poet in Residence at my local Victorian Park which I love. The park has a lake and wonderful grounds so a great place to gain inspiration.

Where did you get the inspiration for your book?
Inspiration for House of Grace came from a few triggers. The protagonist, Grace, was born from George Orwell’s, Road to Wigan Pier. Inspiration was also drawn from the TV programme, Mr Selfridge, and House of Elliott for those old enough to remember the latter.

Bolton has impressionable memories as I lived there from aged seven to eleven years. I therefore decided to set a big chunk of Part I of my novel in Bolton. I’m also drawn to writing in the fifties and sixties, my favourite era for story.

What made you decide to self-publish?
My novel was set aside once I started my MA as I was too busy working on assignments. However, last year I attended Swanwick Writers’ Summer School for the first time and I was so inspired and impressed by authors there and their books that I decided this year my book would join theirs in the Swanwick Book Shop, and it did.

What is the hardest part about being self-published?
The hardest part is probably the marketing as it takes up writing time. It’s also important to believe in yourself as you must promote yourself and your book. I’m learning my way around Social Media and everything is starting to come together.

Did you treat yourself to something special to celebrate your publication?
I shared a bottle of Prosecco with my husband when the novel first went live and a week later I met a university writer friend for lunch and we went to Food for Friends in Brighton to celebrate my birthday and the launch of House of Grace.

Finally, what can we expect from you next?
I’m working on the second in the series of House of Grace and aiming to release The Coal Miner’s Son by March 2018. However, this date is up for review but I am trying to stick to it if possible because my readers are waiting. I’m planning the saga to be a trilogy but it has the potential to go on further. I also plan to release a poetry collection within the next year.

It’s 1950 and all sixteen-year-old Grace Granville has ever wanted is to become a successful dress designer. She dreams of owning her own fashion house and spends her spare time sketching outfits. Her father, Lord Granville, sees this frivolous activity as nonsense and wants to groom her into a good wife for someone of his choosing...

Grace is about to leave Greenemere, a boarding school in Brighton. She’s blissfully unaware of her father’s plans when she embarks on a new adventure. The quest includes a trip to Bolton’s Palais where she meets coal miner, Jack Gilmore. Grace’s life is never the same again.

Travel with Grace through two decades as she struggles with family conflict, poverty and tragedy. Is Grace strong enough to defy Lord Granville’s wishes and find true love? Will she become a successful fashion designer? Where will she turn for help?

http://mybook.to/HouseofGrace
Posted by Sharon at 09:15