Today it's my pleasure to be featuring author Isabella May and her debut novel Oh! What a Pavlova which is published next week. 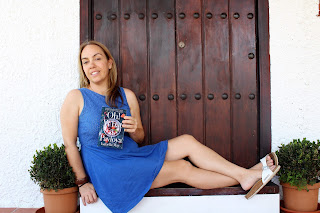 Isabella May lives in (mostly) sunny Andalucia, Spain with her husband, daughter and son, creatively inspired by the sea and the mountains. When she isn’t having her cake and eating it, sampling a new cocktail on the beach, or ferrying her children to and from after school activities, she can usually be found writing.

As a Co-founder and a former contributing writer for the popular online women’s magazine, The Glass House Girls – she has also been lucky enough to subject the digital world to her other favourite pastimes, travel, the Law of Attraction, and Prince (The Purple One).

She has recently become a Book Fairy, and is having lots of fun with her imaginative ‘drops’!

Oh! What a Pavlova is her debut novel.

Can you tell us a little bit about yourself and your writing journey?
I’m a debut novelist, still getting my head around the fact that this time last year I was polishing my manuscript… and now, here we are: launch day is almost upon us!

I live on the Costa del Sol, in an area that’s not too touristy, neither too posh (thank goodness on both counts!) with my young family. We’re surrounded by the beach and mountains and I am pretty sure that if it hadn’t been for our move here six years ago, I’d never have found the inspiration that has worked its way into my stories. There’s something really magical about this place.

I’ve been scribbling away forever really. As a school girl, I’d be the one sneakily passing around folded up concertinas of paper (aka. the game ‘Consequences’) in the classroom; as a ‘grown up’ I revelled in compiling essay style emails laced with humour to tackle customers’ late delivery complaints/ask for a pay rise/insist I had created the next Big Thing that my Directors simply had to develop into a product.

Eight years ago, my second child was sadly stillborn when we lived in the UK. Tragedies such as this, as devastating as they are at the time, always offer a gift. Mine was being introduced to a place called Rock Bottom which led me to re-evaluate my entire life and the things that truly mattered. I have climbed back up since, I am happy to say - and I now spend my life doing only the things I love. It’s also my homage to my daughter.

If you had to give yourself an elevator pitch for ‘Oh! What a Pavlova’ what would it be?
‘Oh! What a Pavlova’ is quite unlike any other novel you have ever read before. It dares to straddle genres and break traditional writing rules whilst covering a wide range of subjects; it paints a very different picture of domestic violence; its foodie descriptions will turn even the ‘cleanest’ of eaters into sugar-fuelled Cake Monsters; it will make you laugh out loud when you least expect it - courtesy of its jump-off-the-page characters, and it will take you on the most exciting armchair travels from Glastonbury to Bologna, Singapore to Oslo, Porto to Krakow… and everywhere else in-between.

Where did the inspiration for ‘Oh! What a Pavlova’ come from?
Quite simply, I had a burning desire to dispel the myth that an abusive relationship is abusive all the time. I think that’s a narrative which keeps far too many women and men in relationships which do not serve them.

Describe Kate in three words.
Ooh! That’s a tough cookie… I guess I would say inspired, semi-enlightened and ambitious. There are so many more words to sum up the protagonist of ‘Pavlova’, but these are the ones that first spring to mind.

Did you treat yourself to something special to celebrate your publishing deal?
I’ll let you know when the first royalty statement comes in!

I signed the contract for this novel on a Monday, so it was a nice cheap bottle of Spanish supermarket Cava until the next weekend when we went out for a celebratory meal and cocktails.

Have you anything exciting planned for publication day?
Yes, I will have an online launch party on my alter ego’s Facebook page to thank family and friends for their mammoth support. But ‘Isabella May’ will host another identical launch party, a few days later for those readers who follow her author Facebook page. Star prize is a box of gourmet (and I mean gourmet!) Macarons delivered straight to your front door. There are also two further prizes where readers will literally have the opportunity to appear in novel number two next year. Definitely worth entering!

Finally what can we expect from you next?
Well, I’m very pleased to say, The Cocktail Bar, novel number two mentioned above, is being published on 13th February! It’s another tale based in Glastonbury (we’ll also see a little of Mexico and Prague). Here’s the blurb:

Rock star, River Jackson is back in his hometown of Glastonbury to open a cocktail bar… and the locals aren’t impressed.

Seductress Georgina is proving too hot to handle, band mate Angelic Alice is messing with his heart and his head, his mum is a hippie-dippy liability, his school friends have resorted to violence – oh, and his band manager, Lennie AND the media are on his trail.

But River is armed with a magical Mexican elixir which will change the lives of the Three Chosen Ones. Once the Mexican wave of joy takes a hold of the town, he’s glad he didn’t lose his proverbial bottle.

Pity he hasn’t taken better care of the real one…

Connect with Isabella via:

Kate Clothier is leading a double life: a successful jet-setting businesswoman to the outside world, but behind closed doors, life with Daniel and his volcanic temper is anything but rosy.

Some days – heck, make that EVERY day – cake is her only salvation.

Slowly but surely, the cities she visits – and the men she meets – help her to realise there IS a better future.

But will she escape before it’s too late?
Posted by Sharon at 06:15