Today it's my pleasure to be shining the debut spotlight on editor Phoebe Morgan and her debut novel The Doll House rather than on one of the authors she works with. 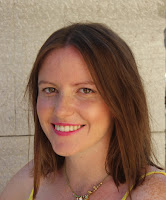 Phoebe Morgan is an author and editor. She studied English at Leeds University after growing up in the Suffolk countryside.

She has previously worked as a journalist and now edits crime and women’s fiction for a publishing house during the day, and writes her own books in the evenings. She lives in London and you can follow her on Twitter @Phoebe_A_Morgan.

The Doll House is her debut novel.

Corinne’s life might look perfect on the outside, but after three failed IVF attempts it’s her last chance to have a baby. And when she finds a tiny part of a doll house outside her flat, it feels as if it’s a sign.

But as more pieces begin to turn up, Corinne realises that they are far too familiar. Someone knows about the miniature rocking horse and the little doll with its red velvet dress. Someone has been inside her house…

How does the stranger know so much about her life? How long have they been watching? And what are they waiting for…?

Sound intriguing?  Thanks to Phoebe I have a short extract below to share with you.  I have already bought a copy of The Doll House that I'm hoping to read sooner rather than later once I reduce my TBR a bit 📚📚📚

I am tugging on Mummy’s coat, my fingers clutching the thin black fabric of it as though it is a life raft. Mummy’s eyes don't move; her gaze doesn't falter. It is as if I have not spoken at all.

Minutes pass. I begin to cry, small, quiet sobs that choke in my throat, sting my cheeks in the wind. Mummy takes no notice. I push my palms into my eyes, blotting out the last remnants of light in the shadowy garden around us. The darkness continues to fall, but still Mummy stares, glassy-eyed. She doesn’t comfort me. She just stares. I bite down hard into the flesh of my cheek, harder and harder until I can taste a little bit of blood on my tongue.

I’m trying to be quiet, trying not to make a sound. Mummy tells me that I shouldn’t complain, that we’re just playing the game. But it’s too cold tonight, and I’m hungry. The chocolate bar I had at school is swirling around in my stomach. I don’t think I’ll get anything else tonight, not if we don’t see them soon.

In the winter time it’s always cold like this, but Mummy never lets us leave. In the summer time it’s better, sometimes the game is almost fun. The garden is the best part, I like the way the grass feels against my knees, and the way the hole in the fence fits me perfectly, like it’s been built just for me. I’m really good at getting through it now, I never even snag my clothes any more. I’m almost perfect.

Now though it’s freezing and my hands are red, they burn like they’re set on fire. I squeeze my eyes tightly shut and pretend that it’s summer time, all nice and warm, and that I can feel the rays of sun on my back from where I’m hiding. In summer I get to see animals. They have rabbits in cages but I don’t go near those any more. One time I did, I crept right up to the cage and put my fingers through the gap, touched one of the bunnies on his little soft nose. But when Mummy realised, she got very angry, she said I had to stay back in the shadows. She says the bunnies don’t belong to us. So I don’t see them any more, but I do get to see the little hedgehog that lives near the fence, and all the creepy-crawlies; the worms and the beetles that Mummy says I oughtn’t to touch. I do touch, though. I push my fingers into the dirt and pick them up, lay the worms flat on my hand and watch them wriggle. I don’t think they mind. It’s nice to have things to play with. I’m usually by myself.

Mummy suddenly leans forward, grabs my frozen hand in hers. I can feel the bones of her hand against mine, clutching me tight. It hurts.

‘Do you see them?’ she says, and I open up my eyes, blink in the darkness. It’s almost fully dark now but I look at the golden window, and I do see them. I see them all. My heart begins to thud.