Today I'm handing the blog over to Emma to interview bestselling author Gill Paul about her latest book Another Woman's Husband which Emma recently reviewed here. 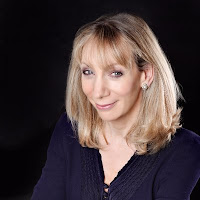 Can you tell us a bit about yourself and your writing journey?
Another Woman’s Husband is my seventh published novel. I feel incredibly, unbelievably lucky to find myself in this position, but it took a lot of trial and error to get here. I started and abandoned loads of novels in my twenties and early thirties before joining an excellent creative writing group called WritingSpace, run by a woman called Carol Cornish. The novel I wrote under her guidance became the first one to be published. It wasn’t plain sailing, though, because my first two novels didn’t sell very well so I didn’t get a deal for a third. I wrote non-fiction for a while before I had the idea for my Titanic novel Women and Children First and managed to get a deal from Avon, which took me back into fiction again. Champagne corks were pinging around that day, let me tell you!

The publication of Another Woman's Husband is very timely considering it is the anniversary year of Princess Diana's death. Did you feel the weight of expectation when writing the book as Diana meant so much to so many people?
I was concerned not to cause distress to any friends or relatives of Diana’s. Her death is so recent that she is in the living memory of many, and that puts additional pressure on anyone writing about her. I decided not to make her a character in the novel as such, but to write about the historical phenomenon of the public reaction to her death. One character, Alex, is a TV producer who is researching the conspiracy theories around it, while his fiancé Rachel thinks the poor woman should be left in peace and can’t understand the mass public grieving.

I found the opening chapters very emotional as Rachel and Alex come across the accident involving Princess Diana in a Paris tunnel. Did writing these scenes make you cry? If not were there any other points in the book you found emotional/challenging to write?
I tried to channel the shock and disbelief I felt myself when Diana died in 1997 and to give a flavour of the emotion of the time for readers who are too young to remember. I can’t remember if I cried while writing this section but I certainly did later when writing about Mary’s fate (spoiler alert).

What drew you to write about Wallis and her story? What made you include Mary Kirk as opposed to solely focusing on Wallis?
I think there’s been a lot of misogyny in the portrayal of Wallis over the years, with predominantly male writers focusing on her visits to Chinese brothels and the men she may (or may not) have had affairs with. I wanted to look at her in a more sympathetic light, and seeing her through the eyes of her best friend seemed a useful way to do this. I have a school friend whom I’ve known since the age of 8 and I think she knows me better than anyone else in the world, even my partner. I’ve never come across any book or film featuring the Mary Kirk story in the forefront, but she was critical in Wallis’s life up to the abdication crisis and I thought her story deserved to be told.

Everyone has their own opinion on Wallis as she became synonymous in history for the repercussions her affair with Prince Edward had. What is your own opinion of her and did this viewpoint change the more research you did whilst writing the book?
I wanted to find the real Wallis behind the bitchy caricature of popular imagination, and I did end up feeling a mixture of sympathy for her and admiration for her sparky intelligence and lively wit. You can’t overlook the fact that she broke up Ernest Simpson’s first marriage, and ‘stole’ the Prince of Wales from her friend Thelma, but she sounds as if she was lots of FUN.

Did you find it difficult to balance the two stories that of Rachel in 1997 and Wallis/Mary Kirk from 1911 onwards?
It was very difficult because I stuck to the historical timeline in both cases. Usually in my timeslip novels I have at least one plot that is purely fictional and I can make it wrap around the other, but in this the Rachel and Alex plot follows the timeline of events following Diana’s death while the Wallis and Mary chapters follow their real lives.

Did you know before you began writing how the two stories in the past and present would overlap and connect?
The germ of inspiration for the novel came from the fact that Diana visited Wallis’s old house, the Villa Windsor in Paris, just hours before she died and there are contradictory explanations about why she was there. I wanted to give her a reason for the visit, and to link her story with that of Wallis, because the two women had a lot in common. I made a very detailed plan before I started writing so I knew the links I was going to plant, and where they would be discovered.

Are their any interesting facts or stories you came across whilst researching Another Woman's Husband?
The story about Von Ribbentrop, Hitler’s attaché, sending Wallis regular bouquets of seventeen roses (or carnations) is completely true and it’s quite extraordinary. This was 1935, the Nazis were in power in Germany, and already there were serious misgivings about their treatment of the Jews. Yet Wallis continued to flirt with the Nazis and encouraged the Prince of Wales to do the same. I don’t believe she had an affair with Ribbentrop but she was certainly close to him, and continued to be in touch with him in 1940 once the war had started!

You have set your books at some amazing and interesting times in history - my own personal favourite being the Russian Revolution in The Secret Wife with No Place for a Lady coming a close second. What has been your favourite era to write about and can you give us any hints as to your next book?
I do like Russian history. Despite being on the borders of Europe, the Russian people are very different from us. My next novel, to be published in 2018, has one story set in Russia and it covers the Stalinist years, when neighbours informed on neighbours, children on their parents, and people disappeared overnight in the great purges. I like 20th-century history, and my favourite period is probably the 20s and 30s.

Are there any books you would recommend for those who would like to read more about the subject matter in Another Woman's Husband?
Anne Sebba’s biography of Wallis, That Woman, is a balanced and very readable account. I didn’t find a decent biography of Diana but Martyn Gregory’s account of the events around her death, Diana: The Last Days, seems to me the most convincing.

I know an author loves all his/her books but which of yours would you most recommend for a book club?
The Secret Wife has sold best of all my books so far, but my favourite is the one I’m writing just now. It’s called The Lost Daughter and, while not quite a sequel to The Secret Wife, it has links to it. That’s all I’m saying for now…

Another Woman's Husband has been one of my reading highlights this year. Could you share any of yours with readers of the blog?
Fates and Furies by Lauren Groff: it does ever such a clever thing in the middle but I won’t tell you what. On Golden Hill by Francis Spufford: a brilliant recreation of 18th-century New York, and a gripping edge-of-the-seat story too. Circling the Sun by Paula McLain: I discovered her after reading The Paris Wife last year. This one is about Beryl Markham, an astonishing, gritty character in Africa in the Happy Valley days. Loved it!

For those who may have been inspired by the brilliant storytelling in Another Women's Husband and now wish themselves to put pen to paper, can you give us some helpful writing tips?
The best training for writing is to read a lot, so you develop ‘story sense’ and get an ear for pace, when a scene requires dialogue and when it’s time for a spot of description. The more you write, the better you get (I hope). I don’t know any short cuts because for me it was all about hard graft and trying again when I got rejections. I do loads of research before I start, then write a lengthy chapter-by-chapter outline (usually about 30-35,000 words) in which I have worked out most plot points. I know other writers who just start with the first line and write to see where it goes and I’m envious of their confidence. Last piece of advice: if you have a hankering to write, just do it. It’s one of the most rewarding things in life.

Two women who challenged the Crown.
Divided by time. Bound by a secret...

At the age of fifteen, carefree Mary Kirk and indomitable Wallis Warfield meet at summer camp. Their friendship will survive heartbreaks, separation and the demands of the British Crown until it is shattered by one unforgivable betrayal.

1997
Rachel's romantic break in Paris with her fiancé ends in tragedy when the car ahead crashes. Inside was Princess Diana. Back in Brighton, Rachel is haunted by the accident, and intrigued to learn the princess had visited the last home of Wallis, Duchess of Windsor, only hours before the crash. Soon, the discovery of a long-forgotten link to Wallis Simpson leads Rachel to the truth behind a scandal that shook the world...