The Write Stuff with... Peta Rainford

Today it's my pleasure to hand the blog over to children's author and illustrator Peta Rainford to talk about how she uses words and pictures together in her books.

Probably the best thing that’s happened to me since I published my fifth children’s picture book, The Niggle, on 15 November, was being pursued up the road by a six-year-old on a scooter, who wanted to tell me he’d read the book and loved it! Five star reviews are wonderful in their way, but, for a children’s writer and illustrator like me, they just can’t beat the heart-felt enthusiasm of a six-year-old!

I liked what he said next even more. He told me that his favourite part of the story was ‘the bit at the end, when Joe went diving.’ The reason I liked this comment so much? Well, it’s because, in terms of the text, diving’s hardly mentioned at all. It’s the picture that gives all the detail, and, for the six-year-old, what the picture said, was just as much a part of the narrative as the words. Which, of course, is exactly how a picture book should work.

I remember very clearly the interview Alan Yentob did with the wonderful Judith Kerr for the BBC programme Imagine... a few years ago, in which Kerr said that, as an illustrator, you should never just draw what the text describes. Her point was that, if young children have to work really hard to work out what the words say, they will feel really cheated when they discover they need not have bothered; that they could have just looked at the pictures! I always bear Judith Kerr’s words in mind when I am working on the illustrations for a new book.

I am lucky that I have a background in art as well as writing. I can’t really imagine what it would be like to write the text for a children’s picture book and not produce the illustrations too. For me, illustration and text are both integral parts of the storytelling process. Through my pictures, I have a whole second language to extend my story – or (often) tell a whole lot of parallel stories. I love to introduce characters and scenarios into my pictures that aren’t mentioned in the text – and it’s so exciting when children pick up on them. 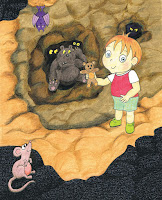 So thank you Harvey (the boy on the scooter). You made my week! 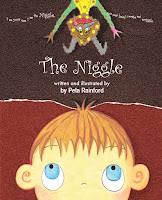 The Niggle tells the story of Joe Jackson, a little boy who has never felt fear. Until the day a miniature monster swims in his ear! The monster is the Niggle, a tiny terror, who whispers worries in Joe’s head and makes him afraid. Will Joe Jackson let the Niggle win? Or will he learn to overcome his fears?

The Niggle, through humour and rhyme, tells children aged between three and eight that it’s OK to feel fear. In fact, you can’t be brave if you don’t.
Link: http://amzn.eu/6YQLFkz

The Niggle is the fifth picture book written and illustrated by Peta Rainford. Her other books are: Hairy Fairy, Isabella Rotten Speller, Isabella's Adventures in Numberland and Jamie and the Joke Factory. Peta started writing and illustrating children's books in 2012, after a 15 year career as a business journalist. She studied English Literature at York University and Fine Art at Central St Martins, though all that was a long, long time ago.

All book titles in bold are Amazon UK Affiliate links which will earn me a few pence if anyone clicks through and makes a purchase - any money earned will go towards buying books or gifts for giveaways.
Posted by Sharon at 09:30