Today it's my pleasure to be chatting to author Isabella May ahead of the publication of her second novel The Cocktail Bar. 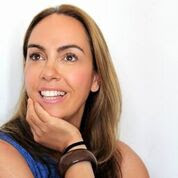 Welcome back to the blog, how's life been for you since the publication of your debut novel Oh! What a Pavlova?
Thank you so much for having me back, Sharon, I really appreciate it! It’s been a busy (but good busy) time since ‘Pavlova’ was published in October. Lots of great feedback on the story and that’s always encouraging for a newbie author. I’ve also just signed the contract for novel number three, Costa del Churros… which I’m finishing up writing this month and next. Exciting times.

Your new book The Cocktail Bar is published next week, can you tell us a little bit about it?
Yes, that’s right. My second novel comes out 13th February, and is the perfect antidote to Valentine’s Day and all its sweet predictability! It’s the story of an ex rock star (River Jackson) who returns to his hometown of Glastonbury to set up a cocktail bar. But the locals are far from impressed. Little do they know, however, he’s brought a bottle of very magical elixir with him for the ride… and soon everybody’s lives will change for the better.

Rock stars and Cocktails sound like a dangerous combo, if you could have a cocktail with any rock star, dead or alive, who would it be & why?  And what would be your cocktail of choice?
River is a bit of a ‘tame’ rocker and he breaks the Bad Boy mould with his golden rule; he’ll only serve up two cocktails per person of an evening. He wants his guests to appreciate the finesse of his tipples, just as they’d savour a night at the opera (his words, not mine!)

So if I had to choose a real rocker of a drinking partner then I’d probably go for Gary Stringer, the lead singer of Reef. We both went to the same high school, having both grown up in Glastonbury, so we’d know lots of people in common, which would be a good ice breaker – I have a tendency to get ridiculously and embarrassingly star-struck!

And the drink would have to be a Frisky Bison. River raves about this cocktail in the novel, which is basically liquid alcohol apple pie. Perfect for the current weather (we actually have snow atop our local Spanish mountain today here on the Costa del Sol!)

If The Cocktail Bar was going to be turned into a movie, who would you cast as the central characters?
Now there’s a thought!

Jake Gyllenhaal would just have to be RIVER - preferably minus the man bun.
Aidan Turner would make the perfect brooding BLAKE.
Damian Lewis looks the part as LEE… just the broad Somerset accent to perfect.
Rosamund Pike would make the quintessential ALICE.
Nobody would pull off GEORGINA better than Kristen Stewart.
HAYLEY could only be played by Miranda Hart.
And Geena Davis has HEATHER written all over her.

What essentials do you need to have close to hand when you are in writing mode?
Coffee, water, cake and a little Facebook for procrastination purposes.

What writers inspire you?
My fellow Crooked Cat authors are all really inspirational. Between us we cover so many genres and one of the true joys of getting published has been taking time out to read novels I might not usually be drawn to. You learn so much that way when it comes to sharpening your own writing. It also helps foster brand new ideas!

If you could go on a writing retreat anywhere in the world, where would you like to go and why?
I think there are few places more idyllic than Tuscany. I have been for the food, but would love to go back for the writing… AND the food!

And finally are you currently working on a new book?
Yes, I’m just putting the finishing touches to Costa del Churros which will be released in September. It’s another foodie, spiritual, travel-based rom-com with a generous dash of flamenco; a tale of four ladies from completely different backgrounds, all in desperate need of jumping out of their comfort zones. It was also a great excuse to sit in local cafes and tapas bars for ‘inspiration’ as it’s based here in Andalucia, where I live.

Rock star, River Jackson, is back in his hometown of Glastonbury to open a cocktail bar… and the locals aren’t impressed.

Seductive Georgina is proving too hot to handle; band mate, Angelic Alice, is messing with his heart and his head; his mum is a hippie-dippy liability; his school friends have resorted to violence – oh, and his band manager, Lennie, AND the media are on his trail.

But River is armed with a magical Mexican elixir which will change the lives of the Three Chosen Ones. Once the Mexican wave of joy takes a hold of the town, he’s glad he didn’t lose his proverbial bottle.

Pity he hasn’t taken better care of the real one…