The Write Stuff with... Zoe Miller

Today it's my pleasure to welcome Zoe Miller back to the blog and to kick off her A House Full of Secrets blog tour. 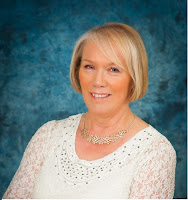 I’d like to say a big thank you to Sharon for hosting me on her wonderful book blog. It’s a pleasure to be featured here. Today is the first post on the blog tour and it’s about divided families, one of the central themes in A House Full of Secrets. I hope you enjoy, Zoë x

Families: they can be united by a shared history, or divided by secrets, eccentricities, or skeletons buried deep in the closet. At the heart of A House Full of Secrets is a divided family at odds with each other.

The Blake family, Alex, Lainey and Niall, grew up in the remote and beautiful county Mayo, an unspoilt landscape rimmed with blue grey mountains, and abundant with gorse covered hills, deep, silent forests and glinting rivers. They enjoyed a happy childhood where they ran free in those forests and mountains, coloured by escapades such as midnight feasts, treasure hunts, swims in a crystal clear lough, and trips to Infinity Hill where they could see for miles and paddle in mountain streams that carried the imprint of their feet down to the sea and across the ocean to America.

What could be more perfect?

Yet after such an idyllic childhood, their lives imploded and brothers Niall and Alex fell out.  Now grown men in their forties, they haven’t seen or spoken to each other for over twenty years. With Niall living in London and Alex in New York, the division in the family has never been resolved.  Lainey has spent those years playing go-between, stuck in the middle of her brothers’ chill, trying to maintain the semblance of a normal family and keeping her brothers up to date by copying both of them on very occasional emails.

Into this long, cold silence, the three siblings receive invitations from their elderly father to come home to Mayo for a family reunion over a long weekend.

Londoner Vikki is invited to accompany Niall to Ireland for the weekend. He’s a good friend whom she longs to become closer to. She has known there were parts of his life that Niall kept securely under wraps, but it’s not until she arrives at his family home, Lynes Glen, that she finds out he’s been estranged from Alex for all those years. Niall refuses to give her any explanation for the rift, it’s a situation that just evolved he tells her, and Vikki is forced to ask herself if there is any possibility of deepening a relationship when there are major issues they can’t discuss.

When the invitation arrives in New York, Alex’s wife, New Yorker Jenna, is shocked at the ease with which he accepts.  In seven years of marriage, Alex has never explained the rift with his brother. Old history, he told her when they first met, and nothing to do with their relationship. It’s a rift that both of them have accommodated into the fabric of their marriage so that it has become part of the tapestry, like a dark threading in one corner that they’ve tacitly chose not to unpick. Even now, as they prepare to come back to Ireland, he refuses to be drawn on what happened between him and Niall, and like ripples in a pond, the division in the Blake family spreads like a contagion into Alex and Jenna’s marriage.

Jenna is on tenterhooks when they arrive in Lynes Glen, everything about the fraught situation filling her with unease. Much to her surprise, when the brothers come face to face that first evening, it’s all very casual and friendly, as though the last twenty years have never happened, and nothing has ever gone wrong.

No wonder both Jenna and Vikki are mystified.

But is it that easy to paper over the cracks or can families heal divisions without giving them an airing?

The Blake siblings ignore a major rift in order to play happy families. They close ranks in their determination to guard their secrets close to the chests to the exclusion of everyone else.  But running through the narrative of A House Full of Secrets is an untold story that simmers below the surface.  As the weekend unfolds and strange incidents happen, Jenna and Vikki come to realise they are all walking on eggshells and something deep and dark lurks behind the perfect charade.

And no matter how much the Blakes try to hide their resentments and cover up old divisions, cooped up for the weekend in their remote childhood home, where the atmosphere is thick with secrets and shadows and memories are shifting and stirring, anything could happen…

All she sees is the perfect man - but what is he hiding?

An invitation to visit Niall's childhood home is too good an opportunity for Vikki to pass up. This is the chance she's been waiting for to get closer to her friend, and to meet the family he's always been so cryptic about.

But when Vikki arrives at the beautiful but remote Lynes Glen on Ireland's west coast, and finally meets Niall's estranged brother Alex and his overbearing sister Lainey, she realises that this reunion will be far from heart-warming.

As Vikki fails to convince any of them that she saw a mysterious woman at the lake - off-limits since a tragic accident - strange and sinister incidents begin to happen at the Blake family home. What secrets are they keeping? And why exactly did Niall ask Vikki to join him for the weekend?
Posted by Sharon at 06:30