Apparently today is Book Lover's Day so even though my When I Find You giveaway only finished yesterday I thought it only fitting to run another one to share the book love, as I've been spoilt by authors and publishers with so many fabulous books, by giving something back to loyal followers of the blog.

So I've decided to totally spoil you by offering you the chance to win this gorgeous Books, Books, Books tote bag plus a paperback book of your choice from Amazon (up to value £8) 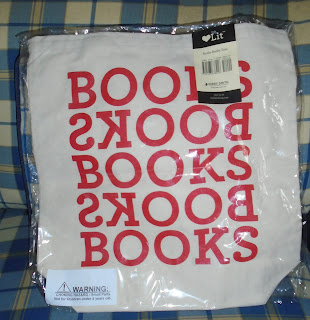 Below are some of the books I have enjoyed reading recently, or am looking forward to reading in the near future, to give you some ideas but I'm sure you've all got a long wishlist of your own of books you want to read. All book titles in bold are Amazon UK Affiliate links which will earn me a few pence if anyone clicks through and makes a purchase - any money earned will go towards buying books or gifts for giveaways.

A Match Made in Devon by Cathy Bramley

Nina has always dreamed of being a star. Unfortunately her agent thinks she’s more girl-next-door than leading lady and her acting career isn't going quite as planned. Then, after a series of very public blunders and to escape a gathering storm of paparazzi, Nina is forced to flee from London.

Her plan is to lay low with a friend in Devon, in beautiful Brightside Cove. But soon Nina learns that more drama can be found in a small village than on a hectic television set.

And when a gorgeous man (and his adorable dog) catch her eye, it’s not long before London and showbiz start to lose their appeal. Will Nina choose to return to the bright lights or has she met her match in Brightside Cove?

Do Not Disturb by Claire Douglas

Could your dream home be your worst nightmare?

After what happened in London, Kirsty needs a fresh start with her family. And running a guesthouse in the Welsh mountains sounds idyllic.

But then their first guest arrives.
Selena is the last person Kirsty wants to see.
It's seventeen years since she tore everything apart.

Why has she chosen now to walk back into Kirsty's life?
Is Selena running from something too?
Or is there an even darker reason for her visit?

Because Kirsty knows that once you invite trouble into your home, it can be murder getting rid of it...

84-year-old Florence has fallen in her flat at Cherry Tree Home for the Elderly. As she waits to be rescued, she considers the charming new resident who looks exactly like a man she once knew – a man who died sixty years ago.

His arrival has stirred distant memories she and Elsie thought they’d laid to rest. Lying prone in the front room, Florence wonders if a terrible secret from her past is about to come to light …

Open Your Eyes by Paula Daly

Jane doesn’t like confrontation. Given the choice, she'd prefer to focus on what’s going well, the good things in life.

But when her husband, Leon, is brutally attacked in the driveway of their home, in front of their two young children, Jane has to face reality. As he lies in a coma, Jane must open her eyes to the problems in her life, and the secrets that have been kept from her, if she’s to find out who hurt her husband – and why.

The Pool House by Tasmina Perry

A Summer To Die For

To Jem Chapman, it's the chance of a lifetime. An invitation to join a group in an exclusive Hamptons house-share, who could say no? But when she discovers what happened last summer, Jem can't help but feel a chill.

A young woman was found drowned in the house's pool. The housemates said Alice was troubled. She'd been drinking. She couldn't swim...

A Secret To Kill For
As Jem gets to know her glamorous new housemates, she realises each has something to hide. What really happened last summer? And who would go to any lengths to keep a person quiet?

The Rest of Me by Katie Marsh

Alex Fox knows there are lots of things she should be.

She should be the perfect wife to her chronically ill husband Sam, and the perfect mother to their two daughters. She should be excelling in her high-stress job. And she should be completing the demanding to-do lists she makes to keep herself on track.

Even if, just sometimes, she doesn't have time to breathe.

When Sam's condition worsens and Alex donates a kidney to save his life, her carefully scheduled existence starts to unravel - eventually forcing her to face up to a past that she has buried for years.

As the family she has fought so hard for threatens to fall apart, can Alex finally confront the mistakes that have shaped her - and rediscover what is most important in life?

*Terms and Conditions – As with all giveaways on the blog the giveaway is open to existing followers, enter via Rafflecopter form below.  The winner will be selected at random via Rafflecopter from all valid entries and will be notified by email and/or Twitter. Any personal data given as part of the competition entry is used for this purpose only and will not be shared with third parties and will be deleted once receipt of the prize has been confirmed.  NB. Please do not add details of this giveaway to other sites without my permission.

a Rafflecopter giveaway
Posted by Sharon at 15:45