There's just over a week to go until the first event starts at this year's Salisbury Literary Festival but I still have a couple more feature posts to share with you.  Today it's my absolute pleasure to welcome C.J. Tudor to the blog to talk about her debut novel The Chalk Man, which I'll be reviewing later, and her event with Stuart Turton. 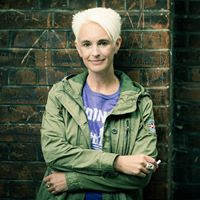 Can you tell us a bit about yourself and your writing journey?
Well, it’s been a long journey! I didn’t knuckle down to try and write properly until my mid-thirties. I suppose, like a lot of people, I thought I would write a book, immediately get an agent and publishing deal. Ten years, many books and rejections later, that’s exactly what happened!

If you had to give an elevator pitch for your debut novel The Chalk Man, what would it be?
IT meets Stranger Things in a small English market town. Chills, twists and creepy chalk drawings.

The cover of The Chalk Man alone conjures up a creepy image of the story that is about to unfold, where did the inspiration come from?
The inspiration came from a box of coloured chalks that a friend bought for my daughter’s second birthday. We spent the afternoon drawing stick figures all over the driveway. Then we went inside and forgot about them. Later that night, I opened the back door and I was confronted by all these weird chalk drawings. In the darkness, they suddenly looked incredibly sinister. I called out to my partner: ‘These chalk men look really creepy in the dark.’

None of us ever agreed on the exact beginning.

Was it when we started drawing the chalk figures, or when they started to appear on their own?

Was it the terrible accident?

Or when they found the first body?

I’m looking forward to your panel at this year’s Salisbury Literary Festival, how did you feel to be invited to be part of the festival?
Thank you. It felt brilliant!! Especially as it’s in my home town where I was born. It’s a massive honour!!

Have you been on a panel at a festival event before?
Yes, I’ve done a few now and they’re always fun. I love talking about my book. After all, for ten years no one wanted to hear about my writing, so I’m making the most of it now!

What are you most looking forward to about your event?
Having a laugh with Stu Turton and listening to him talk because he is very talented and hugely funny. Also, talking about my book in my home town.

What would you most like to be asked about?
Anything really. Maybe where the fictional town of Anderbury is based upon!

C.J Tudor's event with Stuart Turton is at 12.15pm on Saturday 20th October at Salisbury Playhouse, tickets can be purchased here.

What essentials do you need to have close to hand when you are in writing mode?
My Laptop. That’s it. Oh, and a charger.

What novel have you read that you wish you had written?
Pretty much every great book I read. There’s always something where you think, ‘Damn, that was good.’ My all-time favourite books are The Shining by Stephen King and Spares by Michael Marshall Smith. Both inspired me to want to be an author.

Did you treat yourself to something to celebrate the publication of your debut novel?
There’s a small art gallery in Nottingham that I used to walk past every week. I always told myself that one day, when I ‘made it’, I would go in and buy a picture. So that’s what I did. I bought a very cool Mackenzie Thorpe print. I felt a bit like Julia Roberts in Pretty Woman.

And finally what can we expect from your next?
The Taking of Annie Thorne is out in February and you can expect it to be even darker and creepier than The Chalk Man!

‘Joe Thorne grew up in a small mining village in the Midlands. When he was 15 his little sister disappeared. At the time, he thought it was the worst thing in the world that could ever happen.

And then she came back.Twenty-five years later, a brutal murder and a mysterious message bring Joe back to the village of Arnhill. But returning to the place where he grew up means facing the people he grew up with, the things they did and what they found in the old abandoned mine.

Places, like people, have secrets and sometimes you should never come back.’