Today it's my pleasure to welcome author Melanie Blake to the blog as part of The Thunder Girls blog tour to talk about her debut novel which was published last week. 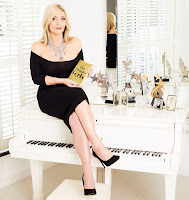 Hi Melanie and welcome to the blog, can you give us a brief introduction to yourself and your writing journey.
My writing journey has been a long time coming because it took 20 years to get my novel The Thunder Girls published. I am an independent woman and a big supporter of female-led stories. I’m also very active in reaching demographics that are often overlooked by mainstream media, such as working class and older women, and I am most interested in mass entertainment, certainly not niche.

If you had to give an elevator pitch for The Thunder Girls, what would it be?
The Thunder Girls is a white-knuckle rollercoaster ride of friendship, betrayal, murder, and revenge. If you only had a chance to read one book this summer, you wouldn’t be disappointed if you chose this.

You've had a very successful and varied career over the years, from working with and managing pop stars, running a talent agency, journalist and playwright; what inspired you to put pen to paper and write The Thunder Girls?
I wrote the first draft of The Thunder Girls originally in 1999, and I got taken on by a major agent. There was a lot of buzz around the project initially until men in power in publishing and broadcasting at that time realized it was a story of women based in their forties and fifties, at which point they declared there was no interest in that demographic. Back in the nineties very few all-female led projects, where the women weren’t young girls, were green lit. I was actually offered a ton of money to change the girls’ ages and even though I was broke and living in a bedsit, I believed in the story and the women that tell it so strongly that I said no. It’s taken 20 years to get The Thunder Girls as it should be, and it was worth the wait.

They say write what you know, is that why you decided to feature the music industry in your novel with the reforming of a girl group after a thirty-year break?
Absolutely, it’s always absolutely best to write what you know because the reader then knows it’s an authentic tale. The book is fiction and the stories are way more outrageous than real life I’ve experienced but it is authentic.

Which character did you have the most fun creating, Chrissie, Roxanne, Carly, or Anita? And which one would you say is most like you?
Chrissie without doubt, she appears to be a stone-cold bitch, of which in my career I’ve had experience of many, however as the reader goes on the journey they discover, much like the music industry, all is not as it seems. For the one that is most like me – I’m not like any of them; if I had to take elements, I’d have Chrissie’s ambition, Carly’s insecurity, Roxanne’s battered love life and Anita’s free spirit.

As well as writing the novel for The Thunder Girls you have also adapted it into a stage production, how different is the writing process for these two different formats?
It’s completely different and, as I hadn’t done it before and as I knew it was for a prestigious high-profile cast and venue, I brought in a fabulous playwright Fiona Looney, whose work I love, to help me adapt it for the stage. The play actually follows a completely different story to the book and is a standalone story.

I was going to ask you about your childhood influences and reading but read in your bio that Jackie Collins was a huge inspiration to you, and that you actually bought some of her jewelry following her death. What do you think she would have thought about The Thunder Girls?
Having read many of Jackie’s books growing up I would like to think that Jackie would have loved The Thunder Girls, all of her stories were based on strong women who came from nowhere and fought their way through whatever obstacles life and love threw their way to make it to the top or succeed in some way or another. The Thunder Girls is a tale of survival, there are broken hearts, broken lives and broken dreams but essentially, it’s a tale of friendships and whether they can survive the ultimate betrayal.

And finally, what can we expect from you next?
Following on the theme of writing about what you know, I’ve had two careers at the top of the entertainment industry, one decade in  music and one decade as an agent to most of the leading soap actresses in the UK so it’s no surprise to reveal that my second novel will be set against the backdrop of a soap opera.

Melanie Blake is an author, playwright, TV critic and a former music manager. She is 40 years old and head agent at Urban Associates.

The Thunder Girls has been adapted for the stage and will have its world premiere preview at The Lowry Theatre in Salford this September.

I had hoped to also be in a position to review The Thunder Girls today alongside this interview but sadly my reading time has been limited recently so I've not had a chance to finish reading the book yet but I will say that I'm loving the drama so far!

Chrissie, Roxanne, Carly and Anita, an eighties pop sensation outselling and out-classing their competition. Until it all comes to an abrupt end and three of their careers are over, and so is their friendship.

Thirty years later, their old record label wants the band back together for a huge money-making concert. But the wounds are deep and some need this gig more than others.

In those decades apart life was far from the dream they were living as members of The Thunder Girls. Breakdowns, bankruptcy, addiction and divorce have been a constant part of their lives. They’ve been to hell and back, and some are still there.

Can the past be laid to rest for a price, or is there more to this reunion than any of them could possibly know? Whilst they all hunger for a taste of success a second time around, someone is plotting their downfall in the deadliest way possible . . .

The Thunder Girls by Melanie Blake is out now, published by Pan Macmillan, priced £7.99 in paperback original.

All Amazon UK book titles in bold/italics are Affiliate links which will earn me a few pence if anyone clicks through and makes a purchase - any money earned will go towards buying books or gifts for giveaways.
Posted by Sharon at 06:30