The Write Stuff with... Jo Jackson

Today it's my pleasure to hand the reins over to author Jo Jackson to talk about her writing journey. 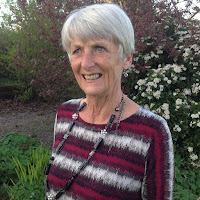 ‘Did you always want to be a writer?’ It’s the question I get asked most frequently when giving talks. I always liked to write, but I never aspired to be a novelist. As I was writing my first book, I told myself I was enjoying the process; anything to come of it would be determined when it was finished. One thing I was clear about was that I would only publish if the book, having been professionally edited and copy edited, was as good as it could be, and I was proud of it.

Probably a more important question would be, ‘Did you have a story to tell?’

Too Loud a Silence became a story I needed to write after I had spent two years living in Egypt with my husband and three young children in the 1980’s. Egypt is a wonderful country and the people kind and generous, but there is great poverty. Babies, usually girls are sometimes found abandoned. I met twin baby girls in an orphanage. They had been left on a rubbish dump. It sounds horrendous but their desperate mother would know in choosing such a place it guaranteed they would be found quickly. The waste mountains are scoured by the locals every day and anything useable, edible or saleable is recycled.

One day a week for nearly two years I took those little girls out of the orphanage. Other ex-patriots did the same with other children. When I collected them, they would be wet and usually hungry. Most of their time was spent in their cots with little stimulation. I would bathe them, feed and play with them. Our own children grew to love them as we did. Then suddenly without warning or explanation the orphanage was closed to all outsiders. This kind of unpredictable happening was not uncommon in Egypt but usually with patience and sometimes a little backsheesh things could be put right. Not this time despite all our attempts. The consequence was we eventually came home never knowing what became of those two little children.

I began to write on my return from Egypt, but children and career intervened. My handwritten manuscript lay unfinished in a drawer. My enthusiasm was not to be reignited until I joined a writing group when I retired. The twins remained my inspiration. After three years of writing, the story became Too Loud a Silence, a book I needed to write for me as well as them. It is fictional because I don’t know how their lives turned out, but we have never forgotten them. Belonging to a writing group doesn’t suit everyone but for me it is invaluable. Without their support and honest feedback my books may never have reached fruition. My second, recent novel, Beyond the Margin took me the same length of time to write and publish. 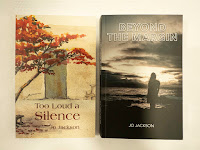 My novels are character driven rather than plot driven. Not so surprising when my whole career has involved working with people. First as a nurse, then a midwife and finally as a systemic family therapist. It has been my privilege to work with people, often when they have been at their most vulnerable. As a therapist I listened to their stories and marvelled at the resourcefulness, stoicism and courage that human beings can display. I am thankful my own life has been less fraught. I hope I have paid tribute to them through my books.

My second novel, Beyond the Margin was based around two characters from separate short stories I had written. Gradually an idea formed and when on holiday in Ireland for a month I began to write. The wild west coast of Ireland seemed the perfect setting for the story.  Interestingly a character who I never intended to be a major player ‘demanded’ that his story be written and that it should be written first. At the editing stage I discarded one of the original characters – it’s hard to let go of twenty thousand words and I felt disloyal! The book is stronger for it.

I don’t plan my novels. I have the germ of an plot, but I let my characters take me where they want to. It still feels a scary strategy, but I have learned to trust them and go with it. It works for me.

Extracts from Amazon reviews for Too Loud a Silence:


‘This is a book that will stay with you. A fluent and beautifully crafted debut novel’.

‘Beautifully written. In a world where political unrest is rife, this story shows the very human side of it all. Amazing first novel’.

Extracts from Amazon reviews for Beyond the Margin:


‘Quite simply this book blew me away. The depth of understanding in the narrative and the emotional charge delivered is awesome.’

‘The story is all the more hard-hitting for its authenticity’.

Readers of Beyond the Margin say they experienced every gamut of emotion, finding it harrowing in part but also uplifting. To know that both have proved to be books people didn’t want to put down, and then didn’t want to let go of fills me with pride.

Will I write another book? I don’t know. I love writing. Will my writing become a third novel? I’ll let the characters decide whether they have a story to tell.