Today it's my pleasure to welcome urban fantasy author J.P. Jackson to the blog. 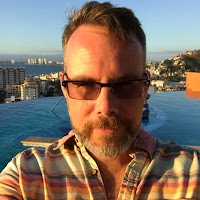 Can you tell us a bit about yourself and how your writing journey started?
That sounds like such an easy question to answer, but I’m struggling! Okay, well here goes. I’m a 50 year old gay guy from the prairie provinces in Canada, married to my husband for 10 years (almost, not quite), but we’ve been together for 23 years. I’m a bear. For those who don’t know what that is, it’s a way for gay men to categorize furry guys like myself, but as with any type of label, if you asked 10 gay men what a bear was, you’d get 10 different answers. So for me that equates to a little overweight, bearded, and furry. Let’s see, what else…pagan, city-slicker, artsy, an African violet grower, world traveller and knitter. Oh, I guess author and reader too! There, I think I covered off the big descriptors.

What got me started on my writing journey? In my early 40’s I sat back, took stock of my life, and realized that a good chunk of it was gone. I evaluated where I’d been, and where I still wanted to go. I ended up with a haphazard bucket list of random items. Things I wanted to achieve, places I wanted to go, and things I wanted to do. The list changes too. Some things have fallen off after a decade or so, they are no longer important. But the one thing that stuck was writing a novel and getting it published.

Why? My husband has a son and seeing as how I’ve been in his life for a very long time, he’s mine now too. But I personally don’t really have a definitive mark left on the world except for two things (by my eyes). The first are some plant hybrids I’ve made (see the African violet thing above), and the second are my stories. I hope one day I end up on the NYT list, but that’s not as important as to why I write, my motivation.

When I was growing up, and let’s face it, that was a long time ago, there were very few, if any stories that had gay men as the main characters in paranormal and urban fantasy books. Side characters? Oh sure. But the central character? Nope. So, write the book you want to read! I wanted to create magical worlds with light and dark elements, morally grey characters, fantastical creatures, and I needed to see men like me being the heroes. Then, after I got my first book published I realized something else when I found out that a lot of my readers weren’t gay men. The rest of the world needs to see that guys like me can be the hero.

If you had to give an elevator pitch for your latest book Magic or Die, what would it?
Magic or Die is about a broken psychic teacher, James Martin. James is forced into returning back to the facility that killed his lover in order to save five young adults with lethal supernatural abilities. The facility uses these magicals as a source of income, but they’ll euthanize them if they can’t get control of their gifts. James has one job. Make them employable, or watch them die.

James Martin is a teacher, a powerful Psychic, and an alcoholic. He used to work for the Center for Magical Research and Development, a facility that houses people who can’t control their supernatural abilities, but left after one of his students was killed, turning to vodka to soothe his emotional pain. The problem is he still has one year left on his contract.

When James is forced to return to the CMRD, he finds himself confronting the demons of his past and attempting to protect his new class from a possible death sentence, because if they don’t pass their final exams, they’ll be euthanized.

James also discovers that his class isn’t bringing in enough sponsors, the agencies and world governments who supply grants and ultimately purchase graduates of the CMRD, and that means no profit for the facility. James and his students face impossible odds—measure up to the facility’s unreachable standards or escape.

Which comes first for you, characters or the plot?
Depends. Sometimes it’s a scene. With Magic or Die, my editor from my publishing house was putting together an anthology of short stories and wanted me to write something that had a Teacher/Student theme. The shorts were intended to be of a compilation of romance type stories, but that wasn’t something I was interested in writing. He continued to suggest scenarios, and then he said, “How about a story about a werewolf in an anger management class?” That got me thinking. And oddly enough, there is a character in Magic or Die that does have a magical wolf form. But my brain got spinning and I ended up with a host of characters, a magic system, and a very anti-hero type of main character. The short story quickly turned into an entire book.

For other projects, sometimes I see a picture of a person and develop an entire story around them. Other times, I’ll see something in a movie that will inspire me.

Something, though, has to ignite that spark of “There’s a story here.”

If you could have a supernatural power, what would you choose and why?
I’ve said it before, and I’ll say it again. The ability to summon and control demons. That sounds utterly horrifying, and it kind of is. For me there’s something intoxicating about being able to dance along the line of good and evil, of playing in the shadows. It’s not entirely dark, nor is it all sunshine and light. It’s a nice variable marbling in shades of charcoal. With having a horde at your disposal, you’d have the ability to play out some of your deepest darkest fantasies, and have minions do your bidding. And hey, not all of my fantasies are gloomy and gruesome. Just maybe a couple. ;o)

I think everyone has that discord within them, the fight between “should I, or shouldn’t I?” It’s the proverbial devil on one shoulder, angel on the other. I don’t think anyone is entirely good, or inherently evil. I think we make choices.

What do you think are the ingredients needed for urban fantasy/paranormal novels?
First and foremost, you have to be in the here and now. The setting has to be our world, everything we know and expect, but then add in the supernatural (and for some of us that might actually still be Our World.) You need to have that added fantastical nature. If it’s a magic system, make sure it’s well developed, has rules, and consequences, and then stick to it. Make me believe your paradigm.

Now, take me on a journey. Are we fighting for a lost love? Or maybe completing an impossible task? Are we going to kill the beast, or save someone’s soul? Doesn’t matter, just craft your world skillfully and make me believe every single word.

World building is huge. It’s the hardest thing in the world to put black and white words down on a screen and turn them into an environment that is steeped in mystery, has dark and nefarious traditions, eerie hallways with peeling wallpaper, and creatures that would just as soon help you, as they might eat you.

What is the first book that you read that made you think 'I would like to write something like that one day'?
I had an answer, then completely changed it. I’ve always been a big reader. When I was in my teens, I read hordes of horror novels. Stephen King, Anne Rice, Clive Barker, those were mainstays. William Peter Blatty’s “The Exorcist” and Jan Anson’s “The Amityville Horror” started it all though. Then I slowly graduated to fantasy, reading Melanie Rawn, Stephen R Donaldson and Piers Anthony. These were lighter, and magical, and swept me off my feet.

I think the Urban Fantasy/Paranormal realm is bleeding together of both these genres for me. Granted, I know there are Urban Fantasy and Paranormal stories out there that aren’t dark or gory, but I sure do appreciate it when they are!

I quite like Patricia Briggs and the Mercy Thompson series, and of course Charlaine Harris with her Sookie Stackhouse books.

I think if I come close to any of these authors, I will have succeeded beyond my wildest dreams.

What would you say is the best thing about writing? And on the flip side, what is the hardest?
The best? When I am steeped and mired in a darkened room, surrounded by ghouls and witches, and the words are flowing and pages are being written, I lose all sense of time. I’m creating my own little world that one day, I’ll invite others to join. That for me is the best part. I generally have an outline I follow, but setting the characters loose onto the page and seeing which dark alleyway they take me down always brings me joy.

The hardest? Letting other people read my words. I write in a fairly specific niche. Not just the LGBT+ fiction part, but the dark and brooding, gory and scary. Those elements aren’t for everyone. At first I thought everyone should read my tales. But after a few not-so-pleasant reviews, I quickly learned that not every story is for everyone. And as much as that’s okay, it still guts me when I hear or see reviews by someone who ‘didn’t get it’, or ‘this wasn’t scary,’ or ‘oh my god, just get to the point already.” Both my books have fantastic ratings on Goodreads and Amazon, even if they don’t have very many ratings. The bottom line is – once I send my books out into the world, the readers will do with them what they want, and I can’t control that.

I hope like hell that everyone loves them, but I know that’s not realistic.

If you could write in a collaboration with another author, who would you like to write with and why?
Throughout my publishing and writing journey I have met so many wonderful and talented writers. Most of the folks I know are from the LGBT+ fiction world. And I do have some favourite authors there!

Of course, there’s also a handful of folks from the NYT Best Seller list I’d love to have lunch with and pick their brains on everything about writing, their processes, planning, habits and what they think they did that took them as far as they have gone.

But if I were able to collaborate with someone? I think it would be a fascinating exercise to work with M/M Romance and Horror author Rick R Reed – I love his writing. He takes his readers into the heads of his characters so we, the reader, understand their motivations. Another author would be Brandon Witt. There is a gentleness and vulnerability in his characters that makes you instantly gravitate and latch on to them.

I’ve been told my world building is pretty tight. So merging that with some of the other skills above would be a monstrously dark read with deep characters that readers will feel profoundly attached to.

That would be fun!

Thanks for having me! I love hearing from readers. You can find me on the following socials: