Today it's my pleasure to welcome author Maggie Christensen back to the blog. 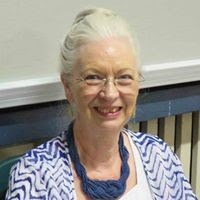 Can you tell us a bit about yourself and how your writing journey started?
After teaching primary school in Scotland for a few years, I got the travel bug and came to Australia lured by images of a bare-chested man in swimmers and a gown and mortar board with the slogan ‘Come Teach in the Sun’. I initially came for two years but when the time was up, I wasn’t ready to return home, and here I am, almost 50 years later! I taught in schools, then achieved my goal to teach in teacher education. It was there I met the gentle giant who is my soulmate.

Throughout my career I was kept busy writing course materials, conference papers and reports. It wasn’t till I was close to retirement that I began to write the fiction I’d always secretly wanted to write. I enrolled in a creative writing course but didn’t finish it as I found the exercises to write short stories didn’t fulfil my writing needs. It was then I began to write my women’s fiction books – fourteen now. But one thing I learned from the course is to write something every day.

If you had to give an elevator pitch for your latest book The Life She Wants, what would it be?
Sparks fly when a straitlaced, inhibited career woman meets an impetuous aging hippie.

Fran Reilly has hidden a secret sorrow for the past thirty years. But turning fifty and losing her mother forces her to re-evaluate her future. Returning to her home in Granite Springs, she’s determined to make changes to her well-ordered life. However there are more changes in store than she could ever have imagined.

When Owen Larsen applies for the position as Head of the new School of Music and Drama at the university in Granite Springs, his only concern is to leave the rat race of Sydney and find a more peaceful existence in the country.

Owen is the exact opposite of everything in Fran’s well-ordered world and reminds her of a past she has been at pains to forget. And Owen’s country idyll isn’t proving to be as peaceful as he imagined.

Can these two opposites find common ground and is there a future for them in Granite Springs?

Your books all feature characters being offered second chances, what inspired you to write stories of this nature?
My characters are all over forty – some fifty or even sixty. I write about mature women because that’s what I enjoy reading. My characters are men and women who have some life experiences – and baggage – and are usually in the throes of a second chance romance. I firmly believe there an audience for books like this – all those women who made Young Adult fiction popular in the sixties and mature women who don’t want to read -as one reviewer put it - about twenty-somethings who just want to get married and have babies. I like to write characters who my readers would like to have as friends.

Can you tell me a bit about your latest series?
This is the first time I’ve set out to write a series, although I already have three which just grew – my Oregon Coast Series, my Sydney Collection, and my Scottish Collection, which I haven’t set up as a box set as yet.

Australian rural fiction is very popular, and I have lived in two small country towns, so I decided to set a series in a small Australian country town – also a departure or me to use a fictional setting. I needed a name for it. The, on a car trip in north Queensland we drove past a property with the name Granite Springs on the gate. I immediately decided that would be the name for my fictional town.

I really loved writing Jo and Col’s story. It’s about two couples who have been friends for most of their lives. A year after Col’s wife Alice dies, he and Jo, who’s been divorced for five years, find comfort in their common grief. But as they tentatively explore their new relationship they have little idea of the challenges that lie ahead or of the reactions of Jos family all of whom have their own agendas.

Unlike my other books, in this one, Jo and Col come together at the beginning, and it's the story of how it all progresses from there.

This has been followed by The Life She Chooses which features Kay, A friend of Jo’s who has been widowed under tragic circumstances and how she finds her second chance, and my newest release The Life She Wants, in which Lyn a strait-laced, inhibited career woman, meets Owen, an aging hippie who acts without thinking. It’s another midlife second chance romance to tug at your heartstrings.

The Life She Deserves was intended to be the first in a trilogy, but I’m now writing book 5 in the series. I’m really enjoying living with the people of Granite Springs while I write. It’s as if they’ve become friends and I don’t want to end the series. I love it when my readers feel that way too as I read in a recent email when a reader in her late seventies wrote “I feel that I have a whole new group of friends”.Comments like this make it all worthwhile.

If any of your books were to be made into a film, which would you choose and why? And who would you cast in the main roles?
The Good Sister. I choose it because it’ my only historical novel and is based on a true story which has been fictionalised. I’d cast Judi Dench as the older Isobel, Emma Thompson as the younger Bel and Gerard Butler as Matt.

What was the first book that you read that made you think 'I would like to write something like that one day'?
It’s authors more than single books. I was inspired by Liz Byrski’s books featuring older women, Marica Willett’s family sagas in which she brings back characters from earlier books as old friends, and Joanna Trollope’s insightful books about family tensions.

What would you say is the best thing about writing? And on the flip side, what is the hardest?
The thing I like most is the way characters gradually take their form as I write them and the way they continually surprise me. I also love when readers contact me to say how much they appreciate reading about older character who seem like real people.

The hardest is the marketing and waiting to read the first review.

If you could give some advice to your younger self about the whole writing/publication process, what would it be?
I’d advise her to start writing fiction earlier, not to allow herself to be distracted by her career.

What novel(s) have you read recently that you wish you had written?
Hidden by Linda Gillard. She writes so beautifully and handles this dual timeframe book in such a clever way.

All book or author links in bold are Amazon UK Affiliate links which will earn me a few pence if anyone clicks through and makes a purchase - any money earned will go towards buying books or gifts for giveaways.
Posted by Sharon at 06:30