Today it's my pleasure to welcome author Mark Romain to talk about his writing and his latest book Unlawfully at Large which is published next week. 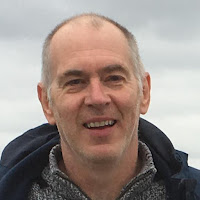 Can you tell us a bit about yourself and how your writing journey started?
Well, Sharon, I’ve always been a voracious reader. As a kid, I would devour books, one after another, and even as I was reading them I would be asking myself what worked for me, what didn’t, and how I would change the bits that didn’t if I could.

My favourite books growing up were the Just William stories by Richmal Crompton, the Edgar Rice Burroughs Tarzan series, the Robert E. Howard Conan adventures, and anything by Alistair MacLean and Agatha Christie – except for the Poirot books, which for some reason I didn’t enjoy.  As I got older, I progressed onto meatier stuff. I couldn’t get enough of writers like Frederick Forsyth, Eric Van Lustbader, John Le Carrie and Len Deighton.

By the time I grew up, I was convinced that I had at least one book in me and I promised myself that, one day, I would get actually around to writing it, even if it was just to tick it off my bucket list. When I retired from the police in 2015, I decided that it was finally time to stop procrastinating and get on with it! That led to me writing my first instalment in the DCI Tyler Thriller series, Jack’s Back. Since then I haven’t looked back.

If you had to give an elevator pitch for your latest book Unlawfully at Large, what would it be?

Claude Winston’s a drug dealing pimp who’s been remanded to prison while awaiting trial for the attempted murder of two police officers. The evidence against him is overwhelming and he knows that he’s looking at spending the rest of his life behind bars so, when an opportunity to escape arises, he seizes it in both hands, leaving a trail of death and destruction in his wake.

DCI Jack Tyler is the man who caught Winston the first time around, and now he has to do it all over again, before the fugitive can be smuggled out of the UK to begin a new life in a country without extradition.

Tyler knows that this won’t be easy; there are very few clues to go on and his team are met by a wall of silence on the streets. Tyler’s not the sort of man to let to take no for an answer or let anyone get in his way, but even he is struggling to make any progress with this case.

Does your previous experience as a police officer come into play when writing crime novels or is it a hindrance with regards to the technicalities?
Yes, my policing experiences influence everything that I write. Having been a real-life homicide detective for over ten years, I know how murder investigations are carried out and what it actually takes to bring a killer to justice, and I make a concerted effort to put this across in my writing.

My books are grittily realistic and, as you’ve probably already guessed, I try to keep them as grounded in the real world as possible. In fact, a lot of the praise I’ve received from readers about Jack’s Back relates to the accuracy of the police procedural elements of the story and how that makes everything else seem so real. Of course, I also like my books to be fast paced, full of action, drama, and gallows humour, and it’s incredibly important to me that the reader never feels that the plot is just treading water in order to pad out the story.

If any of your books were to be made into a film, which would you choose and why? And who would you cast to play DCI Jack Tyler?
I don’t know about turning it into a film, because to condense everything into two and a half hours would mean cutting out so much of the story, but I’d love to see Jack’s Back turned into a serialised TV drama. As to who would play Tyler, that’s a very good question, and one that I don’t know the answer to. It’s funny, because I know exactly who I would like to play some of the other characters. For instance, a young Craig Fairbrass would make a great DI Tony Dillon. Mackenzie Crook from The Office would be an absolutely perfect fit for DC Kevin Murray, and the talented Mark Benton would be spot on for George Copeland. But, as for Jack Tyler, I still haven’t decided on who should play him. I’m open to suggestions from readers!

What was the first book that you read that made you think 'I would like to write something like that one day?'
I’ve thought that About so many brilliant books! The Silence of the Lambs by Thomas Harris, the early Dan Brown novels, The Day of the Jackal by Frederick Forsyth, to name but a few.

I think it would probably be more accurate to say that I have looked at an individual author’s work and wished that I could replicate certain aspects of their style, like the suspense building, the way they finish a chapter on a cliff edge, or the clever use of misdirection and red herrings. I love all that stuff!

If you could give some advice to your younger self about the whole writing/publication process, what would it be?
It’s been a year and a bit since I released my first book, Jack’s Back. The second instalment in the series, Unlawfully At Large, comes out on 31st March, and I’ve also written a novella called The Hunt For Chen which can be downloaded for free on my website. Although I’ve come a long way since I penned those first few words of my debut novel, I still consider myself to be a mere fledgling when it comes to my status and development as a self-published author. 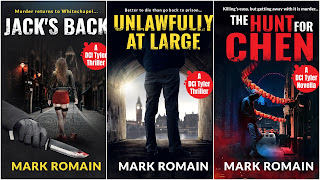 I would say that writing a book is a hard but deeply rewarding process, but it’s only half the battle. For an Indie author like myself, the real struggle is in learning everything else that goes with self-publishing. The brutal truth is that, unless you get your head around how to promote your books and take the time to learn about all the different marketing and advertising strategies, you are unlikely to succeed. My advice to my younger self, or anyone else who is starting out, would be not to rush into releasing your first book. I know that, after the tremendous effort that has gone into writing a book, the temptation to get it out there once it’s finished is almost irresistible. Don’t give in to it. Instead, carry out some diligent research, learn what’s required to become successful, and get everything properly into place before pushing that publish button. I didn’t do that with Jack’s Back, and I really wish that I had.

A friend and fellow author is releasing a four part series later this year but, unlike me, he has gone about it the right way by getting his author platform set up well in advance. He has created a FB Author page and website, he has written his free novella to give away to subscribers, and he has written three of the four books. By the time that he releases the first in series, the last one will be almost finished. That’s how it should be done, but it takes patience, self-discipline, and a lot of forward planning. Me being me, I did everything back to front! As a result, I put myself under a lot of unnecessary pressure, and ended up spending most of the following year playing catch up.
Thankfully, I have learned from my mistakes and everything I need is now in place, but it would have been so much easier for me in the long run if I had done all of this before publishing Jack’s Back.

If you could write in a collaboration with another author, who would you like to write with and why?
There are so many great authors out there whose work I love. If I had to narrow it down, the shortlist would probably consist of Stuart MacBride, Mark Billingham and Peter James, but I rate them all so highly that I would find it impossible to pick one over the others.

And finally, what can we expect from you next?
My second book in the DCI Tyler Thriller series will be released on Amazon on 31st March. I am incredibly excited about that. The third instalment in the series is called Turf War, and that is scheduled for a release in late summer of this year.

All book or author links in bold are Amazon UK Affiliate links which will earn me a few pence if anyone clicks through and makes a purchase - any money earned will go towards buying books or gifts for giveaways.
Posted by Sharon at 09:00