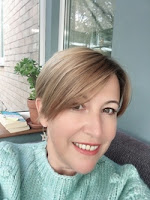 Can you tell us a bit about yourself and how your writing journey started?
I’ve always been a reader. Actually, it’s probably more accurate to say that I’m book-obsessed. From university, I was a high school and college English teacher for ten years before being swept into education management. When times were stressful as a college leader, I’d find myself getting lost in contemporary romance novels as a way to unwind. It wasn’t long after that I started to think up my own stories. Then, before a big birthday, I did it. I resigned and decided to take a new path in life. Nine months later, I published my Freshwater Bay four book series. The first novel in this series is The Strictly Business Proposal.

If you had to give an elevator pitch for your first book The Strictly Business Proposal, what would it be?
Two burned and feisty characters fighting against their fate, which is to fall in love.

Is Beth Barnes a beautiful con artist or the genuine friend of Evan Morgan, an elderly Welsh chef?

When Evan dies, he hands talented London chef Beth her big break. She has the chance to realise her dream and run her very own restaurant in a village on the wild Welsh Celtic coast. But there are strings attached. Can she comply and gain her inheritance, her dream? Accused of being a gold digger by the family, Beth’s welcome to Wales is not quite as warm as she’d hoped for.

Burned from a recent divorce, the last thing on architect Gareth Morgan’s mind is another wedding. If he wants to realise his development dreams, he must marry.

It’s a strictly business proposal. But can Beth and Gareth really stick to the terms?

Which comes first for you, characters or plot?
The characters, although you do need good plot twists to develop their characterisation.

What attracted you to writing a series of books rather than standalone novels?
The book series follows four Morgan brothers from West Wales. In the beginning it was just an idea, but as the writing progressed they took on their own identities and I couldn’t stop. I had to tell each of their stories. They’re all very different characters and each story is a stand-alone novel. As I began writing, what began to fascinate me was the matriarch in the series, the boys’ mother, Ellen. When she meddles in their lives she makes things worse, but her heart is always in the right place and she always wants the best for them. With two adult daughters, something about her trying to forge a new kind of relationship with her grown up children really connected with me.

Is Freshwater Bay based on a real location?
Yes and no. Freshwater Bay is a beautiful beach in Pembrokeshire that you might recognise from Harry Potter’s Deathly Hallows. The whole of the Pembrokeshire coast is connected by a coastal path, where you can walk along the cliffs and down to the beaches and coves. Although Freshwater Bay village is fictional, it is true to say that when I conjured it in my mind, I was thinking of places like Solva, Parrog and Porthgain.

What was the first book that you read that made you think 'I would like to write something like that one day'?
Wuthering Heights is my favourite novel of all time, and I never get tired of it. If you think about it, Wuthering Heights is a very domestic novel. It’s about two families in two very different households. And it’s the way that these isolated strong characters spar and spark with each other that makes it such a wonderful piece of writing.

If you could give some advice to your younger self about the whole writing/publication process, what would it be?
If I had to give myself some advice, I’d tell myself to go for it. It sounds silly, but as a young English graduate I felt that my work could never possibly measure up. Of course, I was setting myself impossibly high expectations and the real question I should have been asking myself was whether people would enjoy reading my stories.

Since publishing the Freshwater Bay series, I’ve been blown away by the wonderful comments I’ve had from readers saying how much they’ve enjoyed them. I had absolutely no idea how strongly readers would identify with the characters, the social issues and the mental health themes in my books. They’ve given me the courage and the confidence to keep on writing.

If you could write in a collaboration with another author, who would  you like to write with and why?
I’d like to work with a professional script writer and try to turn my novels into films or television. The scenes are very visual and I would love to see them come to life on screen.

All book or author links in bold are Amazon UK Affiliate links which will earn me a few pence if anyone clicks through and makes a purchase - any money earned will go towards buying books or gifts for giveaways.
Posted by Sharon at 06:15