One of the things I'm enjoying during these strange times we're currently living in is discovering new authors that hadn't hit my radar before, today it's my pleasure to welcome one such author Dave Holwill to the blog. 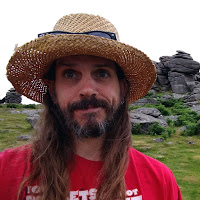 Can you tell us a bit about yourself and how your writing journey started?
Hi, yes, I’m Dave, and I live in Devon on the edge of Dartmoor. My 1st year English teacher, Mr Beavis, once told me I had ‘a real gift for creative writing’. Only the once mind; and my A level History teacher, Mrs Fursman, told me I had an ‘ear for the felicitous phrase’ before reminding me I shouldn’t be cramming my coursework full of gags. This led me to spend the ‘90s abandoning half-written novels as the process of handwriting, editing and then typing up on a typewriter I borrowed from my sister proved to be too much work for a lazy teenager who preferred playing guitar in a punk band.

Then in the ‘00s I got a computer and found out I could abandon just as many half-finished novels with unlimited editing capability before real life, marriage and trying to earn enough to keep a roof over mine and my family’s heads got in the way of writing as music proved to be the more profitable side hustle.

Eventually, after showing my wife a hastily scrawled first chapter of the fledgling Weekend Rockstars, I decided to sit down and force myself to finish writing a book before I turned 40. It worked, as I published Weekend Rockstars a good year before that (full disclosure, I was 34 when I set myself the goal, so it wasn’t exactly a sprint) and I’ve published one book a year since then: The Craft Room, Gap Years and now The Ballad of Fat Labrador.

If you had to give an elevator pitch for your latest book Weekend Rockstars 2: The Ballad of Fat Labrador, what would it be?
A retired musician is dragged back into playing by his recently bereaved best friend and heartbroken teenage daughter. Together, in a band that feels more like an emotional support group, they embark on an ill-conceived tour that stretches their relationships to breaking point.
Dealing with LGBTQIA themes and with a diverse cast of characters: it’s about grief, it’s about  friendship, it’s about coming of age (no matter what that age is) and coming to terms with your own desires. But, most importantly, it’s filled with absolutely killer one-liners.

Had you always planned to write a follow up to your debut novel Weekend Rockstars or is this something that just crept up on you?
It definitely crept up on me. When I finished Weekend Rockstars I was certain the story was over. George was finished with the band and I was finished with George. But I liked the characters, and readers kept telling me how much they liked Tim. I liked Tim and wanted to do more with him. Then I realised Tim needed to start a band. As far as I knew he couldn’t sing, but I didn’t think that would be the kind of thing to stop him.

I was right, and a plot outline started to formulate, alongside another story I had been toying with where George was managing one of his kid’s bands ten years later. Then it occurred to me that Tim would definitely drag George along with him, and grab the nearest backing band he could. George’s daughter Alice’s band was already coming together in my head and so Fat Labrador were born, and Tim hijacking them into being his Timmytones formed the basis of the story.

Sadly I had to come up with a reason for Tim wanting to do this, and for the terrible consequences of his actions. Once I’d realised what I had to do it was a difficult first chapter to write. I did it, it happened, and I am sorry to anybody emotionally invested in those characters for what I have done.

Which comes first for you, characters or the plot?
Always characters: if you were to get your hands on any of those unfinished novels I mentioned earlier, you’d find three or four chapters of characterisation and intrigue with absolutely no idea where it was going. It took finally giving in to the old ‘write what you know’ advice for me to finish Weekend Rockstars using my experiences of playing in bands over the years.

I’ve tried plotting before getting to know the characters and it doesn’t work for me. The characters always want to do something different, and it’s always better than my original idea. Writers have this eternal war between plotters (those who work out the plot meticulously before putting a word on the page) and pantsers (those who just start writing and see where it takes them – by the seat of their pants). In reality we’re all somewhere in the middle, and I have realised that my half-length, very fast and terrible first drafts are me plotting. I generally have a beginning, and an end in mind but they’re never the beginning and end of the final book. Because by the time I’ve spent all that time with the characters I realise that that wasn’t what they would do.

So yes, characters first – and they shape the plot as I write them.

I’m a stealth plotter (I just realised this last week).

If any of your books were to be made into a film, which would you choose and why? And who would you cast in the main roles?
I’ve always thought my second novel, The Craft Room, would make a good three part mini-series. It’s got the feeling of a dark, funny Midsomer Murders to it, so would fit nicely in the Sunday night 9pm slot – where the gory/sexy bits wouldn’t cause too much offence. It’s a black comedy about a grandmother who accidentally goes on a murderous rampage ending up in a First Blood style stakeout in the woods; kind of a pensioner Hunger Games. In an ideal world I would like to see Helen Mirren as Sylvia and Rory Kinnear as her long suffering son, Robert.

On the other hand, I’d love to see the Weekend Rockstars books filmed with Toby Jones and Aiden Gillen as George and Tim.

What was the first book that you read that made you think 'I would like to write something like that one day'?
It’s difficult to say, I don’t remember a single significant moment. It could have been Noddy and the Bunkey when I was about three, I loved that – the outsider nature of the Bunkey and Noddy’s default position of trusting everyone. Noddy’s unshakeable kindness and willingness to admit when he’s wrong is something that keeps coming back to me the older I get.

It might have been one of the hundreds of comics I read – Buster, Whizzer and Chips, The Beano, Oink, MASK, Justice League of America, Spiderman, Spawn. Never let anybody tell your kids that comics aren’t ‘proper’ reading.

It may have been the huge chunks of Stephen King I devoured in my teens – certainly my first abandoned novel from when I was seventeen looks a lot like a Stephen King horror (as does one of my current works in progress).

It could have been Douglas Adams’ Hitchhiker’s guide series, or Terry Pratchett’s Discworld. A lot of my early attempts were very derivative of Pratchett and Robert Rankin, so it could easily be that Soul Music and Armageddon: The Musical were the reason I thought I might be able to write a book. Weekend Rockstars, on the other hand, drew everything it had from Nick Hornby, David Nicholls and Matt Dunn and only really came together when I realised it should have been a Richard Curtis movie.
To try and give a straight answer, I don’t know. It might have been The Lord of the Rings or Ursula LeGuin’s Earthsea books, which I was obsessed with for years (like a lot of awkward boys in the ‘90s) but I’ve never attempted epic fantasy, however much I would dearly love to. I don’t think I have the patience to build a whole universe from the language up.

If you could give some advice to your younger self about the whole writing/publication process, what would it be?
The writing is a lot easier than you think it is. Write a terrible book and fix it in the edits. When I was younger I spent ages making those first chapters better and better without giving enough thought to where the rest of the book was going and they got abandoned through frustration. The same very nearly happened to Weekend Rockstars before I decided to stop worrying about fixing continuity errors and ploughed through to an unknown ending.

Publication is harder than you think, be ready for endless rejection and stop with the false modesty, if you don’t think you’re good then why should anybody else?

Or, don’t bother, you can have more free time and be happier binge-watching Netflix if you’re not constantly trying to find time to write. That’s good advice.

If you could write in a collaboration with another author, who would you like to write with and why?
Honestly, the thing I like best about writing, as opposed to playing in a rock and roll band, is that I don’t have to even pretend it’s a democracy. All decisions are mine and mine alone. I don’t play well with others creatively (editors excepted). Having said that, obviously it would be wonderful to collaborate with one of the greats, Neil Gaiman or David Nicholls, say, but I’m not sure what we would bring to each other’s work.

A genre-crossing collaboration, however, would be great fun. Writing a Rom-Com with Folk Horror genius James Brogden providing scares or, conversely, having Rom-Com queen Nicola May adding much needed jokes and romance to a horror would make for something entertainingly mad.

And finally, what can we expect from you next?
I’ve got a few things on the go at the moment, but I can’t say which I’ll put out first. The Folk Horror book I’ve been piecing together for the last few years is very nearly finished, but there’s every chance I’ll come across another bit of Dartmoor folklore I want to weave in that will put it back further. I’m also working on another Rom-com about a very straight, very white, very masculine man who gets abandoned by his girlfriend at an LGBTQIA Pride festival and has to confront his prejudices to get her back. It’s a lot funnier and less preachy than it sounds.

All book titles and author names in bold are Amazon UK Affiliate links which will earn me a few pence if anyone clicks through and makes a purchase - any money earned will go towards buying books or gifts for giveaways.
Posted by Sharon at 12:30