Now more than ever we need to escape into the world of books so today it's my pleasure to welcome author Vivien Brown to the blog to tell us about her latest book No Sister of Mine which is published in paperback format today. 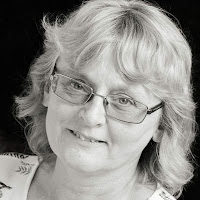 Can you tell us a bit about yourself and how your writing journey started?
I started out working with numbers, first in banking and then accountancy, but my heart always belonged to words! After having twins and taking a few years out from office life, I found my dream day job, working with very young children and their families in libraries and children’s centres, reading them stories, giving out free book packs and organising book-related events. But all the time I was writing as well. – articles and picture book reviews for nursery and parenting magazines, a regular column in Writers Forum, some poetry and lots of fiction You can still find a few funny kids’ poems in old school anthologies written by my alter-ego, Rosie Kent!

My first real commercial success came with short stories, mostly with romantic or family themes, and I have now had around 150 of them published in women’s magazines. I then won the annual Mail on Sunday competition for the best opening to a novel, and even though that particular novel never made it into print, I soon got hooked on writing longer fiction. For a long time I wrote as Vivien Hampshire, and all my earlier work (including two ebook novels, a My Weekly pocket novel and a book about how to solve crosswords) is still out there under that name. When I remarried around five years ago and gave up the day job to write full-time, I decided to ‘re-brand’ myself with a new name and a new genre and became Vivien Brown, writer of ‘domestic drama’ novels.

If you had to give an elevator pitch for your latest book No Sister of Mine, what would it be?
Eve and Sarah. Teenaged sisters, once close, tear their family apart over their love for the same man, and there can only be one winner. When tragedy strikes many years later, they are forced back into each other’s lives. Neither can forget what happened in the past, but Eve now has a successful career, and Sarah has a child. With secrets from the past finally out in the open and bigger problems looming over them here and now, could it finally be time to forgive?

Two sisters, both emerging into womanhood … But they couldn’t be more different.

While Eve is the mature and sensible one, Sarah is headstrong and desperate for a taste of real life.

When Eve brings a new face home for the holidays, Sarah does something that will change both of their lives forever. Something that Eve can never forget – or forgive.

But life won’t keep them apart forever and decades later, one of them will have to choose whether to put the past behind her, or to hold on to hate forever…

Where did the inspiration come from to write about the rivalry between sisters?
I come from a family packed with sisters. Nobody ever seems to have boys! My mum was one of two sisters, so was I, then I had two daughters of my own, and now two granddaughters. The only life I know revolves around girls growing up together. Sharing bedrooms, hand-me-down clothes, fighting over toys, whispered secrets, petty rows and jealousies, being best friends one minute and sworn enemies the next! It wasn’t hard to take things a step further in the book, especially as Eve and Sarah are essentially so different. One is clever and hard-working with a dream to go to uni and become a teacher, while the other is frivolous and less gifted, eager to leave school as soon as possible and only really interested in parties and chasing after boys. Their first sexual encounters as teenagers are so very different, with long-lasting consequences, and lead them off in completely opposite directions.

If any of your books were to be made into a film, which would you choose and why? And who would you cast in the main roles?
My two most recent books, Five Unforgivable Things and No Sister of Mine, each take place over a period of many years, which would make casting quite a tricky problem, as so many of the important characters would have to grow from children/teenagers to middle age, or from young adults to parents and even grandparents – so I would choose Lily Alone, my first novel as Vivien Brown. The action takes place over just a week, and there is a good mix of characters, an adorable toddler in danger, lots of drama and a couple of romances going on, all of which would make good viewing. There’s a trendy vicar on a motorbike, who I wrote about long before one popped up on TV in Grantchester, and the story is partly set in a hospital, which would draw in the Casualty fans. The three main female leads would have to be Emily Watson (Hermione from the Harry Potter films) as Ruby, Amanda Redman as the 60 year old Geraldine, and Dame Judi Dench as my lonely old lady Agnes. My own two-year old granddaughter Olivia could play Lily!

What was the first book that you read that made you think 'I would like to write something like that one day'?
I always loved anything by Maeve Binchy. I have read all her novels and am so sorry she is no longer with us to write more. She creates whole casts of interlinked characters, each with their own stories to tell, and there’s lots of emotion and usually a happy ending. That’s what I aim for too.

What would you say is the best thing about writing? And on the flip side, what is the hardest?
Creating imaginary people and giving them lives and loves, problems to solve… it’s impossible not to start believing they’re real and worrying about them after a while. Working alone suits me too, I don’t have to get the bus to work, fret over traffic, answer to a boss, attend team meetings, or beg for days off! I love the friendship and support of other writers, with advice and congratulations and sometimes commiserations always there when needed. Is there a flip side? Well, the pay’s not always so good, and can be highly erratic, but if you love something enough it’s possible to overlook that.

If you could give some advice to your younger self about the whole writing/publication process, what would it be?
Believe in yourself and go for it! I regarded writing as just a hobby for much too long, while working at ‘proper’ jobs I didn’t always love. Now I see young novelists taking it seriously, learning their craft, taking courses, treating fiction as a real career, and being published, while still in their twenties. I wish I had done that.

If you could write in a collaboration with another author, who would you like to write with and why?
I don’t think I could. I like to have control! My characters live in my head, I decide what they are going to do, and I can’t share them. It’s hard enough changing things in my stories to please an editor, let alone to fit in with the ideas of a fellow author. I do admire those who have done it well though – Janet Gover and Alison May come to mind (writing together as Juliet Bell), with their reworkings of Bronte classics. It’s so seamlessly written, it’s impossible to tell where the joins are or who wrote which bits. I think the only way I could ever contemplate it would be for a romance, on an alternate chapter by chapter basis, sharing the writing with a man. He could do the male point of view parts, and I’d take the female. Just so long as I got to decide the ending!

What novel(s) have you read recently that you wish you had written?
I absolutely loved The Swap by Fiona Mitchell, which has a real dilemma at its core. Two babies are switched accidentally at an IVF clinic, but the error is only discovered three years later. Would you swap back to get the baby that’s biologically yours, or keep the one you had raised? So emotional! And it’s a theme close to my heart, having had IVF myself and looked at it from a different (multiple births) angle in my second novel Five Unforgivable Things. I have really enjoyed lots of World War Two fiction lately too, but to write that myself I would have to do so much historical research, which just isn’t me! I stick to contemporary stories from a world I know and recognise and understand. Writing’s hard enough without adding all that extra work, so I will stick to what I do best – writing about all the drama and emotions that come from messed-up families and complicated relationships.

And finally, what can we expect from you next?
The next novel is written and due out later this year, although it is still awaiting a title and a cover. It’s about two women with things they need to escape from, who swap homes for a month, with one of them unwittingly walking into danger. And it’s at an early stage, but I’m writing about adoption next, and all the trouble stirred up in two families when a woman adopted fifty years ago goes in search of her birth mother. Why has she left it so long, and will she be welcome? You’ll just have to wait and see.

All book links in bold are Amazon UK Affiliate links which will earn me a few pence if anyone clicks through and makes a purchase - any money earned will go towards buying books or gifts for giveaways.
Posted by Sharon at 06:00