Extract from How to Marry Your Husband by Jacqueline Rohen

Today it's my pleasure to be kicking off the blog tour for Jacqueline Rohen's debut novel How to Marry Your Husband, eBook out next week with paperback to follow in July.

He broke her heart. Now it’s her turn.

Rachel has just seen her husband David kissing another woman and she knows her marriage is over.

To make matters worse, she has just discovered that her romantic destination wedding wasn’t exactly legal.

No marriage means no divorce. Heartbroken and angry, she and her friend hatch a foolproof plan:

Step one - Make David fall back in love with her.
Step two - Marry him
Step three - Divorce him and break his heart.

Rachel just has to be careful that she doesn't get swept up in the romance and end up falling in love with him...


Sadly I wasn't in a position to review this book for the blog tour but I still wanted to celebrate its publication so instead I have an extract to share with you to whet your appetite.


It started with a kiss.

Rachel spotted her husband on the High Street. Such a lovely surprise. With a flutter of excitement, she wondered if she’d caught David picking up an anniversary present for her. She looked for a parking space where she could pull over. They could start their celebrations early; she had bought an expensive silk chemise especially for the occasion. There was one night left free for the two of them to celebrate together, followed by a weekend of festivities. The opportunity to see friends and family en masse was sacrosanct; everything was prepared.

When David kissed the woman standing in front of him, Rachel almost crashed her car. She stomped on the brakes and the Chelsea tractor behind responded with an angry blast of the horn. Uncharacteristically, she considered replying with an obscene hand gesture to convey: Hello? Give me a pissing break. I’ve just this moment discovered that my husband is a cheating bastard. Instead, she threw up her hand to apologise and pulled over in a bay marked DELIVERIES ONLY. She tasted bile in the back of her throat. When he’d said not one hour before that he had errands to run, Rachel had stupidly assumed that meant buying a last-minute gift for her. He’d omitted any mention of this flame-haired beauty on his to-do list.

It definitely sounds like Rachel has ample cause to exact revenge so I can't wait to finally read How to Marry Your Husband to see if justice is served to David!

Check out the other bloggers on the tour below to read reviews as well as other features. 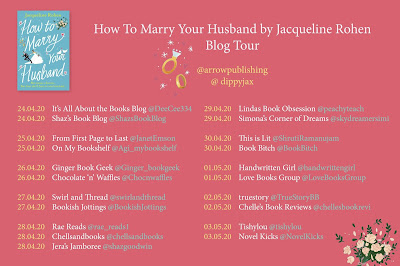