The Write Stuff with... Sue Moorcroft

Today it's my pleasure to hand the reins of the blog to author Sue Moorcorft to talk about writing in Malta, the setting of her latest book Summer on a Sunny Island.

My relationship with Malta is deep.

I lived on that small, rocky Mediterranean island for several years as an army kid and Malta was home. We returned to the UK when I was eight-and-a-half - a strange, cold country called England with sadistic teachers who sent you outside in sleet, snow, ice and fog.The main entertainment in our new barracks in north London was a slide and a few swings.

In Malta we’d had snorkelling, swimming, sunshine … and a whole lot more freedom. Prickly pear lined the dusty roads, colourful fishing boats contrasted with grey naval vessels in the creeks and the buildings were made of golden stone. We were the ethic minority and nobody ever tried to teach us the language but still, decades later, part of my heart is on the island.

The characters in Summer on a Sunny Island do something I’d dearly love to do myself - they spend the summer in Malta. Zach’s grandmother is Maltese and he’s helping her out by looking after a property for her at the same time as escaping a bit of bother he’s got himself into. Dory’s found success in middle age as a food writer and is writing her latest cook book in one of the apartments that Zach’s grandmother owns. Rosa, Dory’s daughter, is spending the summer as Dory’s PA and kitchen porter. Each of the characters stands at one of life’s crossroads.

I had a lot of fun with Dory and gently sent myself up by making her an army kid who has never fallen out of love with Malta and bores everyone rigid when she talks about it. She’s glorying in her months in Malta and can’t understand why Rosa finds it all so foreign and hot. (It doesn’t take long for Rosa to fall in love with it too though.)

It’s a very different Malta I visit now. Much of it is built up and busy. Cars clog the roads - though the prickly pears are still there - and hotels and apartments have replaced many of the golden stone buildings. One of the barracks where I lived and later went to school has been all but obliterated by apartments and a shopping centre. Another, smaller, barracks is where the planning authority is based. Yet, still, at its heart, it’s Malta.

You won’t be surprised to hear that when I was writing Summer on a Sunny Island I returned there. In fact, I went four times in 2019: once with a friend to decide on locations; once on my own to write a big chunk of the first draft; once on my annual holiday with my husband; and once with my brother, who helps me with research, in case I’d left any loose ends. I hope none of my travel companions minds me saying that my favourite of all those wonderful visits was the one on my own, to write. It felt amazing to write on my balcony in the sunshine while boats bobbed in Sliema Creek and traffic rumbled between the palm trees alongside. Then I’d pack up my laptop and a bottle of water and wander off to a place I was writing about that day, find a suitable café, eat lunch and work for another couple of hours. Then I’d amble on to take photos or check out details. It was brilliant! The steps of St Rita Street, when I was a child a quiet short cut between Robb Lido in St George’s Bay and the buses in Spinola, is now nightclub-land. Wall-to-wall bars and clubs are filled with wall-to-wall tourists and locals. I sat with my beer and my laptop at the top of the steps, working out exactly which was Zach’s favourite bar (I renamed it) and where Beppe and his unsavoury buddies would hang out, and how Zach would race through the hotel to get away from them when he’d pushed his luck. Rosa would dance on the steps here and blow off a persistent tourist there. 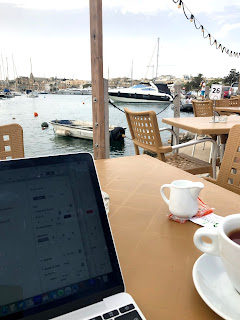 In the evenings I’d find somewhere to walk, somewhere to eat, leaving behind my laptop in favour of my Kindle and a few hours off. I even came across a guy whose dad had taught at my school in Malta. Our tours only overlapped by a few months but I was able to visit him in the UK and see his collection of Malta memorabilia too. Like me, he visits frequently.

There is honestly nothing quite like being in the setting I’m writing about. I’m pretty sure I could have stayed for the entire summer … and a Maltese summer lasts a long time.

This summer, sparks are flying on the island of Malta…

When Rosa Hammond splits up from her partner Marcus, her Mum Dory suggests a summer in Malta. Not one to sit back and watch her daughter be unhappy, Dory introduces Rosa to Zach, in the hope that romance will bloom under the summer sun. But Rosa’s determined not to be swayed by a handsome man – she’s in Malta to work, after all.

Zach, meanwhile, is a magnet for trouble and is dealing with a fair few problems of his own. Neither Rosa or Zach are ready for love – but does fate have other ideas? And after a summer in paradise, will Rosa ever want to leave?

Sue Moorcroft is a Sunday Times and international bestselling author and has reached the coveted #1 spot on Amazon Kindle. She’s won the Goldsboro Books Contemporary Romantic Novel Award, Readers’ Best Romantic Novel award and the Katie Fforde Bursary. Sue’s novels of love and life are currently released by publishing giant HarperCollins in the UK, US and Canada and by an array of publishers in other countries.

Her short stories, serials, columns, writing ‘how to’ and courses have appeared around the world.

Born into an army family in Germany, Sue spent much of her childhood in Cyprus and Malta but settled in Northamptonshire at the age of ten. An avid reader, she also loves Formula 1, travel, time spent with friends, dance exercise and yoga.
Posted by Sharon at 06:00