The Write Stuff with... Eden Gruger

Today it's my pleasure to hand the reins of the blog over to author Eden Gruger to talk about how lockdown affected the release of her second book, Laughing at Myself, and the many lessons she learnt over the last few months.

One of the things that I love the most about being a self-published author is being able to make all the decisions myself! choosing what to write and when, coming up with my own covers (with the help of my focus group). Putting together my own marketing strategy, depending on how much energy I have each month; being able to buy in help from who I want to work with. Putting my own deadlines in the calendar, and generally having the final say about everything. That all went really well for my first book which was released in August 2018. But this is the story of my second book, which happened to coincide slap bang with a global pandemic.

So a little bit of background on book two, right from the beginning it seemed to take much longer to put together, not least because when I was supposed to be on full concentration mode Mr Himself decided to get a puppy, and he (the puppy, although this could also apply to Mr Himself) took up a massive amount of time and virtually all my energy. During the writing to remind everyone that there really was a second book coming I ran a poll on my social media and website to choose the new cover, and the sunglasses wearing pineapple was a hit. By and by I did manage to get the first full drafts to my editor, and thought that all I had to then was work harder to hit the deadline, right? Well no. The next hurdle was that for whatever reason the edits that the lovely Ruth (my editor) made didn’t seem to save on the document, and when it was emailed back to me it was exactly the same as when I sent it. Ruth could see her edits, and talk me through them, but we didn’t manage to get the technology together. I don’t need to tell you the stress and frustration that caused, I am sure my neighbours thought I’d taken in an Anglo-Saxon lodger so ‘traditional’ was my language. 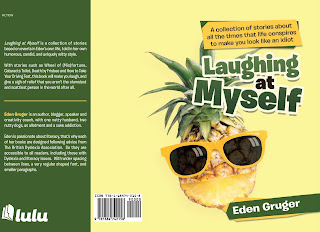 By the time February came around everything seemed to be back on track, and then my mum died. Yep, after an illness lasting three and a half days she was gone. While I was helping organise her funeral, the publisher was doing their libel checks, formatting and everything else that they do on their side. Being the person I am the official launch event had been all planned for several weeks by now, the venue, entertainment and helpers were all booked, the advertising and invitations had gone out, and the press releases were about to be sent. After much discussion with Mr Himself and my dad it was decided the launch should go ahead, and I just hoped that I would be able to cope. However, a couple of days later I received an email from the publisher to say that although they could produce the book in time, due to Covid-19 issues they couldn’t guarantee delivery; meaning the book launch might be without the book. Now, I can carry off a lot of things, but I wasn’t sure that even I could manage that one “Hi everyone welcome to the launch of Laughing at Myself, thanks for coming, you can’t actually see or buy the book tonight, but enjoy yourself anyway…”.

As the days crept past people were getting ill everywhere, and concern about meeting up in groups was growing. A week before the event it seemed that the only sensible thing to do was to cancel, and that week was spent trying to contact everyone who had an invite to make sure people didn’t travel unnecessarily to find that we weren’t even there. On the day before what would have been my book launch the UK went into official lockdown.

During the following days contact between myself and my publisher slowed down, and most of it had to be done by email, with the level of sickness they were experiencing. By May the publisher felt that because of the delay a cover update would be a good idea, but again it all had to be done via email as they were down to a skeleton staff. When the changes came through, I needed to run them past the focus group made up of my ideal readers, which also happened by email.

During the course of producing my second book I had family distractions, technology issues, my mum died, there was a global pandemic, and a cover change, which all meant we eventually released nineteen weeks later than I was expecting.

There are so many elements of self-publishing that are under the authors control that when you reach a point that someone else (or the universe) has a say it can feel more than a bit overwhelming. What I’m taking forward from all this - the most important thing in the whole author process is to write, and that is really the only bit that I have real control over. After that everything else that comes will happen in it’s own sweet time.

For more about Eden and her books check out the links below: