Today it's my pleasure to hand the reins of the blog over to author Jennifer C. Wilson, welcome Jennifer. 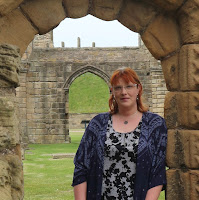 Hi Sharon, and thanks for hosting me on your blog today, to talk about my experiences of writing in Lockdown. It’s definitely been an up-and-down experience for me.

At work (I’m an environmental consultant), we were told on 17th March that we should take whatever we needed away with us that day, and expect to be working from home for the foreseeable future. Heading home, laden down with screen, keyboard and mouse, we had no clue how long this going to go on for. I’m still working at home, with no sign of that changing.

My first thought, with no commuting, and an empty diary, was that I’d get plenty of writing done. Nope. Not one word for almost a fortnight. Then, I was told I needed to take some time off. With five days to play with, and nowhere to go, I decided to try harder, working on a short story collection which technically had an end-of-March deadline, extended into April. Miraculously, everything clicked!

I don’t work well without structure, so I suspect those first couple of weeks were never going to be productive for me, but completing and submitting Kindred Spirits: Ephemera gave me that structure, especially when the editing process began. I still wasn’t writing anything new though – most of the Ephemera stories had been started to an extent before Lockdown, so this was working in a structure that was already there, and finishing off ideas.

With collection happily accepted by Darkstroke, I knew I had the editing process ahead of me. I rarely write anything new whilst I’m mid-edit, as my brain cannot seem to do two things at once, but during Lockdown, that suited me just fine. I still felt I was making baby steps, almost tricking my brain into thinking everything was normal. After all, I had a launch to plan now, and marketing, and a whole new project to be excited about.

Late April, with edits nearing completion, an idea struck. A new, exciting, shiny idea, which appeared out of nowhere, unannounced, unexpected, and massively welcome. One scene made it to the page, then a second. Tentatively, the whole story began to emerge, bullet-point after bullet-point, until somehow, there was a synopsis. I like to plan my stories out these days, so I can jump into writing whenever I’m able to grab some time.  I used to be more of a pantser, but as work got busier, it wasn’t an option anymore.

And so The Warriors’ Prize came into being. It’s currently sitting at 15k, and I’m really enjoying chipping away at it.

That wasn’t all though. Throughout 2019, I ran a series of workshops, full of writing prompts, exercises and feedback, and I still had all the material sat there on my computer, not doing very much with itself. Chatting to my mum one day, she half-jokingly said “why not publish it?” – why not indeed?

With more half-enforced annual leave, I settled down for another long weekend, gathered everything together, pulled it into shape, and expanded it to form A Novel Approach, set to release on 8th August.

I still find it a struggle some days. The motivation to sit at the computer on evenings and weekends comes and goes. If it’s been a long day at the ‘office’, then the last thing I feel like doing is sitting on my own laptop for another couple of hours, but I am trying now, knowing that it CAN be done.

A few years ago, a colleague recommended a book to me – Eat The Frog. It’s based on the theory that to get on with things, you should tackle the biggest, most daunting task of the day first, then it’s out the way. But another line stuck with me more: Every day, do one thing to move towards your goals. I really liked that, and it applies to any goal you might have in mind. When it comes to writing, it can be writing a blog post, updating your Amazon biography, designing graphics on Canva, anything. At the start of June, I set up a graphic for this, and set it as the lock-screen on my phone, and it does make me feel a lot more motivated every time I see it.

One thing I haven’t done at all is write about Lockdown itself. I’ve seen some great poems from friends on Facebook about it, and about the situation we’ve found ourselves in, but for me, I’m definitely going down the escapism route. Especially since as I’m writing this, I should in a lovely little holiday cottage in Newton Stewart. If I cannot physically be in Scotland, I’ll write myself there instead! After all, what’s the point in being a writer if we don’t indulge our imaginations now and then…

Jennifer C. Wilson stalks dead people (usually monarchs, mostly Mary Queen of Scots and Richard III). Inspired by childhood visits to as many castles and historical sites her parents could find, and losing herself in their stories (not to mention quite often the castles themselves!), at least now her daydreams make it onto the page.

After returning to the north-east of England for work, she joined a creative writing class, and has been filling notebooks ever since. Jennifer won North Tyneside Libraries’ Story Tyne short story competition in 2014, and in 2015, her debut novel, Kindred Spirits: Tower of London was published by Crooked Cat Books. The full series was re-released by Darkstroke in January 2020.

Jennifer is a founder and host of the award-winning North Tyneside Writers’ Circle, and has been running writing workshops in North Tyneside since 2015. She also publishes historical fiction novels with Ocelot Press. She lives in Whitley Bay, and is very proud of her two-inch view of the North Sea.

You can connect with Jennifer online: