Today it's my pleasure to be shining the spotlight on author Emma Christie and her debut novel The Silent Daughter which is published tomorrow. 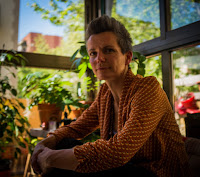 Emma Christie was born and raised in Ayrshire, Scotland. After studying literature and medieval history at Aberdeen University she spent five years as a news journalist with one of the UK’s top-selling regional daily newspapers, The Press and Journal, covering crime and politics. Emma now lives in Barcelona and works as a tour guide and lecturer in history, culture and politics, leading educational journeys across Spain, France, Portugal and Greece. She loves hiking and coffee and volunteered as a translator on a coffee farm in Nicaragua.

Can you tell us a bit about yourself and how your writing journey started?
I worked as a news journalist for five years and loved it – but realised what I really wanted to do was write fiction. I quit my newspaper job in 2010 to go travelling in Latin American and to start writing more seriously. A few years later I was signed to my fantastic agent, Caroline Hardman – and a few years after that I got a book deal for The Silent Daughter!

If you had to give an elevator pitch for your debut novel The Silent Daughter, what would it be?
The Silent Daughter follows the struggle of Edinburgh news reporter Chris Morrison as he searches for his daughter, Ruth. She’s registered as missing days after wife has an accident and ends up in a coma. Chris is desperately looking for answers, but instead finds a trail of lies and secrets that leads back to his family.

His wife is in a coma.

His daughter is missing.

And the only thing more unsettling than these two events . . . is what might connect them.

Some secrets can change a family for ever.

Which came first for you, the characters or the plot?
Definitely the characters. In fact I had the main character lingering in my head for years before I finally realised I need to listen to that voice and write the story. Sounds a bit odd, but that’s how it happened.

Has your experience as a journalist helped with the whole writing/editing process? In what way?
My work as a newspaper journalist has definitely helped me. Firstly, it taught me to write even if/when I don’t feel like it. Secondly, I very quickly got used to my work being edited/chopped to pieces at the newspaper! My editor told me a few times – once you’re finished an article, read through and identify any line you’re particularly proud of. Then delete it.

The Silent Daughter is set mostly in Portobello – what made you set the story here?
I fell in love with Portobello a few years ago when I was hamster-sitting for a friend. I’d lived in Edinburgh and visited loads of times, but somehow never knew it had such a magnificent beach! I chose it for the book because the characters have a strong connection to the sea. Also I love the contrast of writing about big skies and beaches  and nature - and also writing about Edinburgh’s Old Town. Portobello offers the perfect combination.

What advice would you give to any other aspiring authors?
Write, even when you don’t feel like it. Keep the faith even when finding an agent or getting a book deal seems completely impossible. Learn to accept rejection as a normal part of the process – and a useful learning tool. And make sure you write the story that you really want to write, not what you think other people want to read.

If you could write in a collaboration with another author, who would you like to write with and why?
That’s a tough question. I’m a total history geek and love all books by William Dalrymple. So maybe if he was exploring the history of Scotland or Spain, we could create an amazing historical suspense novel!

And finally what can we expect from you next?
I’m currently writing my second novel, also based in Portobello. Can’t say too much at this stage but I’m really enjoying working with the new characters…despite the fact some are quite creepy. I love the sense of adventure and possibility at this early stage of the writing process.