Today it's my pleasure to welcome author Tracy Baines back to the blog to talk about writing a Christmas themed book in the middle of Summer, over to you Tracy.

My kids might call me the Grinch from time to time. I do not embrace Christmas – until it’s Christmas. To me that occurs sometime around the 20th December and lasts until Boxing Day. I shudder when I see tins of Quality Street in the supermarket at the end of August, despair when the Christmas jingles are played in November. The reason it all ends on Boxing Day (for me) is because that’s the back to work day for those working in pantomimes. Christmas seemed all the more precious when you knew you had to be on the road again on Boxing Day morning. The theatre would be full of families who were in the very best of moods, full of food and fun. A time filled with joy and excitement – and laughter, lots and lots of laughter.

Christmas with the Variety Girls features a pantomime – because when you are in variety theatre Christmas is panto time. As this is the second book featuring the Variety Girls I already had my cast – I just needed to choose a panto.

I toyed with Cinderella – the most popular panto. I could have the Fairy Godmother give everyone a happy ending. I thought of Babes in the Wood, not a favourite but it would tie in nicely with evacuees and children being all alone. In the end I chose Aladdin – it fitted the theme perfectly – war had been declared and it was the first winter of the blackout. The darkness of life under threat and the light and sparkle of the theatre was the perfect blend. Oh, yes it was! And a magic lamp would light the gloom for my girls. 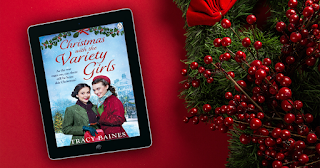 I was writing Christmas with the Variety Girls last summer when temperatures soared. I had one eye on my deadline of 1st November. The sweat on my brow was accompanied by the sweat that trickled down my back – this lady did definitely not gently glow. I sat at my keyboard trying to think of cold and frost, of fog and ice. In the end I just wrote the story and added the details and the winter layers as I began my edits.

And that’s the wonderful thing about the first draft. You don’t have to get it all perfect, you just have to get it written – everything can be polished afterwards. And so I carried on, windows wide open and not a breath of fresh air flowing through them, knowing I had plenty of time to add the wintery feeling. By the time I came to the second draft it was already October and much easier to conjure up images of Christmases past.

When I wrote short stories I always kept a small selection of Christmas magazines to hand, saved from the recycling bin once the season was over. Flicking through pages of brightly decorated houses and tables laden with perfectly cooked food propelled me into the right frame of mind. These days I can do the same on the internet. It’s so easy to generate the Christmassy feeling by looking on Instagram feeds and playing carols courtesy of Spotify. Everything is to hand at the click of a few keys. But, but … the most important place to find Christmas is in your memories and in your heart. It’s always there, ready to tap into if you simply sit quiet for a while and give yourself the space to remember.

May I wish you all a Merry Christmas, and may your celebrations be small and perfect.

Will Christmas bring an unexpected reunion?

Frances O'Leary has always dreamed of being a dancer. But after war is declared and the theatres begin to close, Frances and the variety girls must search for work elsewhere.

However, Frances is hiding a secret. As far as her best friend Jessie knows, Frances is a young aunt who adores her niece, Imogen – but what she doesn’t know is that their relationship runs much deeper. Now, with the sweetheart who cruelly abandoned her returning to England, will her secret finally be revealed...?

Tracy Baines was born in Cleethorpes, Lincolnshire. When she was eight her parents took over the management of the pub opposite the pier, The Pier Hotel.  Her father opened one of the rooms as a music venue bringing performers such as Wayne Fontana and the Mindbenders, Billy J Kramer and Billy Fury to start the ball rolling. So began her love of live entertainment.

From the age of sixteen, Tracy worked backstage during summer seasons, pantomimes and everything else in-between on the pier.  She met her husband when he was appearing with the Nolan Sisters and she was Assistant Stage Manager.

The first two books in the Variety Girls series are set in Cleethorpes, in the square mile that was her childhood home.

Tracy lives in Dorset with her husband and springer spaniel, Harry. Her children and grandchildren live close by.

Email ThisBlogThis!Share to TwitterShare to FacebookShare to Pinterest
Labels: Christmas in July, Guest Post, The Write Stuff with..., Tracy Baines