Today it's my pleasure to welcome author, journalist and performer Lauren Emily Whalen to the blog to talk about her latest book Two Winters. 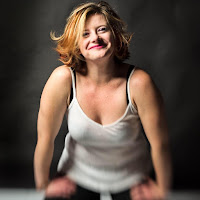 Can you tell us a little bit about yourself and how your writing journey started?
Sure! I am a writer, performer and Shakespeare enthusiast who lives in Chicago, Illinois, USA with my black cat Rosaline (named after a character I played in the Bard’s Love’s Labour’s Lost!). I didn’t start writing fiction until my late twenties, as I have degrees in theater and law and a professional background in nonprofit fundraising and corporate administration. However, I’ve always loved to read, and once I started writing, I found I couldn’t stop!

My short stories have appeared in three different anthologies, and I have written four books for young adults: one nonfiction and three novels. My latest novel, Two Winters, is now available in print and digital everywhere you buy books.

If you had to give an elevator pitch for your latest book Two Winters, what would it be?
Two Winters is a queer young adult reimagining of Shakespeare’s The Winter’s Tale, about birth, death, Catholic school, improv comedy and the healing nature of time.

The winter of 1997 is a tragedy waiting to happen. Small-town life isn't easy for seventeen-year-old bisexual and closeted Paulina, especially when her best friend Mia becomes pregnant and doesn’t want to tell the baby's father, Paulina's other best friend, Tesla. Meanwhile, Paulina's secret relationship with volleyball star Ani is about to go public. One fateful night, everything changes forever.

In the winter of 2014, Perdita, bi and proud in Chicago, is weeks away from turning seventeen. She loves her two moms, but why won’t they talk about her adoption? When Perdita meets improv performer Fenton, she discovers both a kindred soul and a willing accomplice in her search for the truth. Will Perdita find what she's looking for?

Where did the inspiration come from to do a retelling of Shakespeare's The Winter's Tale?
I wasn’t too familiar with the play until a few years ago (even for theater people and Shakespeare fans like me, it’s not as well known as say, Romeo and Juliet or Twelfth Night). I finally read the play before I auditioned for a production, and I was cast as Paulina, a role I absolutely loved playing. I was really blown away by the play’s strong female characters and its theme of redemption across time. At the same time, my first novel Satellite was released, and though I didn’t intend to keep writing YA, I couldn’t stop thinking about what would happen if I set the story of The Winter’s Tale among teenagers, partially at Catholic school (which I attended from ages 5 to 21, so I know a bit about it!).

What attracted you to writing YA as opposed to any other genre?
I actually do write other genres! I’m a published erotica author and my current work in progress is more New Adult, as the protagonists are in their early twenties. I’m also a freelance journalist and critic.

I think YA is special in that it really emphasizes the individual journey - and that’s why adult readers are attracted to it as well.

What comes first for you, characters or plot?
Even when I’m writing a reimagining of an existing text (which is the case with Two Winters and my next book, Take Her Down, which is an homage to Shakespeare’s Julius Caesar), the characters definitely come first for me. With Paulina and Perdita, the narrators in Two Winters, I imagined two young women who had a lot in common (identify as bi/queer, love science and have supportive parents), but also were growing up in two different eras (the 1990s and the 2010s) in very different locations (a small farm town and a major city, respectively) and what that would look like. Then came their families and friends, and everything else followed!

Do you have a typical writing day or routine?
I don’t write every day unless I’m on deadline (which I am right now, for two different books and a lot of freelance articles!). I like to be comfortable, so a lot of times I’m still wearing my pajamas and sitting on my bed or couch, while trying to keep my cat from walking on my keyboard! I usually have a cup of coffee and a podcast on - I don’t like to listen to music while I write, but I like podcasts for the white noise. I also love writing in coffee shops - besides my family, that’s what I missed most when everything was shut down!

And finally, what can we expect from you next?
My next book, Take Her Down, will be released by Bold Strokes Books on March 15, 2022 (the Ides of March), and is now available for preorder in paperback and ebook. It’s a female-driven queer YA reimagining of Julius Caesar, following a young woman named Bronwyn, her cousin Cass and her boyfriend Porter scheming to keep Bronwyn’s ex-best friend Jude from becoming student body president at their competitive high school...and resorting to extreme measures, with disastrous results. It’s very different in tone from Two Winters, and I had a lot of fun writing it!