My debut spotlight guest tonight is Jane Lark who has popped along to the blog to tell us a little bit about her historical fiction novel Illicit Love which has just been published by Sapphire Star Publishing.

Trapped under the reign of a cruel keeper, Ellen Harding longs to be free. Under his oppression, her soul and conscience have died while her body lives on, fulfilling his dissolute desires. She is empty––a vessel––deaf to the voice of morality and blind to shame.

When her eyes are drawn to a beautiful man for no other reason than his looks, she imagines what it would be like to escape her chains for a night by giving her body to him.

But Edward Marlow is kind and gentle when he touches her, and her subconscious whispers, this man could be her salvation. Yet how can he help her when she has secrets which prevent her freedom?

Edward is restless, lonely, and a little angry with his lot in life—it is his only excuse for being drawn to another man’s mistress. The woman’s dark hair and pale eyes are striking, and he cannot take his gaze off her while she watches him over the top of a fan with an illicit intent in her eyes.

Once he’s known her, he cannot forget her, and once he’s seen the evidence of her supposed benefactor’s brutality, he wants to help her. But how can he when she will not run any more than she will speak of her past?

When a desperate Ellen finally relents and shocks Edward from his sleep, he doesn’t hesitate, he helps her flee .He just doesn’t know he’s running headlong into the secrets of her past.

I’m discussing Harriette Wilson’s memoirs on my blog, if you would like to discover her story. 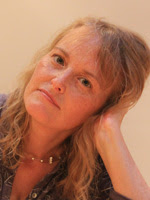 Jane is a writer of authentic, passionate and emotional love stories.

She began her first historical novel at sixteen, but a life full of adversity derailed her as she lives with the restrictions of Ankylosing Spondylitis.

When she finally completed a novel it was because she was determined not to reach forty still saying, I want to write a book.

Now Jane is writing a Regency series for Sapphire Star Publishing and she is thrilled to be giving her characters life in others’ imaginations at last.

Jane is also a Chartered Member of the Institute of Personnel and Development, and uses her knowledge of people to bring her characters to life.

‘Basically I love history and I’m a sucker for a love story. I love the feeling of falling in love; it’s wonderful being able to do it time and time again in fiction, and my understanding of people helps me write the really intense relationships I enjoy developing. I like writing characters who will capture your attention from the moment you open my book.’


Can you tell us a little bit about Illicit Love?
When I read the memoirs of a real 19th Century courtesan, Harriette Wilson, I was captured
by the intensity of a section of her story, where she tells her readers how she fell in love.

It was then I knew I wanted to write a love story for a courtesan, and it had to be very intense, echoing the sudden attraction Harriette experienced.

Illicit Love is not Harriette’s story, but I hope I have captured reality in Illicit Love, both of the 19th Century setting, and the intensity of Ellen’s and Edward’s relationship. They are fighting against the odds when they meet, just as Harriette was, and you meet them as people, with faults, and secrets, and needs. The history in Illicit Love is merely the backdrop. The story is Edward’s and Ellen’s relationship.

Many people who don’t normally read historical romances, have said to me they couldn’t put it down, and I think this is because the story is so focused on the characters.

What was the inspiration behind setting your book in the 19th century rather than in modern times?
My parents belonged to an amateur archaeological society, and as a child, I used to field walk with them, under my Dad’s bribery of Kendal mint cake to keep us going.

You are going to have to Google Kendal mint cake, if you don’t know what it is J.

Even then I used to walk across ploughed fields picturing, armoured knights, the romans, or saxons who’d walked across the ground before me. Then I discovered the novelist Anya Seaton, and from that moment on I was desperate to write my own historical novel. I settled on the 19th Century because this era has such a wealth of letters and memoirs to draw stories from. There are so many fascinating people who lived then.

Which comes first, the characters or the plot?
Definitely the characters for me, I have changed plots before now, simply because I realised the character wouldn’t do that. My ideas usually begin with one image. But the image is immediately surrounded by an understanding of what that person is thinking and feeling in that moment. This defines their character, and then off my imagination tumbles, building the story behind the scene.

Are you able to give us a hint as to what your next novel is about?
Oh absolutely, because the story begins in Illicit Love.

Book 2, in the family series, the Marlow Intrigues, is Robert’s, Edward’s brother’s, story. Robert’s story will be out in August 2013.

How long did it take you to get your first book published?
It has taken me over ten years to achieve a publishing contract, and a lot of hard work, but persistence has paid off, and last year I took heart to be told, by two very widely published authors, that it took them ten years too.

Do you have a set daily writing routine?
I’m a writing addict. In my thirties I gave up waiting for the right moment and place to write, and just started writing, and now, around my day job, I write at any moment I can.

If you could give one piece of advice to an aspiring author, what would it be?
Basically I’ve given my advice above, give up waiting for the right place and time and just begin, and once you’ve begun, continue. An experienced author said to me last year, when I was tearing my hair out with rejections, ‘Well, if you give up, you definitely won’t get published.’ Now, this year, I’ll have four books out by December 2013, because I have a backlog of completed books.

Do you prefer to read physical copies of books or e-books?
I have a condition called Ankylosing Spondylitis, which is a Rheumatic disease. I write a blog which tells my personal story about this too, mainly for other suffers, so they can benefit from my experience. This disease means I find it very uncomfortable to stay in one position for long, which means holding an e-book reader for ages is really painful, so I still prefer physical copies which mean my hands need to move to turn pages.

Are there any books you’ve read that you wish you’d written?
Elizabeth Chadwick’s. I started writing about the same time Elizabeth’s first novel came out, then I discovered Elizabeth’s books, and she was writing the same stories in the same way. So I gave up medieval stories then. The Regency era market is flooded with authors, but so far I haven’t discovered anyone who writes exactly like me.

Can you describe Illicit Love in 20 words or less?
Edward is gentle when he touches Ellen. Ellen senses her salvation, but can love redeem a
life of sin?

If you read Illicit Love, I’d appreciate feedback, so please leave a review on Amazon, and you
can also let other readers know what you think on the Illicit Love Book Club page.

I hope you enjoy it.

Thank you for giving me the opportunity to reflect back and answer your questions, Shaz,
I’ve enjoyed it.

Jane has also offered one lucky reader the opportunity to win the goodie bag below which includes a signed copy of the book, bag, mug, keyring, bookmark, pen and postcard. 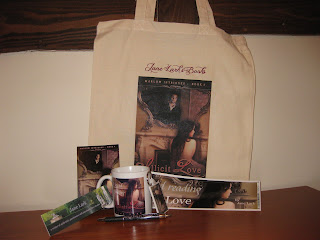 The giveaway is open to UK residents only, to enter simply follow the instructions on the Rafflecopter form below.  Entries will close at midnight on 25th May when I'll then contact the winner to get postal details to pass to Jane to send the goodie bag to you.

a Rafflecopter giveaway
Posted by Sharon at 23:41