Today I'm delighted to be introduce you to Holly Martin whose debut YA novel The Sentinel is being published next week. 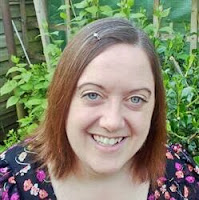 I live in sunny Bedfordshire in a house with round windows. I studied media at university which led to a very glitzy career as a hotel receptionist followed by a even more glamorous two years working in a bank. The moment that one of my colleagues received the much coveted carriage clock for fifteen years service was the moment when I knew I had to escape. I quit my job and returned to university to train to be a teacher. Three years later, I emerged wide eyed and terrified that I now had responsibility for the development of thirty young minds. I taught for four years before History Off The Page came to my school to do a Tudor day. I now drive round the country in my little white van, dressing up as a Viking one day and an Egyptian High Priestess the next.

I love to write. The characters do exactly what I want them to do, most of the time. Sometimes they do seem to go off and do their own thing without my permission. It is complete escapism into a world where I have full control.

I've been writing for four years now, every spare second I have, I'm scribbling ideas in a notebook or typing a scene on my laptop. I have written three romantic fiction books. Changing Casanova and The Chainsaw Masquerade were recently shortlisted for the Festival of Romance New Talent Award. In June, this year, my short story One Hundred Proposals won the Belinda Jones Travel Club short story competition and was published in the Sunlounger anthology.

When Eve is rescued from a horrific coach crash by her teachers, she is shocked to discover they possess super strength and speed. But what happens next is even more harrowing.

In the aftermath of the crash she discovers that everyone in her life from neighbours, doctors, dentists, teachers, shop keepers and even her family and friends are actually super strength Guardians sent to protect her. They all have one thing in common, a single minded ferocity that she must be kept alive at all costs.

However, she is surrounded by secrets and lies. Those in the know deny all knowledge of what happened that fateful night. Everyone else carries on as normal, seemingly unaware of the new strange world that she has stumbled against.

With the help of Seth, her best friend, Eve discovers the prophecies surrounding her true identity and the super strength she too holds. With her Guardians pledged to protect her, her closest friends ready to die for her, her own hopes and dreams are put on hold whilst she battles to control the amazing powers she has been bestowed with.

But those that seek to destroy her move ever closer. Will the Guardians be enough to protect
her when so many are prepared to stop at nothing to see her dead? And will she be strong
enough to fulfil her destiny when the time comes?

Can you tell us a little bit about where the inspiration came from to write The Sentinel?
I used to be a teacher and so many of the books that the children were reading had strong male characters, Alex Rider, Young James Bond, Percy Jackson, Harry Potter and the girls loved these books too. It struck me that there wasn’t many action adventure books with strong female leads so I decided to write one. Eve is tasked with saving the world, although at the age of seventeen she doesn’t yet know about this secret destiny. I loved the idea of someone's true identity being kept from them and how many people would need  to be involved to keep Eve’s destiny a secret. Her teachers, doctors, neighbours and even her friends and family are actually super strength beings sent to protect her and I love that moment in the book when she realises her whole life has been a lie.


What inspired you to write a YA fantasy novel as opposed to any other genre?
I write YA and Chicklit. Most of my books are actually Chicklit, but The Sentinel was something I just felt I had to write. I kept dreaming about it, or imagining scenarios. In my head The Sentinel would make an epic film and in the end I just had to put pen to paper, or rather my fingers to the keys and write it down.

If you could have The Sentinel made into a TV series or film, who would you cast in the main roles?
Since I’ve seen The Host, by Stephanie Meyer, the only person I really see in my head when I think of Eve is Saoirse Ronan, who plays Melanie in the film. I’m not sure who I had in my head before I saw this film, but it’s definitely Saoirse now. For Seth I would have Kellan Lutz who played Emmet Cullen in the Twilight series, because he is big and lovely and I think would do a good job of looking after Eve. Eli and Lucas would be played by Chris and Liam Hemsworth. Again their size is important, the Guardians are super strength beings after all.

Can you describe The Sentinel in 20 words or less?
With high speed car chases, airborne fights, amazing stunts and super-powered beings, it’s a story of loyalty, friendship and love.

You recently won the short story competition to have your story featured in the Sunlounger collection, are you likely to write a women's fiction novel in the future?
I have written a short for a Christmas anthology called Merry Chicklit which is out soon, and all proceeds go to Breast Cancer charity, ‘Rocking the Road to a Cure.’ My little story, Iced Dreams, is a funny, heart-warming twist on the Cinderella story. My next published novel is called The Guestbook and it’s out in January. It’s a Chicklit novel based around the different guests that stay in a holiday cottage in Norfolk. I can’t wait for everyone to read it, it’s a very different way of telling a story.

Follow Holly on Twitter for more news about her books: @hollymartin00 or visit her at http://hollymartinwriter.wordpress.com or http://thesentinelseries.wordpress.com
Posted by Sharon at 05:14