Today it's my absolute pleasure to welcome Antonia Hodgson to the blog to talk about her second book The Last Confession of Thomas Hawkins which was published yesterday. 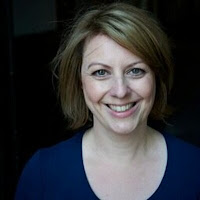 Can you tell us a little bit about your latest book The Last Confession of Thomas Hawkins?
It begins with a prologue. Tom Hawkins is travelling through the streets of London on a cart draped in black crepe, with a coffin at his back. He’s on his way to the gallows at Tyburn, where he will be hanged for murder - though he protests his innocence. We learn that he has been promised a royal pardon, but as the cart rolls closer to the scaffold, he begins to fear that he’s been betrayed.

The novel then travels back a few weeks to January 1728 and we discover how Tom came to be tried for murder. And we realise that he’s writing this account as his final confession, from prison.

It’s quite a dark book, really. But there are some jokes in it, I promise.

Had you always intended to write this as a sequel/follow on to The Devil in the Marshalsea or did it just creep up on you as you wanted to continue Thomas' story?
When I wrote The Devil in the Marshalsea I wasn’t sure if it would find a publisher. In fact an editor friend of mine said, rather despairingly, ‘Oh god, don’t write about the Georgians! No one buys books about the Georgians!’ I always hoped I might get to continue the story, though. I wanted to explore Tom’s character further - see how he progresses. He intrigues me, because he’s still young and capable of significant change. What happened to him in the Marshalsea has affected him deeply and has repercussions in this new book - though he doesn’t necessarily understand that himself. It’s hard to see these things when you’re living through them.

How much research did you have to do about crimes and their punishments during the Georgian era?
It’s a fascinating subject to research - I read a great deal of primary and secondary sources. Criminals played a peculiar role in London society. People were (quite rightly) terrified of being attacked. The streets weren’t safe, especially at night, and there were violent gangs at work. But at the same time, criminals were often romanticised. The Beggar’s Opera was performed for the first time in 1728 and it was an absolute sensation. It’s hero is Captain Mackheath - a highwayman. And people idolised a young criminal called Jack Sheppard, who was famous for his daring prison breaks.

I wanted to explore this criminal underworld in the form of gang captain James Fleet. (The half-brother of Samuel Fleet, for those who’ve read The Devil in the Marshalsea.) But funnily enough I think the nastiest character in the novel is probably Charles Howard - who was married to Henrietta Howard, the king’s mistress. Lord Hervey described Howard as ‘wrong-headed, ill-tempered, obstinate, drunken, extravagant, brutal’. And that was on a good day.

What is it about this Georgian era that appealed to you as opposed to any other historical period?
I was drawn to it partly because it felt so neglected - especially the 1720s and 1730s. I’ve no idea why - you only have to look at a few Hogarth prints to know this was the place to be. Dangerous, witty, exciting, chaotic, questioning, subversive and bursting with life.

Can you describe Thomas Hawkins in three words?
Often quite drunk.

What can we expect from you next?
I’m working on my third novel, but I’m only part way through at the moment and don’t want to jinx it by going into too much detail. It’s set in the 1720s, up in Yorkshire. I loved the research for this one. Lots of personal letters and estate accounts, but also lots of stomping around ruined abbeys and wild moors.

What attracted you to writing historical fiction as opposed to any other genre?
It really was Tom’s character that drew me in, and then I just fell in love with period. My first book is set in autumn 1727, the second in winter/early spring 1728, the third in late spring 1728. Perhaps one day I’ll live dangerously and reach 1729.

Do you have set designated writing time or do you have to try and fit in writing around your busy work/home life?
I work in publishing three days a week and write on the other four. I also took a three-month sabbatical last year, which gave me the time I needed to research book three. I write pretty much solidly Friday to Sunday, and will often jot lines and ideas out during the week. I also use my holidays for writing. And I often think about the latest book on my walk to work. So in short - yes I have a set designated writing time, and yes I also fit in writing around my work/home life!

What is the best writing advice you have ever received?
One of the best lines I ever heard was from Nora Roberts, who basically just said ‘sit on your ass and write’. Inarguable. (Unless you have one of those weird standing desks.) She also pointed out that you can’t edit a blank page. And I think Stephen King’s book On Writing is well worth reading. There’s some terrific practical advice, but I also like his lack of pretention. He’s serious about his work, but he doesn’t take himself seriously.

Have you got any exciting plans for publication day?
By coincidence, a good friend of mine is publishing a children’s book on the same day - 4 June. So we’re going to have lunch and raise a toast to each other. It’s not quite an eighteenth century debauch, but we’ll try our best.

Spring, 1728. A young, well-dressed man is dragged through the streets of London to the gallows at Tyburn. The crowds jeer and curse as he passes, calling him a murderer. He tries to remain calm. His name is Tom Hawkins and he is innocent. Somehow he has to prove it, before the rope squeezes the life out of him.

It is, of course, all his own fault. He was happy with Kitty Sparks. Life was good. He should never have told the most dangerous criminal in London that he was 'bored and looking for adventure'. He should never have offered to help Henrietta Howard, the king's mistress, in her desperate struggles with a brutal husband. And most of all, he should never have trusted the witty, calculating Queen Caroline. She has promised him a royal pardon if he holds his tongue but then again, there is nothing more silent than a hanged man.

Based loosely on actual events, Antonia Hodgson's new novel is both a sequel to The Devil in the Marshalsea and a standalone historical mystery. From the gilded cage of the Court to the wicked freedoms of the slums, it reveals a world both seductive and deadly. And it continues the rake's progress of Tom Hawkins - assuming he can find a way to survive the noose...
Posted by Sharon at 06:40