It's publication day today for Eva Holland's debut novel The Daughter's Secret and it's my pleasure to welcome Eva to the blog so that we can find out a little more about her writing journey and the book. 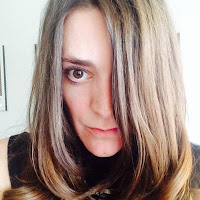 A lifelong lover of words and stories, Eva Holland was the winner of the 2014 Good Housekeeping novel writing competition. She grew up in Gloucestershire and studied in Leeds before moving to London. When not writing or reading fiction she works as a freelance PR consultant and copywriter.

Can you tell us a little bit about your debut novel The Daughter's Secret?
Thank you very much, Sharon, for inviting The Daughter’s Secret and me into your book boudoir!

The Daughter’s Secret is a psychological thriller that follows eleven days in the life of Rosalind Simm. Rosalind lived a normal life with her husband and two children until her fifteen-year-old daughter’s shocking disappearance with teacher Nathan Temperley propelled the family into the public eye. Six years later, Rosalind discovers that Temperley is about to be released from prison. As she grapples with the shadow his early release casts over her family, Rosalind must face the way the events of the past have shaped their lives.

There have been several highly publicised cases of teacher/pupil relationships in the past, did you research any of these to try and get an insight as to how these relationships develop?
I did do research into pupil/teacher relationships and was shocked by how frequently they are reported in newspapers. I was interested in understanding how the pupils involved are affected over time, as they became adults and developed adult perspectives on their teenage experiences. Some of the accounts I read made for very sad reading and confirmed my feeling that it is never acceptable for a teacher to abuse the trust placed in him or her in this way.

If you had to describe The Daughter's Secret in one sentence, what would it be?
The Daughter’s Secret is the story of eleven days in the life of Rosalind, a mother trying to navigate herself and her family through the devastating aftermath of her teenage daughter’s relationship with a teacher.

What can we expect from you next?
I’m working on a second novel at the moment. It is in the early stages so I can’t say too much about it, but it is a psychological thriller with a mystery at its heart.

How did your writing journey start?
I’m one of the many people who knew from a young age that I wanted to write a novel but took a long time to get there. I didn’t write more than a few pages of fiction from the time I left university until I was 31, although I spent most of my days writing for my job in public relations. I had countless ideas for novels but couldn’t find the confidence to write them down – with hindsight I think I was too afraid of failing to allow myself to try. When I realised it had been ten years since I had graduated I knew I had to take action and enrolled in a short online creative writing course. Once I started I couldn’t stop and I was soon getting up at 05:30 to write before work.

If anyone reading this has always dreamed of writing but has struggled to make a start, please do give it a go. I don’t think you’ll regret it!

As you're just about to publish your debut novel, what advice would you give to other aspiring authors?
Finish your novel! I know that sounds simple but it really is the most important and the most difficult thing to do. It takes such a long time to write (and re-write and re-write and re-write) a novel that there are many opportunities for doubt to worm its way in and throw you off course. It can be really challenging not be distracted by worries about publishing or, if you are like me, to drive yourself to distraction by questioning whether you are writing ‘the right’ novel. My advice is to listen to your instincts – if you love and believe in your story and your characters don’t let yourself worry about anything other than getting to the end of your novel then polishing it until it’s as good as you can make it.

Are you going to/have you treat yourself to something special to celebrate publishing your debut novel?
My big treat is giving myself some time off from my job in PR to work on my second novel. It is a real luxury to be able to spend whole days alone with my characters in spite of the fact that some of them aren’t very nice!

Finally have you anything exciting planned for publication day itself?
Writing! I’m very excited about my next novel and there is nothing I want to do more than write it. I will spend the morning writing at home then head off to the gym for a swim and a sauna. For some reason I seem to have all my best ideas in the swimming pool and many of my notebooks carry the whiff of chlorine from where I have dashed out of the pool to scribble something down with damp hands. A trip to the pub and a glass of red wine or two may well feature in the evening!

My daughter is a liar. A liar, liar, liar. And I'm starting to see where she gets it from.

When Rosalind's fifteen-year-old daughter, Stephanie, ran away with her teacher, this ordinary family became something it had never asked to be. Their lives held up to scrutiny in the centre of a major police investigation, the Simms were headline news while Stephanie was missing with a man who was risking everything.

Now, six years on, Ros takes a call that will change their lives all over again. He's going to be released from prison. Years too early. In eleven days' time.

As Temperley's release creeps ever closer, Ros is forced to confront the events that led them here, back to a place she thought she'd left behind, to questions she didn't want to answer. Why did she do it? Where does the blame lie? What happens next?
Posted by Sharon at 07:45