This week is certainly proving to be a week of debuts and today it's my pleasure to be spotlighting another author Corrie Jackson whose debut novel Breaking Dead was published as an eBook yesterday, paperback being published later this year. 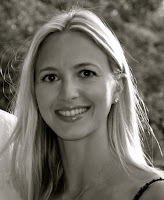 Corrie Jackson has been a journalist for thirteen years. She worked on staff at Harpers Bazaar and The Daily Mail before joining Grazia as Commissioning Editor in 2004. Two years later she became Glamour magazine's Features Director, then Assistant Editor, until 2013 when her husband was given the opportunity to relocate the family to Los Angeles for his career. Corrie continued freelancing for magazines and newspapers, as well as dedicating the time to her debut novel. Corrie and her family have just returned to England. She now lives in Surrey, where she has just had her second child and is working on her second book. Follow Corrie on Twitter @CorrieJacko or via her website http://www.corriejackson.com

Can you tell us a little bit about your debut novel Breaking Dead?
It’s a crime thriller set in the fashion industry. On the eve of London Fashion Week, a Russian model is found mutilated in a five-star hotel. Leading the press charge is crime reporter, Sophie Kent; a talented journalist on the brink of a breakdown following her brother’s suicide.

Where did the inspiration come from to write about the dark side of the fashion industry?
Fashion is dark. I was at GRAZIA when anorexic catwalk model, Luisel Ramos, dropped dead of a heart attack during a fashion show; when up-and-coming model, Sally-Anne Bowman, was raped and stabbed to death outside her home. I was at GLAMOUR when Isabella Blow and Alexander McQueen committed suicide; when gruesome sexual harassment claims against photographer Terry Richardson made headlines. Over a decade in magazines taught me that glamour and violence go hand in hand. So, it didn’t feel like a huge stretch to set a crime thriller in the fashion industry.

If you had to describe your leading character Sophie in three words, what would it be?
Smart, stubborn, sinking.

What attracted you to writing a crime thriller as opposed to any other genre?
PD James once said: I don’t think we necessarily choose our genre; the genre chooses us.’ I totally agree. I’m a crime nut and always have been. I was raised on Nancy Drew and Sherlock Holmes. My thirteenth birthday party was Sherlock-themed, complete with deerstalker cake. The writing was on the wall, even then!

What can we expect from you next?
The second book in the Sophie Kent series is underway. When the body of a pregnant woman washes up on the banks of the Thames, the evidence points to Sophie’s friend, Charlie Swift. Except Charlie is missing. Sophie goes all out to prove his innocence, but when she’s drawn into his dark life, and his sham of a marriage, she is forced to face the truth: is he really missing – or is he a murderer?

Do you think your experience as a journalist helped with the writing/editing process?
Yes and no. The real-life stories I’ve worked on over the years gave me tons of material. In fact, the inspiration for Breaking Dead came from a murder story I worked on at GRAZIA. Another advantage is that my work has been critiqued by magazine editors for so long that I’m not very precious about my work. In fact, the more input from editors and copy-editors the better. The major downside is that I find it hard to take off my editing hat. Not helpful when it comes to bashing out a first draft. Still, I’m learning to control the urge to tinker.

What essentials do you need to have nearby when sitting down to write?
Noise-cancelling headphones. I write at home, which worked for my first book because my son was at preschool in the mornings. I recently had my second child and started book two when she was only eight weeks old. I found it really hard to switch off knowing she was in the house. Now I slide the headphones on and plug myself in. A bomb could go off in my street and I wouldn’t notice.

What’s the best piece of writing advice you’ve received?
You know, Kurt Vonnegut once said, ‘When I write, I feel like an armless, legless man with a crayon in his mouth’. Boy, do I know how that feels. Some writing days are torturous. Scratch that, most days are. But when anxiety sets in, I remember the advice my former editor, Jo Elvin, follows whenever she second-guesses herself. Hold your nerve. Nothing kills creativity faster than self-doubt. So, if you find yourself giving air-time to negative thoughts: Hold. Your. Nerve.

Did you treat yourself to something special to celebrate your publishing deal?
No! My ‘book deal moment’ was sandwiched between moving back from Los Angeles and giving birth to my daughter. It didn’t sink in. In fact, it still hasn’t. I’ll definitely treat myself when the book comes out. Although right now I’d settle for a full night’s sleep!

Newspaper journalist Sophie Kent is hanging by a thread following her brother's suicide, her personal life in chaos.

When the mutilated body of a Russian model turns up in an upmarket hotel on the eve of London Fashion Week, Sophie recognises her from a recent interview and knows she could have saved her. Eaten away by guilt, she throws herself headfirst into the edgy, fast-paced world of fashion with one goal in mind: to catch the killer. Only then can she piece her grief-stricken self back together. As she chips away at the industry's glittery surface, she uncovers a toxic underworld rife with drugs, secrets, prostitution and blackmail. Battling her demons and her wealthy, dysfunctional family along the way, Sophie pushes her personal problems to one side as she goes head to head with a crazed killer; a killer who is only just getting started...

Thanks to Corrie's publishers I also have an extract from Breaking Dead to share with you.

Her skin is perfect.
Pink and plump. The way it puckers in the cold night air sends a surge of heat through my bones. It lights me up with longing, and desire, and fury. White fury, so intense it makes me itch.
She is spread-eagled on the mattress, eyes closed, her dark hair smeared across her forehead in wet ribbons. I suck on my cigarette. Watch her through the smoke. She turns her head away from me. No matter. I don't need to see her face. I know it like my own. Can           picture the dusky curve of her eyelid, those apple-sweet lips.
A fox screams in the distance. I cock my head to one side, then roll the cigarette between my thumb and forefinger. The breeze coming through the shed window tugs at my hair like a sticky toddler. Reaching out, I drive the cigarette into the hollow of her throat.
A hot, red hiss of burning skin.
My body hums.
Someone shifts beside me, breaking the spell.
'Ready?'
His voice is gruff. Like velvet dragged across gravel.
'Take your time, she isn't going anywhere.' My eyes slide down to the restraints around her wrist; the slick of tape over her mouth.
Against the wall, more shadows watch, waiting their turn. The end is coming. I'm sure of it. These purple, pain-soaked nights aren't enough any more. She isn't enough. I see how fast their smiles drop, their eyes dull, once it's over.
He sweeps past me. I catch a waft of stale sweat and pear drops.
Can hear him sucking. The click as the sweet skates over his teeth.
He kneels down beside her. Unbuckles his belt. I can't look away.
She turns towards me. Begging silently in the dark. Her pupils are black and shiny, like liquorice.
Liquorice was my daddy's favourite. He always gave me a twist of liquorice when he finished touching me.
I stare at the wound blistering on her neck.
Now her skin is perfect.

If you'd like to read a little more, Chapter 1 can be read online here.
Posted by Sharon at 07:45