Today it's my pleasure to be shining the spotlight on another debut author Siobhan MacDonald whose debut novel Twisted River was published this week.  I'm really looking forward to reading Twisted River although not sure how quickly that will be as TBR pile is already overflowing but I can share with you an extract below to whet your appetites. 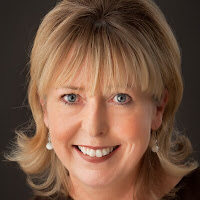 Siobhan MacDonald was born in Cork in the Republic of Ireland. She studied in Galway, and worked as a technical writer in Scotland for ten years, then in France, before returning to Ireland. Twisted River is her debut novel and was inspired by her own experiences of holidays gone wrong. When the English country house where she was staying swarming with police one day, the hotel manager assured her was due to celebrity guests. It was later revealed a couple in the room next door had taken part in a suicide pact. On another occasion she was almost abducted by an unlicensed taxi driver in America who wanted her to write up his US Government conspiracy theories.

Kate and Mannix O’Brian live in a lovely Limerick house they can barely afford. Their autistic son is being bullied and their daughter Izzy is desperately trying to protect him. When Kate spots a gorgeous New York flat on a home-exchange website, she is convinced her luck is about to change…

Hazel and Oscar Harvey and their two children live on Manhattan’s Upper West Side. Though they seem successful on the surface, Hazel’s mysterious bruises and Oscar’s secrets tell another story. With Hazel keen to revisit her native Limerick, the house swap seems almost too perfect.

When Oscar discovers the body of a woman in the boot of his hosts’ car, he realises this will be anything but a perfect break. And the body is just the beginning.


Hazel winced at her reflection in the mirror. It hurt like hell when she touched there above the cheekbone. With her finger, she patted, searching gently at the back of her head. Where was it again?

“Ouch...” She’d found it. That hurt like hell too. The size of a conker, they would say at home in Ireland. Only this was not a glossycoated chestnut but a bulbous contusion above the base of her skull. She hadn’t been able to sleep on her back— even if she’d felt like sleeping.

She had wondered about going to the emergency room at Weill Cornell but this would be the second time in as many months. She didn’t need the attention— or the incident reports. And anyway, some of those guys played squash with Oscar.

It was 6:15 a.m., still quiet, as she hovered over the twin sinks in their en suite bathroom. Oscar always allowed her these few quiet moments to herself. The penchant for the double sink had always mystified her. After all, who really wanted to perform their morning ablutions side by side, one shaving, another gargling, or spitting toothpaste into the adjacent drain? Maybe in the first flush of a relationship or a marriage. Neither of which applied to Hazel and Oscar.

Leaning over the marble bowl, she edged closer to the mirror. Blood bursts flecked her eye white, and the eyelid had swollen a mix of red and purple. The whole of her left eye socket was swollen, giving it a reptilian quality. Raising her fringe, she saw how the jagged gash his ring had made was crusting over. The fringe hid that, at least.

Brushing her teeth was agony, her jaw still aching and bruised from where she’d hit the wall. She opened her mouth as wide as she could and moved her jaw from side to side. It felt stiff. Even her neck felt sore as she bent to spit the spearmint saliva from her mouth. As she straightened up, a shadow fell across the room.

She had her answer. He wasn’t mad anymore. As she stood immobile, Oscar moved behind her, circled her waist, and dropped his head into the crook of her neck— a gesture of submission. Her nostrils filled with the smell of him, the musk of his gray- white hair, his slept-in T-shirt, and the faint odor of stale coffee.

“What has become of us?” he asked of their reflections in the mirror.

“Don’t,” she whispered, worried at the emotion that threatened to well up.

Releasing her, he took a step back.

But she had to do this. No matter what he said. She just had to.

“I must,” she said quietly, examining her palette of eye shadow. Should she accentuate the purple or mask it?

“You can’t go into a classroom looking like...like...” He faltered.

Funny that underneath it all, Oscar was conservative, cared what people thought. Something to do with his Anglo- Saxon heritage, perhaps?

Twisted River by Siobhán MacDonald is published on 18th April by Canelo, price £1.99 in eBook.
Posted by Sharon at 07:15