Today it's my pleasure to be shining the spotlight on Benjamin Ludwig and his debut novel Ginny Moon on latest leg of his blog tour. 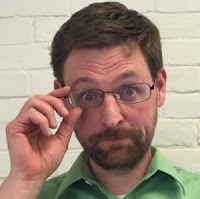 Benjamin Ludwig is a middle school language arts teacher, who has been teaching both children and adults since 1997. He believes strongly in supporting the voiceless and the displaced, especially their need for attachment.  Shortly after he and his wife were married they became foster parents, and adopted their first placement: a teenager with autism and developmental disabilities. Ginny Moon was inspired in part by conversations he had with other parents at Special Olympics basketball practices. He hopes to adopt again after his daughter transitions into adulthood.  Benjamin lives in New Hampshire.

Can you tell us a little about yourself and your writing journey?
I started writing in fourth grade – when I was nine years old – and haven’t stopped.  It’s an addiction.  I’ve always been a reader as well, but once I was capable of writing my own stories I wrote a lot more than I read.  A story is a writer’s psychology, externalized. Writing became a way of thinking, a way of being for me.  Up until this year I was a public-school teacher, and I have children of my own, so the only time I could write was before the family woke up in the morning, and during my lunch break.  Now that Ginny Moon is published, I’m going to take a year to write my second book.  It’s going to be a new experience, writing all day! Very much looking forward to giving it a try.

Why’s Ginny Moon so original?
The original title of the book was The Original Ginny Moon, but “The Original” was nixed because her name (and voice) became a force unto itself.  But “The Original” was meant to reference the idea that now, in the present-tense of the story, she is reconnecting with who she used to be, and the circumstances that formed her.

If Ginny Moon had a favourite book, what would it be?
Actually, Ginny Moon does have a favourite book.  She loves The Rosie Project, by Graeme Simsion.  She wrote him a letter about it – I’ll attach it here!  It might help to know that Graeme wrote an endorsement that appears on the cover of Ginny Moon. That’s what Ginny is talking about when she says, “I saw your name on it too…” 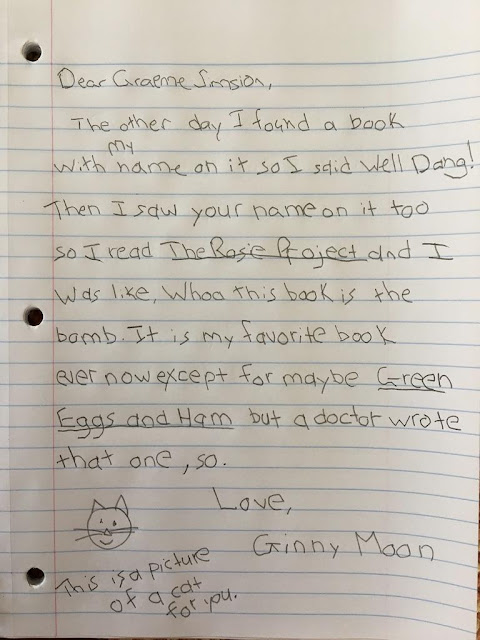 Also, I should tell you that Ginny writes letters to people regularly! If you’d like to read them, and follow her latest adventures, you can sign up for my free monthly newsletter at http://benjaminludwig.com/mailing-list/.  Truth be told, I didn’t want to say goodbye when I finished writing the book, so this is my way of letting her live on.

What do you want people to take away from the novel?
I want people to make a point of listening – especially to children – when someone says something is important.  And I want to raise awareness for kids who are in foster care, or in need of an adoptive home.  There’s really no reason on earth why any child should be without a place to call home.

What advice would you give someone considering becoming a foster parent?
I’d say give it a go!  The training alone will help you figure out if you’re suited for the work.  I think that anyone who has the desire has the capability, when it comes to foster care.  Fostering is really just an extension of your ability to parent, so I think most people can be quite good at it.  There are so many kids who need a place to stay.

How did you celebrate your pub date for your debut novel?
My pub date was May 2nd, so we celebrated the night before (May 1st) with a launch party at Water Street Books in Exeter, New Hampshire.  My wife was there, and all my colleagues from Dover Middle (the school where I taught), as well as a lot of friends from the University of New Hampshire.  Then on May 2nd I flew to Chicago to start my book tour.  I’ll be in 16 different cities from May 2nd to June 1st, though I come home on the weekends (mainly to do laundry!)

The story of a lost girl searching for her forever home.

Everyone tells Ginny that she should feel happy….

After years in foster care, fourteen year old Ginny is finally with parents who will love her. Yet despite finding her forever family, she knows she will never stop crafting her Big Secret Plan of Escape.

Because something heart-breaking happened a long time ago – something that only Ginny knows – and nothing will stop her going back to put it right…
Posted by Sharon at 06:30